York Minster, York, UK Content from the guide to life, the universe and everything 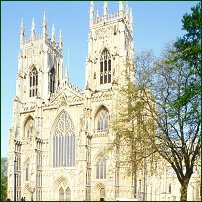 York Minster1 is arguably one of the finest cathedrals in the United Kingdom. It is the largest Gothic cathedral north of the Alps and towers over the city of York in northern England, visible from almost anywhere in the city and nearby since there is a rule that no building can be constructed over its height.

York was first built in Roman times, but the first cathedral in the city was Saxon. It was a wooden church built specifically for the baptism of King Edwin of Northumbria in 627, supposedly built on the site where Constantine was proclaimed Roman emperor. It was then rebuilt in stone on the same site, but was lost to fire some centuries later as the Normans fought to gain control of York in 1069 after their conquest. Unfortunately, however, no remains of these early cathedrals have been found.

In 1080, the Normans under Archbishop Thomas of Bayeux began constructing a new cathedral on a different site, which partially overlaid the remains of the old Roman fortress. Completed within about twenty years, this is the basis of the Minster which still stands today, though it was certainly quite different in appearance. There was some expansion in the twelfth Century but the major changes took place the following Century under Archbishop Walter Gray. Therefore the major phases of construction spanned the thirteenth to the fifteenth Century.

The first change to be made was the construction of the North and South transepts. These were not completed until after Gray's death, but were followed in 1291 by the beginning of the building of the Nave which took a huge seventy years to complete. After this attention turned to the East end of the Minster where the Quire and Lady Chapel were built, which was quickly followed in 1407 by the collapse and subsequent rebuilding of the central tower of the cathedral. The tower was not complete until 1433, a sign of how long such complex craftsmanship took in the medieval period. The final major piece of construction was the Western towers, completed in 1472.

In 1829, a man named Jonathon Martin deliberately set fire to the Minster, causing significant damage which took three years to repair. In 1840 an accidental fire led to the destruction of the roof of the Nave. Yet another fire occurred in 1984, which was so severe that the roof collapsed and damage was done to the Minster's Rose Window2. The damage took four years to repair, with much help from the public.

The weight of the Central tower led to fears that it could collapse at any moment, which would obviously be disastrous both historically and archaeologically and to anyone in the Minster at the time. Accordingly, work was undertaken from 1967 to 1972 to prevent this. The precise action taken is explained on the audio tour of the Minster's Undercroft, where the concrete and metal used to keep the tower where it can also be seen.

A good idea of the layout of the Minster can be attained from the virtual tour on the cathedral's website.

The Minster is a must-see for most visitors to the city because of its age and beauty, such as the Rose window, the largest stained glass window in Britain. Visitors for tourist purposes are required to pay a small fee to enter the cathedral. However, there are three main parts of the Minster to see: the main church, the tower, and the undercroft. It is possible to buy a ticket which allows entry into the tower only, the undercroft only, or a combined ticket allowing access to the minster and the undercroft. The undercroft includes a audio tour3 around the foundations of the Minster explaining its history, while the view from the tower on a clear day is well worth the trek up the stairs - all 275 of them.

The York Minster has 128 stained glass windows, containing more than one million pieces of glass in total. One of these is the beautiful and very famous Rose Window, located in the South Transept. This contains 73 panels of stained glass and has a diameter of 6.8 metres (22 feet 4 inches). The window also features Tudor roses, which are a combination of the red rose of Lancashire and the white rose of Yorkshire. These refer to the union of the Houses of Lancaster and York following the marriage of Henry VII and Elizabeth of York in 1486.

During the fire of 1984, the glass was cracked into 40,000 pieces. The damage was repaired in the workshop of the York Glaziers Trust, close to the Minster. This involved much scientific research to find an adhesive to rejoin the tiny fragments. The restored glass was seen for the first time on 4 November, 1988 when the 'Dedication of the Restored Roof and Vault' took place in the presence of Queen Elizabeth II.

The Minster also has a small gift shop.

The Minster is not just a site of interest to tourists. It is also a working church which holds regular services. It is also the centre of the Diocese of York, and is presided over by an Archbishop. The current incumbent is Archbishop John Sentamu. Despite its age, the Minster has modern aspects too - it even offers podcasts on its website.

At the present time, the east front of the Minster is undergoing restoration. Given the age of the building, such work is regularly needed, but the scale of the problem is such that the entire Great East Window is being removed and the total restoration project will take 10 years and £30 million to complete.

1A minster differs from a cathedral in that it either is or was originally connected to a monastery. In the case of York Minster this would presumably mean St Mary's Monastery, which is very close to the Minster.2The window is in the shape of a heart and is known as the 'Heart of York'.3Available in several languages.4The other is the University of York.