Eboracum: Roman York Content from the guide to life, the universe and everything 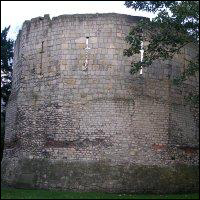 Modern-day York, (in the northeast of England, in the county of Yorkshire) is a development of the Roman town of Eboracum. Underneath the foundations of today's city can be found the remains of a thriving and important Roman town. The name 'Eboracum' most probably means 'place of the yew grove'. The town was the last major Roman town to be founded in Britain, and probably had no more than 3,000 civilian inhabitants. Eboracum was in the territory of the Brigantes, the largest British Celtic tribe, but it was not their main town.

The town was founded when in AD70 the Governor of Britain, Petilius Cerealis, marched from the fortress at Lincoln with the IX Legion to invade the territory of the Brigantes. The Brigantes were defeated and the fortress at Eboracum was built in AD71, before the conquest of Yorkshire was fully complete. It was from this that the town developed.

The area of the Vale of York was extensively occupied in pre-Roman times, but Eboracum itself was built in an excellent natural site on the junction of the rivers Ouse and Foss, providing water and a strong element of defence as well as allowing ships to reach the town for trade. The town itself was above the surrounding plain, which kept it dry despite the river, and was another defensive factor. There was excellent agricultural land and easy communication with other Roman areas to the south.

Outside the fortress were two distinct settlements. One, called a canabae, was the original native settlement and was located on the opposite bank of the river to the fortress. There also developed a vicus, a settlement initially relying on the fortress for its livelihood. This would originally have been small, perhaps families of soldiers and a few traders, but would quickly have developed to encompass taverns, shops and other facilities. Ermine Street, a major Roman road, ran through the town.

The reason Eboracum was one of the later Roman towns to be founded after the conquest of Britain in 43AD by the Emperor Claudius, is because it is quite far north and the Romans wanted to be sure of the security and peace of the south before pushing northwards to consolidate the conquest. The Roman historian Tacitus tells us that the Brigantes were the most populous of the British tribes and that there were a series of bloody battles between them and the Romans, which led to their land being overrun. A likely reason for the invasion was that the tribe had largely turned against their queen, Cartimandua, who was an ally of the Romans. The Brigantes had been a client kingdom1 and a buffer against the hostile northern tribes, but now they had become a threat. Cerialis needed a strong base of operations to contain the 6,000 or so men in a legion in order to pacify the area.

The fortress was strengthened in several periods of its history and in AD108 the original timber fortress was rebuilt on the same site in stone for added protection. This was common Imperial policy – military fortifications were first built in timber, and then rebuilt in stone when the area was peaceful enough to allow this disruption. The walls of the town were rebuilt after serious damage in raids and the town continued to grow.

Around 200AD, the province of Britannia was split into two smaller provinces, and York was awarded the honour of being made capital of Britannia Inferior. This meant that it remained an important military base and was also the seat of the provincial governor, which of course brought more recognition and prestige to the town in addition to an increase in trade.

In 208AD York was further honoured by the arrival of the Emperor, Septimus Severus, and his son Caracalla. They lived in the town for several years while resistance in the north was subdued. From York, they ruled the whole Empire, requiring a huge retinue of followers, guards, clerks and so on. The Emperor actually died and was cremated in the town.

By the early 3rd Century, York had all the typical public buildings of a large and important town in the Roman Empire: baths, a forum and basilica complex and other buildings such as shops, as well as facilities like a public water supply. It is also around this time that York was probably upgraded to a colonia - a high status type of town, so York was one of the most important towns in the Empire at this time. It is not certain that York became a colonia, but it is highly likely. In a colonia, land was set aside for retired Roman soldiers so that they could live in comfort and relative prosperity. The soldiers would have been those of the town's fortress, many of whom would want to continue to live in the town they had got used to, where they might have had a family; and perhaps a few others. It also shows that the town had grown from a small settlement to provide for the needs of the soldiers into a fully-fledged town.

Around AD300 the Emperor Diocletian changed Britain from two provinces into four: York remained a provincial capital, but of the new province Britannia Secunda. The legate of the VI Legion became Governor. Before long, though, a new position, that of Dux Britanniarum (Duke of Britain) was created to take the military responsibility away from the Governors. His base was at York, which led to the defences of the fortress and much of the town being rebuilt on a grander scale.

The Emperor Constantius died in York on 25 June 306, while in the process of continuing his attempted conquest of Scotland. Constantine, his son, who was with his father during the campaign, was heralded as Emperor in the town as soon as his father's death became known. A statue of him can be found in the city today.

In time, the VI Legion was removed from York due to attacks on the Continent against the crumbling might of the Empire, and not long after (in 410AD) the Emperor Honorius told the British to defend themselves against the threat of attacks from the Saxons and other invaders, and the Roman period was over in Britain.

The original function of York was to provide services to the soldiers of the fortress and to the army generally. Services for soldiers included taverns and shops, while tradesmen serving the army included blacksmiths, potters and other manufacturers. The Britons quickly realised the economic potential of selling to the army, as an army always needed to be sure of its supplies, whether food, pottery, uniforms or similar important items. The most important was food, because if the army ran out of food they were at great risk. The legionaries and army provided a stable market for business.

Of course, the reason for the establishment of the fortress was to keep a strong military presence in northern England. It would have overawed any rebellious Celts in the area, particularly in its early days. However, in time, many of the Brigantes and other tribal groups moved to live in the town, mixing their cultures with that of the Romans to form a Romano-British culture.

York was a major marketplace for people from miles around. Its location on Ermine Street, one of the most important Roman roads, and its proximity to other roads nearby meant that trade was easy and fast.

The main town defence was the walls. Those by the River Ouse were three feet and four inches2 thick and may have been nine feet and ten inches3 high when built. The walls of the legionary fortress have been partially followed by the later medieval wall, and it is reasonable to suppose that the same process must have occurred, at least in points, in the town.

Parts of the wall have been located in a medieval mound near an old railway station, and another part was discovered when digging a tunnel to an air raid shelter. This wall was about 5.9 feet4 thick and made of roughly-coursed rubble masonry. It appeared to be heading to one of the Roman roads entering the town, where it may be assumed there was a gate. The most intact portion of the walls remains in the 'Multiangular Tower', built during the reign of Septimus Severus. The tower has ten sides and is almost thirty feet5 tall.

Many of the inhabitants were soldiers, followed by tradesmen, labourers, farmers and so on. Generally speaking the local tribe, the Brigantes, were not anti-Roman6, so it is likely that many of them wanted to partake in this new civilisation of the area. York may also have been the urban home of the more wealthy Northern families. Richer families would have a townhouse, (where they would conduct their business and possibly serve as local officials) and a countryside residence. The inhabitants would have been largely natives but many would also have been from other parts of the Empire, making the town quite cosmopolitan.

Two of the main streets of the Roman town, the Via Praetoria and the Via Principalis still exist and are now known as Stonegate and Petergate. The remains of the Roman bathhouse are located in St Sampson's Square in the cellar of a pub7. In the summer you can tour the city from there accompanied by a Legionary. The 'Multiangular Tower' (see above) can also be seen in the Museum gardens. Finally, the remains of some of the fortress are to be found in the undercroft of York Minster.

1A native kingdom allowed to largely run themselves and to keep their own rulers – though usually only for a generation. This meant that the Romans could use them as safe territory and did not have to conquer them.2One metre.3Three metres.41.8 metres59.1 metres.6After their defeat by Petilius Cerealis, they became peaaceful and friendly again.7A small fee is charged to see it, but there are information boards and staff who will answer questions.