The Romans in Britain: Towns and Villas Content from the guide to life, the universe and everything 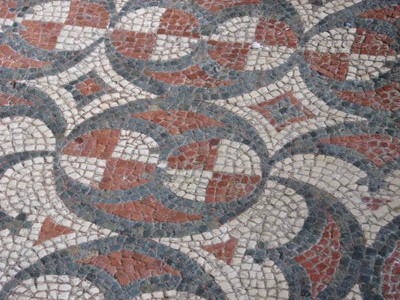 Roman towns were a vast improvement on the small Celtic settlements. Those had simple wooden buildings and were not towns in either the Roman or the modern sense of the word. The Romans operated on a much larger scale: their towns had shops, houses and an array of public buildings. Apart from those listed below, these might also include temples and public cemeteries.

Before the Romans, the population of Britain had lived in small farmsteads or hillforts such as the mighty Maiden Castle. These farmsteads were generally protected by a gate joined to an earth bank or palisade fence, with storage huts and living areas inside these modest fortifications. The hillforts, however, were much better defended (although this didn't stop the disciplined Roman army capturing them). However, towns as we know them were a Roman idea. They developed existing Celtic settlements or just began new ones.

After the invasion, some rich people began to live in country villas, sometimes the centre of an agricultural estate. It is feasible that Roman villa owners let at least some of their land to tenants to farm. While many people seem to have the idea of everyone in Roman Britain living in large and luxurious villas, it has been calculated that only 1% of the population actually did. Many people lived in original Iron Age settlements or Roman period settlements built in the same form as the earlier Celtic buildings.

Other Entries in the h2g2 Roman's in Britain Series

1Under-floor heating systems, fuelled by furnaces.2There is no evidence of such contests in Britain.3Earlier villa types did not have this feature.