The Romans in Britain: Minerals Content from the guide to life, the universe and everything 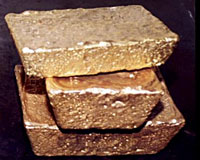 One of the main reasons for the Roman Emperor Claudius to invade Britain in 43 AD was for its minerals. Britain was said to be a very rich source of minerals that the Romans needed, such as lead, tin and iron.

Roman Usage of Minerals in Britain

At the time of the Flavian Emperors (late first and early second centuries AD), the main suppliers of tin to the Empire were in Spain and Dacia (modern day Romania). However, mines in both of these locations had been forced to close. Britain, where tin had been mined for centuries in Cornwall, supplied the deficit.

Although not particularly useful alone, it could be mixed with copper to produce the alloy, bronze. Bronze was much more widely used, for example, in jewellery and other decorative features as well as some weapons and the like.

The Romans believed that there was substantial gold in Britain. In fact, there was only a small amount. The only Roman gold mine in the country that has been discovered was at Dolaucathi in Wales, which was a large mine with shafts up to 145 feet down. When the Romans conquered Wales in 70 AD, they built huge aqueducts to move water into reservoirs, before releasing it to create a flood. The mass of water removed the top layer of the earth, uncovering the gold deposits.

Some of the gold may have been worked on-site. Remnants from gold-working operations have been found in London, Cirencester and Verulamium (modern St. Albans).

This was not found on its own in Britain, only mixed with lead. The Romans used a process called cuppelation to separate the lead from the silver using very high temperatures.

Silver was found in the Mendip Hills in Somerset and West Riding in Yorkshire. It was used for jewellery, religious plaques and tableware. Silver ingots have been found, the earliest one dated 49 AD, only six years after the invasion of Claudius. Rapidly exploited, silver was obviously important.

Little copper was mined in Britain before the arrival of the Romans. They mined it because they needed it to mix with tin to make bronze. It was also used on its own, though very rarely. It could also be mixed with zinc to create brass, but it was the creation of bronze objects which became an important industry. Bronze was used for statues. Copper was found in Shropshire, Anglesey and other parts of north Wales. Eighteen copper ingots have been found in Anglesey and what was formally known as Caernarfonshire, now Gwynedd.

Iron was exported to the continent from Britain, where it was readily available. It was found in Sussex, the Midlands, and North Wales and was used in the manufacture of many metal objects, such as nails and anything which required strength or a sharp edge. The slag from the smelting process was re-used in road building.

Lead, found in the Mendip Hills, was not just important for the silver it contained. It was also used for waterproofing and in the manufacture of pipes and tanks1. It could be mixed with tin to produce pewter, which was used for cheap tableware. Despite its great age, the lead lining in the Great Pool of the Roman Baths in Bath is still in excellent condition and is even waterproof!

Coal was mainly mined from the surface, although there some deposits of coal underground, which were also mined. It was used for heating Roman baths and hypocausts2 in forts and villas and so was quite important in cold, wet Britain.

Salt was a valuable commodity and was extracted from sea water. It was used in cooking and the preserving of food for long periods. Soldiers in the army were given salt rations, though this later changed to giving them the money to buy the salt themselves3.

British pearls were well regarded abroad. Jet, marble and shale were also found and used by the Romans in the province of Britain. Shale and jet were used for jewellery and shale was also used in furniture. Marble was used for commemorative inscriptions, which were common in Roman Britain.

Originally many of the mines were under direct control of the Empire. They needed the metals and thought that controlling the mines themselves would reduce the chance of theft. This was especially true in lead mines as lead was constantly required around the Empire.

The first Roman miners in Britain were the army, but before long the Romans were forced to subcontract, even in the important lead mines. Working in the mines was used as a punishment for criminals - 12% of the miners died each year. Because of this, miners were slaves, prisoners of war or criminals. It was worse for gold miners, who worked underground. They often died of lung diseases from the dust as well as having to avoid rockfalls and shaft collapses.

Much of the money from the mines still went to the Romans, however. Half of the material from the lead mines went directly to the Empire, and they bought much of the rest of the products of the mines on the open market. Most of the gold mined also went to Rome, even though the mines were not directly controlled by them. It was added to the Treasury or used for coins.

Other Entries in the h2g2 Roman's in Britain Series

1Which presumably led to some cases of lead poisoning!2An under-floor heating system which worked by allowing heat from a furnace to circulate under the floors and sometimes up the walls of houses – but only for those who could afford it.3This was called salarium argentum which meant 'salt money', which is where the English word 'salary' comes from.