Shropshire, UK Content from the guide to life, the universe and everything 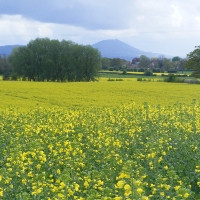 Shropshire, otherwise known as Salop1 or Shrops, is the largest inland county in England, covering 1,348 square miles. It is situated in the West Midlands, and shares borders with the English counties of Cheshire, Staffordshire, Worcestershire and Herefordshire, along with Powys and Clwyd in Wales. Shropshire is a very rural county, and has no cities. Its largest town is the new town of Telford (which was officially designated as such in 1968), and its county town is Shrewsbury2.

Shropshire as a county was defined in the 11th Century, and its area has remained largely the same ever since. The county is divided for administrative purposes into two areas: Shropshire, and Telford and Wrekin.

People from the county are known as 'Salopians', and in 2005 the number of inhabitants of the county was put at 286,700, which is a small population for such a large county.

Shropshire has been dubbed the 'geological capital' of the UK as one can find not only lead, coal, copper, and iron ore within its borders, but also almost every type of rock to be found in Northern Europe can be seen in the county.

The History of Shropshire

Shropshire has been continuously inhabited since ancient times, with remains of Bronze Age, Iron Age and Roman settlements around the county. It has also been an important county historically, with the first battle of the Wars of the Roses, the Battle of Blore Heath, being fought on the Shropshire/Staffordshire border in 1459, only 56 years after the famous Battle of Shrewsbury, a rebellion against King Henry IV.

During Anglo-Saxon times, Shropshire was within the region known as Mercia, along with most of central England. Shrewsbury was already the main settlement of the county, and its elevated position and fortified status made it an important strategic location on the River Severn. During William the Conqueror's reign of England, Shropshire was the scene of a large rebellion against the King, which led to William razing Shrewsbury to the ground in anger. One of the King's most trusted aides was given charge of Shropshire, highlighting its importance as a county bordering the Welsh, from whom there was a constant threat of attack. Shropshire was used as a base from which William could launch attacks into Wales, to try and claim the as yet unconquered lands. At one time, there may have been as many as 70 motte-and-bailey castles in the county. Shrewsbury Abbey also played an important role during these times, becoming an important focus for pilgrimage, second only to Canterbury.

Later on, Ludlow in Shropshire became home to three future Yorkist kings of England - Edward IV, Edward V and Richard III, as were the two princes locked in the Tower of London, and allegedly murdered by Richard III.

Shropshire played a vital role in the Industrial Revolution in England, and it is home to the world's first cast-iron bridge, which can be found, appropriately enough, in Ironbridge. The county was criss-crossed by canals, which provided an easy way of moving freight around, and contributed to its important industrial position in the country. Thomas Telford, a Scot who came to Shropshire at the age of around 30 in 1786, set to work on many engineering projects in the county, and it is difficult to travel anywhere in Shropshire without seeing one of his contributions. It is after him that the new town of Telford was named, and his likeness can be seen leaning on the word 'Telford' in Telford Square.

Shropshire played its part, along with the rest of the UK and beyond, in both World Wars. Memorials to the dead can be found in towns and villages all around the county. During World War I, many Shropshire lads volunteered for the King's Shropshire Light Infantry, along with the Shropshire Yeomanry and the Shropshire Royal Horse Artillery, which fought mostly in France and Belgium (including in Ypres and the battle of the Somme). However, some fought as far afield as India and Singapore.

During World War II, the town of Newport had a lucky escape as a German bomb fell on its outskirts. The bomb was apparently destined for Manchester, but most of the bombs in that raid missed the city altogether. The town was spared large-scale death and destruction, but even so, around half of the town's buildings were damaged in some way. According to a local newspaper, the only casualties were a rabbit and a frog.

According to recently-discovered documents, Hitler had big plans for Shropshire had his forces managed to invade England. It seems that Bridgnorth was earmarked as his invasion HQ as it was a safe town, away from big cities but still served by an airbase.

Shropshire wasn't just an important military site in the past - it is still home to RAF Shawbury, which houses the School of Air Traffic Control, and RAF Cosford3, along with an MoD base at Donnington. The latter is the home of the Army Base Repair Organisation (ABRO), which has several strategically located sites around the country. ABRO is the UK MoD's key engineering service provider, with customers including the British Armed Forces, local and overseas governments and Emergency Services.

As mentioned above, Shropshire has no cities, but it does have 22 settlements which are officially towns, and countless villages. Some of the latter (such as Albrighton) are actually larger than many of the towns. The official towns in Shropshire are:

Shropshire has produced many people who have gone on to become world-famous. Here are just a few of them:

Shropshire has always been a popular tourist destination, and is easily reached by car or train from almost anywhere in the country. The county is home to 32 castles, several stately homes, and many gardens, galleries and museums to suit every taste.

Ironbridge is the perfect place for any tourist to visit. It is situated within the area of Coalbrookdale, which was the birthplace of the industrial revolution in England, and as such contains a lot of industrial history. Not only can the world's first cast-iron bridge be seen (and walked across) in a lovely rural setting, but this UNESCO World Heritage Site also boasts ten Ironbridge Gorge Museums. 'Passport' tickets can be bought which allow one visit to each museum with no time-limit, so even if you can't see everything in one day you can come back next week, or even next year. The museums cover everything from a Victorian town where volunteers in period costume demonstrate the way Victorians lived, to the Tar Tunnel where you can still see tar oozing from the walls.

Not only is Shrewsbury a great town to go shopping in, it also has its fair share of cultural attractions. The best way to explore is on foot, and guided walking tours are available from the Tourist Information Centre every day during the summer, and on Saturdays in winter. Shrewsbury Abbey and Shrewsbury Castle are worth seeing, and there are numerous art galleries in the town. The river Severn makes its way through Shrewsbury and there are boats for hire if you like rowing or canoeing. Angling is also possible, but you do need a licence.

Just outside Shrewsbury is Wroxeter Roman City, which was the fourth largest city in Roman Britain. There is an audio tour of the site, and also an exhibition to tell you all about it.

Of course, if history isn't your thing, there's always football. Shrewsbury is home to Shrewsbury Town Football Club who play at the Gay Meadow in the centre of the town.

If food is your thing, you need to visit Ludlow. It boasts more Michelin stars than anywhere other than London, and whatever your tastes you will find some food to tickle your fancy. If you prefer sweeter things, however, take a trip to Market Drayton and try some of the famous gingerbread.

For those who like being scared, Shropshire is the perfect place. There are over 500 supposedly haunted sites in the county, and there are two car trails which take in many of these.

If amazing natural scenery is your thing, then Hawkstone Historic Park and Follies is where you need to be. You can enjoy a leisurely stroll through caves and grottos, across bridges and through ravines, up hills and through woodland, while seeing magnificent views of Shropshire along with Hawkstone's follies. You might even meet King Arthur himself. Hawkstone Palk also boasts two 18-hole championship golf courses and a 6-hole course.

There are many places to go if you enjoy walking, such as the Wrekin, the Stiperstones5, or the Long Mynd, but if something less strenuous is your thing, then there are plenty of nice little shops to mooch round in one of the many market towns, like Bishops Castle.

If something more adventurous is your style, why not join the Midland Gliding Club which runs gliding lessons and competitions over the Long Mynd, providing a new way to see some of Shropshire's beautiful countryside.

On Wenlock Edge the wood's in trouble;
His forest fleece the Wrekin heaves;
The gale, it plies the saplings double,
And thick on Severn snow the leaves.

One of Shropshire's claims to fame is AE Housman's A Shropshire Lad, a collection of poems all about the county. He mixes the styles of verse and English ballad to paint a picture of a half-imagined Shropshire that captures the imagination. It was first published in 1896 (it has never been out of print since) and contains 63 poems of different lengths and styles, covering the themes of adolescence, the Shropshire countryside, and premature death (usually by war or suicide).

Housman himself wasn't a Shropshire lad at all, having been born in Worcestershire and educated at Oxford University. He spent much of his later life in London, and used A Shropshire Lad as a vent for all the emotions he was feeling but felt unable to express6.

Another author to write about Shropshire was Malcom Saville. His principle works included The Lone Pine Club, about a group of children who formed a secret society in wartime Shropshire. These books have been read by many children, and have been instrumental in forming an image of the county in many young minds.

1An abbreviation which fell out of use due to its similarity to a French insult, but which is once again becoming commononplace.2Pronounced variously as 'Shrews-bree', 'Shrows-bree' or even 'Shoos-bree'.3Which is the site of a popular RAF museum, holding one of the largest aviation collections in the UK.4They are still run once a year.5Along which, the Devil's Chair can be seen. This rocky outcrop is a must-see for anyone interested in the myths and legends of the county.6He was left heartbroken after his romantic advances towards a friend, Moses Jackson, were rejected. This in a time when homosexuality was punished by prison. He had also suffered the death of another close friend.