Jonathan Martin: The Man Who Burned York Minster Content from the guide to life, the universe and everything 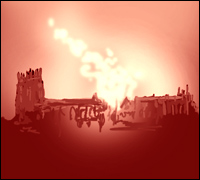 The City of York, in the north of England, has been dominated for a thousand years by a great church. Even as recently as the early 19th Century, few among the townspeople would have known anything of the origins of the cathedral in their midst. Local folklore did not recall a time before the Minster. Its scale and grandeur far surpassed any other building that the general populace had seen or could imagine, and so the veneration of this House of God was absolute. For the man who attempted to destroy it, hatred was assured.

The Discovery of the Fire

At around 6am on 2 February, 1829, choristers making their way across the Minster yard noticed sparks rising from the cathedral's roof. As they approached the building, they found that the frost on the ground gave out. Soon they sensed the heat radiated by the walls and saw the glow inside, and they hurried to raise the alarm.

By 7am, the peal of church bells could be heard all over York, but the men assembled to put out the fire were already in difficulties. It became clear that the Minster had been ablaze all night. The choir and its stalls, along with the organ-loft, had been consumed hours before, and the flames had taken hold in the roof-timbers above. In these days before portable pumps, there was no way to fight a fire at such a height.

The nave of York Minster is and was the widest in England. The two files of columns on either side of it stand 16m apart. The design of the Norman architects proved too ambitious, and so the original vault of stone was never completed. York Minster instead possessed a wooden roof, one of the largest in Europe and a marvel of medieval engineering.

The roof was doomed. The fire-fighters were forced to evacuate the choir area as debris began to rain down. Soon, molten lead was streaming from the spouting. A little before noon, the first of the cross-beams failed, and the others succumbed in quick succession. In a series of progressive collapses, the blazing timbers plunged into the ruin of the choir.

Now, at last, containment was possible, and the people of York strove heroically to save the rest of the structure. The great stone screens that demarcated the transept and the Lady's Chapel helped to contain the fire, and long after midnight it was finally put out. The damage had been confined to a much smaller area than was at first feared, but within that area the devastation was complete. The heart of the cathedral was left open to the sky, and the floor of the choir had partially collapsed into a void beneath. What remained was strewn with baking-hot rubble.

Even before the fire was out, the authorities suspected arson. Starting with an anonymous letter received in December of the previous year, there had been a series of them warning of divine judgement on the clergy. All four of these letters were written in the same hand. They were long and pedantic, and had been dismissed as the rantings of a fanatic. Now the benefit of hindsight provoked a more careful reading, and phrases such as 'Your great Minsters and churches will come rattling down upon your guilty heads' came to light. So did the initials 'JM', and an address.

There was nobody at home at 60 Aldwark, but neighbours described a man obsessed with divine retribution. It was soon found that the suspect had once escaped from Gateshead Asylum, where he had been confined after threatening to shoot the Bishop of Oxford. A warrant for the arrest of Jonathan Martin was issued immediately.

A week after the fire, Martin was apprehended near to his family's home in Hexhamshire. He was sheltering in the house of a relative, and made no attempt to resist detention or protest his innocence. Instead, he declared that he had carried out God's will, and the vehemence of his claim appalled and infuriated his captors.

A lady among the crowd that watched the fire is said to have compared the spectacle to the paintings of an artist called John Martin, noted for his apocalyptic landscapes. The story is surely apocryphal, or else a remarkably perceptive attribution. The scene was the literal handiwork of the artist's brother.

The Martins of Haydon Bridge were, by any standards, an unusual family. Jonathan's father, Fenwick Martin, was a fencing instructor: an improbable calling in Northumberland even in Georgian times. As well as the younger brother (John) who became a famous painter, Jonathan had an elder brother, William, who dedicated 20 years of his life to the pursuit of a perpetual motion machine. The womenfolk were perhaps less remarkable, and sister Ann seems to have passed unnoticed, but mother Isabella appears to have been largely responsible for her offspring's religious fervour.

At his mother's knee, young Jonathan learned that there was 'a God to serve, and a Hell to shun, and all liars and swearers are burned in Hell'. He experienced visions from about the age of eight, and he became convinced that thunderstorms were visited on the neighbourhood as a divine punishment for his own unconscious sins.

Jonathan served an apprenticeship and took employment as a tanner, but in 1804, at the age of 21, he was press-ganged into the Navy. He spent six years at sea, in spite of numerous attempts at desertion. According to some accounts, he suffered a skull fracture during this time, and this is said to have compounded his mania.

A peaceful interlude followed, and Jonathan married and fathered a son who was named Richard. However, by 1814 he was becoming increasingly excitable, and he soon embarked on a reforming crusade against the establishment of the Church of England. He declared himself to be a Wesleyan, only to be renounced by the local Methodists, who were alarmed by his bizarre behaviour. He began to draw strange pictures of his visions, and to write impenetrable tracts. By the time he was sent to Gateshead Asylum, even his few remaining friends considered him to be mad.

Jonathan Martin was sent for trial in York on 31 March, 1829. His testimony to the court has provided us with a precise account of how the fire was started. After attending evensong on Sunday, 1 February, Martin hid in the shadows until the Minster had emptied. He waited for the sound of the great doors being closed for the night before climbing over the railings of the choir. He had brought a razor with him, and used it to cut strips of velvet, tassels and fringes from the Bishop's pew. He piled this material onto one of the wooden stalls, spoke a prayer, and struck his flint. Once the fire was established, he threw on cushions, curtains and hymnbooks. Then he made his escape by climbing scaffolding in the north transept, breaking a window, and lowering himself to the ground outside using a bellrope.

Martin's defence was conducted at his brother John's expense, but it was wholly futile because Jonathan spent two days broadly agreeing with the prosecution's version of events. He declared repeatedly that his attempt to destroy the Minster had been directed by God, and that by following these instructions he had absolved the people of their sins. Martin is said to have smiled a great deal during his trial, and that every time he did so, there were howls of anger from the public gallery. The courtroom was so full that at times the lawyers could find nowhere to sit. A detachment of yeomanry was in attendance throughout, because the judge feared that the prisoner might be lynched.

On 2 April, the jury was instructed to interpret Martin's performance as a guilty plea, and to pronounce only on his sanity. If judged sane, Jonathan Martin would hang. Much to the chagrin of the public, it took the jury only seven minutes to decide that the burning of the Minster was the act of an unsound mind.

Jonathan Martin was sent to Bedlam for the rest of his life. He died in the asylum nine years later on 26 May, 1838, aged 56.

The Clerk of Works at the Minster, John Browne, directed the clearance of the rubble and the early stages of the reconstruction. He quickly realised that the columns of the nave extended far beneath the ruined floor of the choir. His excavations revealed the true extent of the Norman crypt. Today, this space is open to the public as the Undercroft, and houses a museum of ancient relics from the site.

Richard Martin, Jonathan's son, was adopted by the artist-brother John Martin. He himself proved to be a gifted artist, and exhibited at the Royal Academy. Richard seems to have inherited his father's instability, however, since he committed suicide by cutting his throat three months after Jonathan's death.

York Minster was fully restored over a period of three years following the 1829 fire, though the great choir and its organ (built in the 16th Century at the bequest of John Thoresby, Archbishop of York) were not accurately reconstructed. Scant record of their original appearance now exists.

The Minster has suffered two major fires since Martin's arson. The first, in 1840, was the result of the carelessness of workmen who left a candle burning in the south-west tower. The nave roof was thus seriously damaged for a second time within a decade of its replacement.

The most recent and famous fire occurred in 1984, causing extensive damage to both the roof of the south transept and the very beautiful Rose Window. This fire was almost certainly caused by lightning. Jonathan Martin, the man who saw judgement in thunderstorms, might finally have been shown the error of his ways.