The University of York, UK Content from the guide to life, the universe and everything 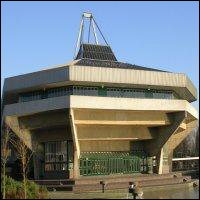 The University of York, not to be confused with York University, which is in Toronto, Canada, is one of the most highly regarded universities in the UK, despite its small size and relative youth as an institution. The University is located, fairly obviously, in York. It was founded in 1963 and has around 10,000 students in total.

In the 2007 The Times Good University Guide, the university dropped from seventh in the UK to fifteenth due to changes in the type of information collected. The Guardian's 2005 University Guide ranked York at number eight in the country. The university is also known for very high teaching quality, achieving the top ranking for teaching in the assessment of 2003. All of this means that competition for places is fierce with only about 11% of applicants being awarded a place. Almost 70% of students go on to achieve firsts or 2:1 degrees.

The university campus is located next to Heslington village outside the city centre. One side of the campus is mostly surrounded by fields, the other by homes. The city centre is an easy walk, or the number four bus service will get you there in ten minutes or so.

York is a collegiate university, in that all students, with the exception of students of the Hull York Medical School, are placed into a college, of which they remain members throughout their time at university. Colleges act as a glorified hall of residence, as almost all contain a bar, canteen, laundry and so on. Most students live in their college during their first year at university and it is also possible to return in later years, though the majority of students prefer to take out private rentals in the city.

The campus is reasonably small, and it is easy to learn your way around. As the university was built on marshland, a lake was constructed in the centre of campus to collect the drained water, around which the buildings were arranged. During a cold winter, the lake can freeze (at least partially), and students are strongly advised to visit the doctor if they should come into contact with its fetid waters. Being built around a lake, the university has a great deal of wildfowl. If you have a terrible phobia of ducks, York is not the university for you. In fact, killing a duck is an offence which will see you expelled, while if you kill a person, you can return after your prison sentence is complete! A well-known and rather gruesome campus story concerns a Chinese1 student whose cleaner discovered a pair of duck's feet in his bin. It turned out that he had caught, killed and eaten one of the campus ducks.

Most of the university's departments are based in colleges but a few others have their own buildings, including the Physics and Electronics building which dominates the centre of campus.

Next to this is Central Hall, a large venue with a stage and seating for several thousand people, which has played host to concerts by the Boomtown Rats, among others. During their concert, the building was damaged by the number of people standing up and dancing so now no concerts of this kind are held. It is now used for classical concerts, though the BBC Philharmonic Orchestra apparently considers it one of the two worst venues they play in2. Rumour has it that the acoustic tiles on the roof were attached the wrong way around, which would explain this. Central Hall is a very odd-looking building, leading many students to compare it with a grounded spaceship. It is also used for graduation ceremonies, much to the annoyance of students, who point out that students of York St John University, the other university in the city, get to have their graduation in York Minster.

Heslington Hall, near Derwent College, is a beautiful manor house used to house the university's administration. Near this is the Quiet Place, a small area of grass and topiary designed as an area for students to relax. Also rather thoughtful is the fact that many of the paths around campus are covered - particularly useful when the weather is bad.

At the back of Vanbrugh College is Market Square, an area with shops for student use. These include a small and somewhat expensive supermarket, a bookshop, stationery shop, insurance agency, and Your:Shop, which sells a mixture of items from food to magazines and is run by the Students' Union3. Nearby is Your:Books, which sells second-hand books.

The Sports Centre near James College has a gym, astroturf pitches, a gravel running track, and 'the tent' a large structure which opened in 2006 and contains 3 separate areas which can be used for a number of sports such as badminton, five-a-side football, basketball and so on. Over the road from the Sports Centre next to Halifax College are the University's playing fields.

The University's main library and the Borthwick Institute of Archives are located near Alcuin College.

In the centre of York is King's Manor, previously the home of the Abbot of St Mary's Monastery, which houses another small library as well as the Archaeology department.

Heslington East is the name of a proposed new campus the university is hoping to construct near the existing campus and Heslington. This would provide a large expansion to the university, including new departments such as law and dentistry, new colleges to house the extra students this would attract, and some new facilities. The Students' Union is pushing for facilities such as a swimming pool and a concert venue, both of which the university currently lacks.

The development, however, is very contentious. Many local residents are not happy with the change it would bring to the area. Academics are concerned about the cost and the drop in teaching quality which they feel is the result of the focus of some staff on the new plans. Students in general like the idea of new facilities; but for many, one of the appeals of the university was its small size. This would change if Heslington East went ahead. The current student population is small enough that all but the most insular students are likely at the very least to see someone they know when on campus or even in the city.

York colleges comprise the lakeside colleges and the newer accommodation. The lakeside colleges (Derwent, Langwith, Goodricke and Vanbrugh) are older with a generally poorer quality of accommodation, though this is generally acknowledged to create a better sense of college spirit and solidarity. The newer colleges (James, Alcuin, and Halifax) have better rooms, usually with en-suite facilities. Predictably though, this does cost extra. Despite this, more people apply for en-suite rooms than are available. The University of York also has Wentworth College, a separate college for postgraduate students, though each of the other colleges also has some postgrads. Each college, with the exception of James, has its own bar and cafeteria.

'JCRC' stands for Junior Common Room Committee. Each college has a Junior Common Room or JCR for the use of undergraduates which typically contains a television, comfortable chairs, and probably a pool table and arcade games. The Committee is an elected group of undergraduate students, almost always freshers and second years, who basically run undergraduate affairs at the college. This includes organising events such as club nights and the Christmas Ball, putting on bar quizzes, karaoke nights, providing welfare support to students, organising sponsorship, purchasing college-branded merchandise and so on. Elections are held in mid to late Autumn term, with a bi-election early the following term to try to fill any remaining positions. Halifax does not have a JCR, so its equivalent of a JCRC is the HCSA - Halifax College Students' Association - led by a President, rather than a Chair as the JCRCs are.

For such a small university, York does reasonably well at sports. There are a wide range of clubs from the standards such as football, rugby, netball and rowing to more unusual examples like skydiving, canoeing, pole exercise7, and archery.

York has two annual tournaments against other universities. Varsity is a competition against city rivals York St John, while Roses is against Lancaster University. The name comes from the Wars of the Roses, which pitted the House of York against the House of Lancaster, where York was represented by a white rose and Lancaster by a red one. Roses is considered to be much more important than Varsity, perhaps because it is much older and involves more sports.

York's campus media is uniformly recognised as excellent. The radio station, URY8 is the oldest legal independent radio station in the UK and was launched by veteran DJ John Peel. It was BBC Radio One Student Station of the Year 2005. URY can often be found broadcasting from campus events such as students' union election results night and the Battle of the Bands competition.

The university is also served by two newspapers, Nouse9 and York Vision, both of which have won national student newspaper competitions and are published several times a term. Nouse is generally seen as slightly more upmarket than its rival, but Vision tries to counter this by snarkily referring to Nouse as 'NoUse'.

In addition, the university has several other occasional publications. There is also a television station, YSTV which has been running since 1967. It can be viewed online or at a few locations on campus, though on campus it is helpfully played with the volume off.

The City of York

Whether the city is suitable for you is a matter of opinion. There is no doubting that it is a gorgeous city. Shopaholics will be pleased to hear that it has most high street shops and a number of independent stores. There are plenty of tourist gems to visit too. Clubbers may be disappointed as the city has only a handful of clubs - get the train to Leeds if you are a hardcore clubber - but the city has more bars and pubs than you can shake a stick at. Popular student drinking holes include Wetherspoons, The Lowther, The Kings Arms, and Lendal Cellars.

A number of MPs and former MPs are also graduates of the university.

1The University has a number of overseas students, many of whom are Chinese.2The other is Derby Town Hall.3Known as YUSU - short for University of York Students' Union.4Though all students are of course, free to use any catering outlet, regardless of their own college.5Like many British universities, York supplements its income by hosting conferences during the Easter and summer holidays, putting up guests in student rooms.6Venereal, or sexually transmitted, disease.7Note: that's exercise, not dancing. Even men are occasionally known to attend this club, though their motives are sometimes called into question.8University Radio York.9The odd-sounding name is a blend of the word 'news' and the name of the River Ouse - pronounced 'ooze' which runs through the city.10A largely ceremonial position; the actual running of the university is done by the Vice Chancellor.