Toronto, Ontario, Canada Content from the guide to life, the universe and everything 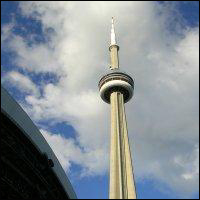 Toronto is the capital city of the Province of Ontario, Canada. It is not the capital of Canada; that's Ottawa, which is also in Ontario. It is located on the north shore of Lake Ontario, at 43° 42' latitude and 79° 25' longitude. It is the fifth largest city in North America, and the largest in Canada. It has also been declared by the United Nations to be the most multicultural city in the world, which a bus ride in any direction of more than a few blocks will tell you is well deserved.

Toronto used to be known as 'Hogtown', because it was a centre of agricultural processing. Locals tend to call it 'Trawna'. And the rest of Canada sarcastically calls it 'The Centre of the Universe', due to what they perceive to be Torontonians' egocentric lack of interest in the geography and affairs of the rest of the country.

Before there was a city called Toronto, there were Mississauga Indian encampments, a French fur trading post, and Fort Rouillé, which the French burned during their retreat from the British in 1759.

In 1793, Governor John Graves Simcoe decided to establish a new town on the site to accommodate the influx of United Empire Loyalists, who migrated to Upper Canada (which is what Ontario was called at the time) from the New England colonies during the American Revolutionary War. Many Canadians still proudly trace their family trees back to Loyalist roots.

The town, named York, was guarded by Fort York, which was destroyed in the War of 1812. Fort York was subsequently rebuilt, and is now a prominent feature on the Toronto tourist map.

In 1834, York became a city and was renamed Toronto, a Huron word meaning 'meeting place'. In 1867, it became the capital of Ontario.

In 1998, the government of Ontario forced the City of Toronto and several surrounding communities to merge into the new 'mega-city' of Toronto1.

Toronto is often called a city of neighbourhoods. Residents tend to identify themselves both as Torontonians and as residents of a particular neighbourhood or former borough. Most neighbourhoods feature a mix of commercial and residential use, and often industry as well.

Some neighbourhoods bear old names, such as the relatively affluent neighbourhoods of Rosedale (old money) and Yorkville (which was a hippie area in the 1960s) and the gentrified neighbourhood of Cabbagetown, where Irish immigrants once grew cabbages in their yards. Others are geographic, such as Queen West and Bloor West Village. Some reflect particular ethnic communities, such as Chinatown (which is really pan-Asian), Little Italy (of which there are two), Greektown, and Little India, and a thriving Tibetan exile community. Some reflect other communities, such as Boystown (which isn't boys-only). Then there are those that are identified by particular features, such as Kensington Market, which has been home to waves of new immigrants for over a century, and to Bohemians since the 1970s.

The Toronto Islands have their own airport which offers convenient access to the city for light aircraft. Most foreign visitors to Toronto, however, will arrive at Pearson International Airport, to the northwest of the city. To date there is no direct rail link to the city centre, but buses and taxis are plentiful.

Travel in the city is fast, reliable, and safe. The Toronto Transit Commission (TTC) runs a combination of subway trains, servicing most areas of the city, and busses, servicing the rest. Fares and reasonably priced and routes are easier to decipher than those of many large cities.

Access to Toronto by car is provided by a fairly good network of highways, which is on the verge of being overwhelmed by the megacity's growth.

These figures are taken from Statistics Canada data:

1For more of Toronto's history, consult The Canadian Encyclopedia (Toronto: McClelland and Stewart, 2000).