The British Parliamentary System Content from the guide to life, the universe and everything 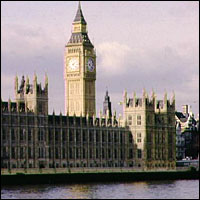 The British Parliament has been in existence since 1215, when King John signed the Magna Carta, and is one of the oldest in the world. The workings of it have changed through the ages and below is a brief description of the ways in which it works.

Parliament consists of two chambers, the House of Commons, consisting of members of parliament who are elected, and the House of Lords, consisting of unelected peers. The Sovereign, at the moment Queen Elizabeth II, is the third part of the Parliament. The government is officially known as Her Majesty's Government. The Queen has, in principle, a lot of power over the government, but chooses not to exercise that power. This position has emerged through the ages, though at one time the Sovereign exercised a lot of power over the government, and the country.

The Make Up of the House of Commons

The House of Commons consists of Members of Parliament, who are elected. The United Kingdom1is split into constituencies, and each constituency votes for an MP (Member of Parliament) to represent them, using the 'first past the post' system.

At least every five years there is a general election, when the MPs are elected. The Prime Minister decides on the timing of the election, and can call an election at any time, but one must be called within five years of the one before. It is usual for an election to be called after four years. A motion of no confidence can be brought against a government, which, if successful, will result in an early general election. They are rare however, and are likely to bolster support for the government if it fights off such a challenge.

There is potential for a by-election where one constituency has to elect a new MP. This happens if the MP cannot serve as MP, such as if they die, resign2, or become a member of the House of Lords3. This allows a new MP to be elected.

It is usually necessary for a government to have the majority of the MPs in the country. If no party has an overall majority, the party with the most MPs has the first chance to form a coalition. In a coalition government, the government consists of two parties rather than one, and there will need to be some compromise on issues where the parties disagree, although the coalition will almost certainly be between parties with similar views. It is usually advantageous to both parties, who have more power together than they would otherwise.

The Cabinet are the main people who run the country, with the Prime Minister in charge, and other ministers having their own department or ministry. They are each responsible for some area of public policy such as education, health and transport. A minister has some freedom in the decisions (s)he can make, but in some cases legislation is needed, which requires the support of both houses of Parliament (see 'The Passing of Laws' below)

Most parties give their leader, and other important party members, a safe seat4 to represent. It would be a political embarrassment if the party leader, or high-profile members of a party ,were to be elected out of office. In the case of a cabinet minister, they could not serve as minister until, and unless, they are re-elected. It is possible for a member of a political party to stand for election in any constituency, but they could be expelled from a party for standing against one of their fellow party members, and this is not usually in the interests of either, as they could split the vote, and allow another party in.

The Make Up of the House of Lords

The House of Lords consists of both hereditary peers, who have inherited their peerage and their title, and life peers, who are appointed by the government, and stay in their positions for life. A large majority of the peers are life peers. Also, important members of the clergy form part of the House of Lords, as do senior judges, or law lords, and other office holders, who have specific roles in the House. Only the office holders, such as the Leader of the House, are paid, the rest can only claim expenses.

Members of the House of Lords cannot become MPs, or hold certain other elected posts. However, lords are allowed to disclaim their title and when standing to become MP, for example, and reclaim the title later. The rule is, however, that no-one can be a member of both houses at the same time.

Peers may have some loyalty to some political party, but there is less of a compulsion to follow the wishes of any party, than for MPs. They cannot be expelled from the House of Lords by being voted out, so have less need for the support of a party, although peers may feel some loyalty to one party.

At the time of writing, the government is reforming the House of Lords, and has appointed so called people's peers, who are not chosen for their affiliation to any political party, but are, in theory, appointed on merit, by an independent committee. This has not met with much success, as the people chosen were not ordinary members of the public. It may be that the House of Lords becomes fully elected, but it is unlikely to be the priority for any government, and slow progress is likely on this issue.

The Passing of Laws

In the House of Commons

Almost all laws that are made are proposed by the Cabinet. The Cabinet, through a relevant minister, proposes laws to the House of Commons, and then there is a debate on the issues. The bills5, go through a number of stages in the House of Commons. First, the bill is announced in brief. This is called the first reading. Within a fortnight, the principles and some of the detail of the bill are announced, and they are debated. This is the second reading. Here, there is a vote, and if the bill is not supported, then it cannot proceed further. Assuming a vote is successful, then it is passed on to the committee stage.

In the House of Lords

The House of Lords will then debate the issues, following similar stages to those the bill must pass through in the House of Commons, although it is not usual for committees to be discuss bills, rather it is more likely for the whole house to act as a committee. After this stage, both houses must agree on the final form of the bill, so if the bill has been amended, the assent of the House of Commons is needed for the amended bill.

If both houses accept the bill then it, possibly having been amended, will go to the Queen to sign it. The Sovereign is unlikely to decline this, and the last time the Royal Assent, as this is known, was refused was in 1707. At one time, the Sovereign would have used his/her power a lot more, but more recently the Sovereign has deferred to parliament.

Mostly government bills are passed as stated, with few changes as the government will almost always have a majority, so can usually force through bills, if the government's MPs vote with the government. The greater the majority, the easier this is. Most parties have individuals in them called Whips who have a role of keeping their party's members informed of parliamentary business, and also try to make sure that the MPs vote in favour of their party. In a coalition government the situation is different, as the two parties may disagree on many issues.

Raising Bills in the House of Lords

Some bills are debated solely in the House of Lords. These tends to be noncontroversial bills, where the main problems are to do with the detail, rather than the principle. These bills must still be presented to the House of Commons, who must vote in favour of it, for it to become law. Also bills relating to the introduction of new charges, such as taxes, must be raised by a government minister in the House of Commons.

Overruling the House of Lords

Any MP can propose a bill, called a private members bill. These are unlikely to be made law, but can be. They tend to be proposed where the government does not want to raise it, and they generally do not have government backing, so are rarely made law, and may not even be fully debated. The process is sometimes used to highlight the need for government action rather than to make law.

The Early Day Motion system can be a way of highlighting the need for action. They take the form of a request 'That... ' followed by the subject of the motion. While they may not be debated, they are distributed to MPs so can become widely known in the House of Commons. Some Early Day Motions are comments on certain groups, actions, or events, while some seek to encourage certain actions by the House of Commons.

The motions can be endorsed by other MPs, by signing them, and amendments can be made, by the MPs, and the amended motion may be signed. This system can give an indicator of the views of the MPs, and is also used to raise issues when there is little or no time to debate them. They, in themselves, may not become law, although they can, but can be a way of drawing attention to the need for law to be made, or action taken in the case in question.

There is limited time for debate of bills in the House of Commons, so private members bills are presented to the MPs, and some of these are voted for. The successful bills are then given time for debate, and have a chance of becoming law, given support of the MPs. Also, the ten-minute rule allows for a short speech in favour of a bill, and a short speech against it. This can be an attempt at law, but may be an attempt to highlight an area of concern. The time for this bill is when the House will usually be full, and the press are likely to be present, and the MP in question is likely to be able to get a lot of publicity, even if the bill does not make law.

At the moment, the Welsh Assembly, Scottish Parliament, and the Northern Ireland Assembly, allow these countries to have more control over certain issues in their countries. Wales and Scotland, and Northern Ireland still have MPs in the British parliament. This is a source of controversy, as Scottish, Welsh and Northern Irish MPs can vote in issues that only affect England, but not the other way round6.

The British Parliament is currently changing in a number of ways. However, this entry is meant to give a guide to the system at the current moment. For other information about the Parliament, and the devolved governments, the following Links might be useful. They are links to the official websites of the parliaments.

1This consists of England, Wales, Scotland, Northern Ireland.2No MP can resign, but can become a member of the Chiltern Hundreds, which is about the same thing.3An MP cannot also be a member of the House of Lords.4A constituency where the party have little chance of losing.5A bill is a proposal for a law to be introduced. This includes also the introduction of taxes, or other charges.6This issue is known as the West Lothian question.