Whitby, North Yorkshire, UK Content from the guide to life, the universe and everything 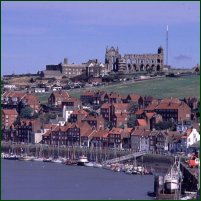 Back in 657 a Northumbrian1 princess called Hild (better known as Saint Hilda) decided that the top of the eastern cliff at the mouth of the River Esk would be a great place for monks and nuns to live. It must have been a fairly popular abbey, because more and more buildings appeared and there is now a sizeable town below the abbey's ruins (which are mostly 13th and 14th Century; the buildings were rebuilt several times).

Near the abbey stands not-ruined Saint Mary's Church, built at the beginning of the 12th Century and added to since. The church's interior has remained largely unchanged and the best pews still have doors with family names on them. These days, the families don't tend to enforce their claims very rigorously.

A flight of stone steps leads up from the town to the church and abbey. Any of the locals will tell you that there are 199 steps2, having counted them several times in their youth. There's a low step at the bottom; this is included in the count. You may hear kids shouting '804, 805, 806,...', but they either can't count, are trying to confuse people, or have cruel parents who make them go up and down several times.

The town grew up onto the West Cliff as a holiday resort in Victorian times, so if you find a hotel to stay at it may well be up there. On the other hand, there's a Youth Hostel right near the abbey.

In the valley between the cliffs, Whitby's streets are narrow and winding, some are pedestrianised. If you have a problem with hill starts, you should probably take your driving test elsewhere. On the other hand, if roundabouts are your bugbear, Whitby's a rather good place.

There are plenty of shops to hold your interest3; many sell souvenirs, but others try to carve out niches selling craftwork or books. Numerous pubs provide the opportunity to relax, and maybe have a bite to eat. Food is also available from fish and chip shops4, cafés and the odd ice cream van parked by the harbour5.

Over the years a lot of significant things have happened in and around Whitby. Millions of years ago some animals died. This was well before Whitby was established; in fact the area was underwater. The animals fell to the sea bed and were gradually covered in sediment.

In the 19th Century people became very interested in these animals and found that the coast near Whitby was an excellent place to look for their fossilised remains. Local people had long been finding ammonites on the beaches and in the cliffs, though they didn't know they were ammonites, instead believing them to be, for example, snakes that had been turned to stone by Saint Hilda.

It took larger creatures than ammonites to really impress Victorian fossil-hunters and Whitby obliged by throwing up fossils of ichthyosaurs, plesiosaurs and other examples of Jurassic marine life, not to mention the occasional pterodactyl.

As well as the animals, much vegetation died and fell to the sea bed. Over the many myriad millennia this has turned into jet6, a sort of coal, but harder and shinier than anything that's normally burnt in a fireplace. Although Stone Age man first started digging up jet near Whitby it was in Victorian times that it really caught on after the Queen herself wore it while mourning Prince Albert. These days it is available in many jewellers and gift shops in Whitby.

The Synod of Whitby

In 664, not long after the abbey was founded, a group of very important people met to decide when to celebrate Easter. This Synod of Whitby decided on the Roman Catholic date, rather than the Celtic one, because King Oswy of Northumbria worried that Saint Paul7 might not open the Pearly Gates for those who didn't do as the Romans do.

This decision affected more than just diary manufacturers. Over the following decades Roman Catholicism gradually ousted the Celtic Church to become the dominant British faith, a position it would hold for almost a millennium.

An arch made from a whale's jawbones and standing on the West Cliff gives a clue to which industry thrived in Whitby. It also saw its share of adventuring; it was from here that Captain James Cook set sail on his quest to map the Great Southern Continent of Australia, which turned out not to be quite as big as people thought.

The harbour is well protected by a sort of double pier on each side; in 1914 concrete walls were added to the ends of the original stone structures. Metal structures with wooden boards on them brought the newer piers up to the height of the old ones, and automatic lighthouses replaced the larger original ones. The piers are popular with fishermen and tourists and both can be walked along, though the west pier is more tourist-friendly, having more benches and railings.

Boats sailing a little way up the river pass through a swing bridge. The only other bridge across the Esk in Whitby is further upstream and not very pedestrian-friendly, so on busy days pavements and roads come to a standstill while the boat passes.

Mention must be made of Whitby's most famous visitor, even if he is fictional: Count Dracula made landfall here and ran around in the form of a wolf. This makes the town a popular place of pilgrimage for goths and horror fans, even boasting an annual goth music festival, Whitby Gothic Weekend, and a tourist attraction called The Dracula Experience.

But Drac was just a visitor, and Whitby is also the birthplace of the god of hellfire, Arthur Brown. The number-one single 'Fire' by The Crazy World of Arthur Brown remains Brown's only British chart hit.

Whitby has a railway station, to which trains run from Middlesbrough. Services are infrequent and not that fast, but go through the rather scenic Esk Valley.

Buses run frequently and directly from both Middlesbrough and Scarborough (and less frequently from further afield). The 93 and X56 are the main ones to watch out for.

Travelling by car you can follow the A171 from either Middlesbrough or Scarborough. Those heading up the A64 from York or the A170 from Thirsk can cut across the North York Moors via the A169. This won't be as fast as the A171, but takes you past the gates of the Fylingdales radar station8. There are car parks on the West Cliff and on the East Cliff near the abbey.

1Northumbria is literally 'the land north of the Humber' and was much larger than the present-day county of Northumberland.2Unless they tell you to bog off and stop bothering them with stupid questions.3If shops are the sort of thing that interest you.4The fish is pretty much guaranteed to be fresh, as it hasn't come very far.5To the bemusement of locals, ice cream remains popular all year round.6From which we get the term 'jet black'.7Said to be the first Pope.8This might not be marked on your map, being very hush-hush, at least for a massive great building that can be seen for miles.