Orchids of the British Isles - The Insect Mimics Content from the guide to life, the universe and everything 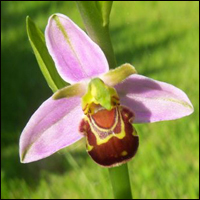 The Bee Orchid Ophrys apifera is one of the more common orchids of the British Isles. It can be found growing on the banks of motorways, on common land, or even suddenly appear on a garden lawn. This orchid, unlike others, is able to adapt quite easily to various habitats, and has popped up on chalk hills, sand dunes and waste ground.

The petals of this orchid have evolved to look like a female bee sitting on a flower. The outer three petals, which are pale lilac or pink, form the 'flower' while the bottom petal is folded back on itself to form the body of a bee. The latter is velvety brown in colour, with yellow bands in the shape of a 'U' from one side of the lip to the other. The last two petals, which are also pale lilac or pink, are curled to form the antennae of the bee.

The flower spike appears from the centre of a rosette of basal leaves and grows up to 50cm, with between two and seven flowers. Unfortunately for the bee orchid, the bee that it mimics never visits the British Isles, so it must rely on self-pollination to reproduce. The bee orchid also grows in areas of Europe where the Eucera bee lives and, happily, pollination proceeds in a more traditional manner.

Bee orchids are classed as monocarpic1, but they can flower for up to eight seasons before finally dying. In that time they can produce millions of seeds, but most of them will never germinate due to the lack of a certain mycorrhizal fungi in the site where the seeds have landed.

There are eight known variations of bee orchid in which the flowers are different, and in fact two of them have no 'bee' at all. It's not uncommon for orchids to cross-pollinate with other orchids in the same genus and produce hybrids; the bee orchid is known to have crossed with the fly orchid and the late spider orchid.

Name aside, there is little similarity between these two orchids. They grow in the same soil type, which is closely-grazed chalk or limestone grassland. Both are also rare and only exist in a few protected areas, but there the similarities end.

The early spider orchid Ophrys sphegodes was recently found in huge numbers, thriving on the soil remains dug from the Channel Tunnel, which was spread below the cliffs of Dover.

The flower of the early spider orchid most represents a spider; the three outer petals are green in colour. The lip of the flower, or the labellum, is bulbous like the body of a spider, brown in colour, with a fuzzy texture and a blue-grey mark in the centre, shaped like an 'H'. There are two small pouches at the top of the lip, which looks like a spider's eyes. The flower spike grows to a maximum of 20cm and produces between two and four blooms. Oddly, the flowers seem to be pollinated by solitary bees rather than spiders! The life-cycle of this orchid is only three years from seed to flowering.

The flower of the Late Spider Orchid Ophrys fuciflora are much taller, and the labellum is almost square and has a velvety texture with yellow markings. It bears no resemblance to a spider. This orchid can produce up to six beautiful flowers on a spike up to 55cm tall. The three outer petals are pink in colour, with green veining, unlike the early spider orchid which produces between two and four on one stem. As its name suggests, the late spider orchid flowers up to two months later than the early spider orchid, which flowers around April, though it is not uncommon for their flowering seasons to overlap. Cross-pollination of the two spider orchids has been recorded in the past.

The Fly Orchid Ophrys insectifera bears a remarkable resemblance to a fly sitting in the middle of a flower. The lip is long and three-lobed, to represent the body and wings of a fly, and is mahogany brown with an iridescent blue stripe across the centre. There are two shiny blobs at the base of the lip that mimic the eyes of a fly. The outer petals are green in colour and sometimes crinkled. The flower spike can reach up to 60cm in height, with up to ten flowers.

This orchid likes to grow in open woodland, especially under the canopy of beech trees. It also grows on the margins of seasonal lakes in Ireland.

The fly orchid and the early spider orchid are the only ones in this genus that emit pheromones to attract insects. These pheromones attract male digger wasps which try to mate with the flower in a process called pseudocopulation. The pollinia2 get stuck to the head of the wasp, which then flies off to another fly orchid, thus pollinating it. Ants also remove parts of the pollinia for food and may act as accidental pollinators.

This orchid has been known to cross-pollinate with the bee orchid and early spider orchid, even though it rarely shares the same habitat.

1A plant that only flowers once then dies.2Sacs formed by the coagulation of pollen.