Orchids of the British Isles - Miscellaneous Content from the guide to life, the universe and everything 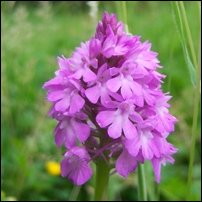 The dense-flowered orchid is also known as the Irish Orchid. It was discovered in Ireland in 1864, where it is now confined to a few sites on the west. There was a small group of these orchids on the Isle of Man, but none have been seen there since 1986.

The leaves are broad and light bluish-green, with two or three sheathing stem leaves. It is a small plant, with a maximum height of 40cm.

The flowers are small and white, with up to 35 flowers on each spike. They are densely packed in a tight spiral around the stem. The upper petals and sepals form a short pointed hood over the lip. The lip itself is divided into three lobes; the two side lobes are pointed, while the central lobe is longer and square at the tip. There is a short spur coming from the back of the flower. Although the flowers have a high nectar content, no insects have been recorded pollinating the flowers.

This orchid likes to grow in sheltered 'limestone pavement1', occasionally on roadside verges and in calcareous sand dunes.

This orchid has three distinct subspecies, which grow in different areas and different habitats.

The leaves of this orchid are long and narrow, with up to five basal leaves and several stem leaves.

There are two colour forms of this subspecies, white and pink. The flowers form a long spike, with up to 200 tightly-packed, individual heads. The upper sepals and petals form a small pointed hood over the lip, while the two side petals are held out like a birds wings at an angle. The lip is three-lobed and slightly recurved at the tip, the central lobe being longer than the others. There is a long nectar-filled spur coming from the back of the flower, which is sweetly scented.

Pollination has been recorded by butterflies and daytime moths, and by several species of bumblebees. This orchid is also home to species of crab spiders, which lie in wait among the flowers waiting for insects to visit.

This species likes to grow on chalky grassland, limestone and downland areas. Populations are restricted due to loss of habitat; ploughing and drainage have been contributory factors. As an experiment, Exmoor ponies have been introduced into some areas to graze coarse grass, which can restrict the growth of this species. It has been successful and resulted in many more flowering plants.

This orchid, also known as fragrant marsh orchid, is the tallest of the three species in this group, growing up to 75cm. It also has far more leaves than the others. The leaves are long and strap-like, forming a clump at the base.

There can be up to 200 dark pink or lilac large flowers densely packed onto each spike. The upper petals and sepals form a hood over the lip. The long and pointed side petals are held horizontally each side of the flower. The flower has a wide lip with three lobes, which are not deeply cut. The spur is shorter than that of its cousins.

Pollination is the same as in conopsea and the flowers are also sweetly-scented.

This orchid likes to grow in fens, meadows at the base of hills where the soil remains damp, and chalk downland. Where it grows with conopsea, it flowers later in the year.

Borealis only grows to 15cm in height, making it the smallest of the subspecies.

There are only one or two basal leaves, with a couple of stem leaves. The flowers are pale lilac to dark pink and form a loose spike, with up to 30 flowers on one stem. The upper petals and sepals form a pointed hood over the lip. The two side petals are ovate and held out either side of the lip. The lip is broad and flat, with three very small, rounded lobes. The central lobe is slightly longer and crimped at the tip. It is also sweetly scented and pollinated by butterflies, bumblebees and daytime moths.

It grows in many different habitats, from heaths and moors to acidic grassland and downland. It can be found in small populations across the British Isles, and is most common in Scotland.

Also known as the white mountain orchid, this can grow up to 40cm and could easily be mistaken for something other than an orchid. It has four wide ovate basal leaves and one or two narrow stem leaves.

The flowers are creamy-white, with up to 100 per stem. Unlike most orchid flowers, they are bell shaped, with a small three lobed lip. The central lobe is longer than the other petals and sepals and is pointed at the end. The outer sepals and petals form the bell shape around the lip. There is a cone-shaped spur coming from the back of the flowers, which are vanilla scented. Pollination is thought to be done by butterflies and daytime moths, but there is no recorded evidence to support this.

This orchid is mostly confined to the northern half of Britain and a few places in Ireland. It likes to grow in mountain pastures, where the soil is well-drained, in a sunny position. It has also been found on moorland, where the heather has been burnt. Here it can appear briefly in small numbers before the heather grows to cover the land again. Overgrazing and loss of habitat, especially in the southern half of England, have lead to a decline in this species, with the last recorded sighting in the south coming from Sussex during the 1930s.

The leaves of this orchid are long and narrow, with five or six stem leaves. It can grow up to 60cm in height, with up to 100 tightly packed flowers.

This orchid is so-called because of the way the flowers open. As the first flower buds open up, the spike is a rough pyramid shape, but as flowers continue to open the spike becomes longer and conical. There are three forms of flower: a deep pink form, which is the most common; a white form, alba which is much rarer; and emarginata which is pale pink and has no lobes on the lip. The upper petals and one sepal form the hood over the lip. The two side sepals stand out beside the lip on either side. The lip has three rounded lobes, (except in emarginata ) with the two outer lobes being wider than the central lobe.

A variety of insects pollinate the orchid, including large skipper butterflies Ochlodes venata, six-spot Burnet moth Zygaena filipendulea , and buff-tailed bumblebees. The two pollinia are joined together and held just inside the flower; when an insect disturbs the pollinia, the pollinia clamps around the proboscis of the insect and is taken to the next flower.

This plant likes to grow in calcareous soil, which is well drained. Dune slacks, chalk downs and golf courses are some of its preferred habitats. It will also inhabit waste ground, roadside verges and cliff tops. On the Isle of Wight it appears in large numbers at Arreton Down, which is a nature reserve and place of scientific interest. It is widely distributed around the British Isles and Ireland, though in Scotland it is confined mostly to the west coast cliff tops.

1 Flat blocks of limestone separated by fissures and deep cuts, known as grykes.