Sundials Content from the guide to life, the universe and everything 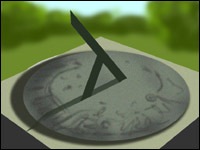 Sundials are devices which tell the time by interpreting the shadow cast as the sun shines upon a fixed dial. They are inaccurate when compared with clocks and watches but are often used as centre pieces for formal gardens. Strangely, sundials seem to be most popular in countries where the sun rarely shines, being hidden behind a cover of dense cloud.

The first two of these problems can be overcome very easily, giving a sundial which is accurate to within about 15 minutes. The third problem can be corrected by a very elaborate type of sundial, the analemmatic sundial, or by including a correction table with the sundial. This is probably too much trouble for most people.

Setting up a Sundial

To set up a sundial, you must:

Once your gnomon is pointing the right direction, you can mark your sundial so that it shows the right time. In many countries, daylight saving time is used in the summer and clocks are set one hour forward. Since the sun shines most in the summer, it makes sense to set up your sundial to show daylight saving time, rather than the local time that most sundials show. Mark the shadow at exactly 12 o'clock by your watch. Now mark out the other hours on either side, so that 6am and 6pm are at 90° to 12 o'clock. Subdivide the hours into 5 minute intervals.

You will find that your sundial is accurate to within a couple of minutes on many days of the year, such as 15 April or 2 September. At other times, it will be wildly inaccurate, such as on 4 November, when it will be nearly 17 minutes fast. To overcome this, it is possible to use a correction chart. Some sundials have a chart engraved on them, but consulting a chart and correcting the time is too much trouble for most people.

It is traditional to put a motto on sundials, often in Latin. These range from twee to grim. Here are a few good ones: