THE STORY SO FAR

Back in May 2019 Bluebottle drew this story about a dinosaur being resurrected on the Isle of Wight and wandering around town. It is now heading to the pier while feeling a tad peckish. 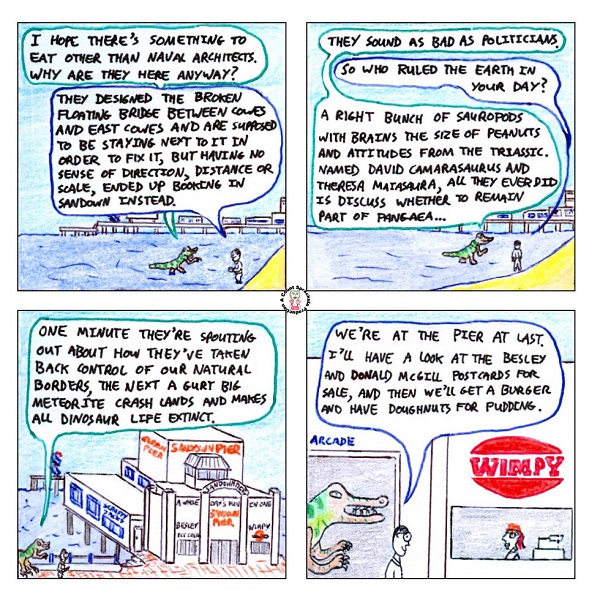 Will everything be destroyed by a volcanic eruption at the end, as is traditional in films involving dinosaurs? will Sandown Pier, as a notable landmark, turn out to secretly be the base of a government organisation aimed at preventing the overthrow of the human race by time traveling dinosaurs, or is this not that sort of story? Will anyone actually read next week's hand-drawn and scruffy edition of What the Dinosaur?

This was drawn back in May/June, following the death of Judith Kerr. At the time Theresa May was still Prime Minister. Both the political dinosaurs mentioned were real - the Camarasaurus was indeed a saurapod from the Jurassic while a Maiasaura (pronounced 'my' rather than 'may', though) was a duck-billed dinosaur from the Cretaceous.

If you like seaside postcards, why not visit the Donald McGill Museum in Ryde? Donald McGill drew 12,000 postcards during his career, while Rupert Besley is the cartoonist for the Isle of Wight County Press and has also drawn several postcards. Please note that in reality the Wimpy on Sandown Pier closed a few years ago, but as the story has a dinosaur millions of years after they were wiped out, what's the difference?