CBeebies Pantos Content from the guide to life, the universe and everything 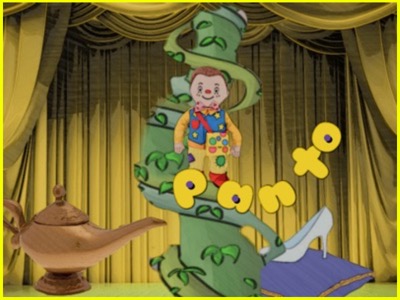 CBeebies is the most-watched children's television channel in Britain. Since its launch in 2002, CBeebies has been the BBC's channel aimed at children aged six and under. As part of the BBC's motto to inform, educate and entertain, the channel seeks to inspire children, aspiring to give them a lifelong love of art and the arts, science, classical music, cooking, gardening and ballet. Unlike other children's channels that broadcast cartoon after cartoon with constant commercials, CBeebies has no adverts and uses presenters both for the channel as a whole as well as many of their programmes. These presenters have become much-loved figures among the nation's parents and children, who often consider them part of the family1.

Since 2009 the channel has annually broadcast a pantomime starring many of these presenters, as the highlight of their Christmas celebration. These pantomimes are regularly the channel's most-watched programmes of the year. Over 200,000 people have applied each year for tickets for the shows, although the cast sadly only give one or two performances each year.

As with all good pantomimes there are songs and dances, men (particularly Justin Fletcher) dress as women and women dress as men, someone ends up with a custard pie in their face and the audience is encouraged to shout such popular phrases as He's behind you! and Oh no it isn't!

The presenters below have appeared in many of the CBeebies pantomimes. These presenters are listed under the names by which children and parents know them.

Alex Winters was a CBeebies presenter between 2009-152 while Cat Sandion has been a presenter on CBeebies since 2013.

The tallest-ever CBeebies presenter3, Andy Day has presented CBeebies since 2007. He has also starred in Andy's Wild Adventures (2012), Andy's Dinosaur Adventures (2014) and Andy's Prehistoric Adventures (2016), the last two both using footage from Walking With Dinosaurs, Dinosaur Planet and Walking with Beasts.

Cerrie Burnell has presented programmes aimed at the youngest children since 2009, much of that time with Alex. Though the fact that she was born with a right arm that ends just below the elbow has attracted excessive focus, children respond well to her expressive face, welcoming eyes and smile. She enjoys writing children's books.

Show Me Show Me Presenters

A BBC children's presenter since 1992, when he was the last presenter on the original CBBC Broom Cupboard, Chris Jarvis was one of the very first presenters on CBeebies in 2002. Since 2009 he has presented Show Me Show Me with Pui.

Pui4 Fan Lee began her children's television career by playing and voicing Po in Teletubbies (1997). In 2002 she became one of CBeebies' first presenters. Since 2009 she has co-presented Show Me Show Me with Chris. She has also written episodes of Old Jack's Boat. Being British of Hong Kong descent, Pui helped launch the channel in Asia.

A band of naughty pirates who star in game show Swashbuckle (2013+), Cook, Line and Captain Sinker, played by Joseph Elliot, Richard David-Caine5 and Ella Kenion respectively, stole Gem's jewels, Gem being played by Gemma Hunt. The only way that Gem can get her jewels back is with the help of children winning various games.

Katy Ashworth has presented I Can Cook, a programme in which young children are encouraged to cook healthy food, since 2009. She also regularly presents CBeebies itself.

Phil Gallagher will forever be called 'Mister Maker', having played Mister Maker since 2007 on art programme Mister Maker, although he has also had a recurring part on Grandpa in my Pocket (2009-15) as Mr Liker Biker.

Played by Katrina Bryan, Nina appears in Nina and the Neurons (2007+), a programme dedicated to encourage children to conduct experiments that enable them to explore the world around them with their senses. Series have been dedicated to such themes as going eco, biology, engineering and sport.

Steven Kynman is better known as Robert the Robot, first appearing on Justin's House (2011+). He has also provided voices for such programmes as Thomas and Friends and Bob the Builder as well as playing Shakespeare in CBeebies' adaptation of A Midsummer Night's Dream (2016). He was also a puppeteer on The Muppets' Treasure Island (1996).

This, CBeebies' first panto, was proposed and written by Chris Jarvis, who explained:

I've adapted and written lots of pantos for theatres and television but rarely for both, so I was delighted to write this one which tells the story of Jack and Jill's doomed journey up the hill – with hilarious consequences. Pantomimes appeal to children from two to 102 because they are funny, tell a good story and involve the audience in the most unique way. I don't think the children of today are any more or less sophisticated than yesterday and still laugh at the same jokes, routines and catchphrases that have been developed for decades. If anything, our appetite for panto has increased, and, year on year, more people are going to see them.

Although simple when compared to CBeebies' later pantomimes, this was where it all began. Sadly it has not been broadcast since 2011.

After the first pantomime proved successful, a second was commissioned on a grander scale. This would feature three CBeebies people who would not return. Nisha Anil presented Same Smile (2010), a programme that showed how though people have different hobbies, interests and beliefs, we all smile the same. Alpaca puppets Nuzzle & Scratch, played by Neil Sterenberg and Dave Chapman, had appeared in Nuzzle & Scratch and Hoof and Safety in 2008-10.

This panto perhaps has the largest cast of CBeebies characters. The Narrator was Bernard Cribbins, singer and actor famous for The Railway Children (1970), The Wombles (1973-75) and Jackanory8 (1965-96). He also starred in the Doctor Who series during 2007-10, having previously appeared in the 1966 Doctor Who film Daleks – Invasion Earth 2150 AD. He was about to appear on CBeebies as Old Jack in Old Jack's Boat (2013) and his character's dog, Salty, took part as well. Dr Ranj Singh also appears; a real doctor, he frequently appears on television discussing medical matters and had a show on CBeebies entitled Get Well Soon (2012).

Sophie Aldred voiced the CGI character Tree Fu Tom. She is most famous for playing Ace in Doctor Who in 1987-89. Tree Fu Tom (2012-16) was developed with the Dyspraxia Foundation with the aim of promoting exercise in general and more specifically movement in children with developmental co-ordination disorder. Children are encouraged to wave their hands and legs and jump up and down, repeating movements based on those used by occupational therapists to help child development.

Andy plays the giant, performing on large stilts throughout.

One of the best Christmas pantos. One particularly moving scene for the parents in the audience is the party that takes place in Scrooge's past, as this contains many presenters and actors who appeared on BBC children's programme Play School when they were young. Derek Griffiths, who plays the Ghost of Christmas Past, was in Play School (1971-81) and Play Away (1971), and was the voice of Super Ted (1983-89). Dave Benson Phillips had hosted Playbus, Playdays (1988-97) and Get Your Own Back (1991-2004). Another Play School host, Iain Lauchlan, had appeared in Fingerbobs (1972) and spin-off Fingermouse (1975), with Fingermouse accompanying him. Baroness Floella Benjamin, along with Play School's Humpty, were the guests of honour. Benjamin has continued to do voice work for various programmes including Mama Mirabelle's Home Movies (2007) and Chuggington (2010-14), and played regular character Professor Rivers in The Sarah Jane Adventures (2007-11).

Like most modern adaptations this excludes Tiger Lily and the Indians, but nevertheless is an enjoyable version of the classic.

A highly effective panto that cleverly used giant screens built into the set to give the appearance that Alice was changing size. Though the story had also been heavily tweaked to emphasise the importance of using an imagination, this perhaps gave the story a sense of overall meaning missing from the episodic novel.

This is the story that strays furthest from the traditional panto formula. Despite the background music it is not a ballet, although the dancer playing Queen Rat is very graceful in her wheelchair. CBeebies usually adapts a ballet around Easter. Despite this it remains popular and is easily able to capture the attention of young viewers.

The 2017 show included several newcomers to CBeebies pantos. William Vanderpuye is a famous voice artist whose roles include the voice of Zoomer in Rastamouse. Captain Captain is a character in Swashbuckle played by Jennie Dale, replacing Captain Sinker as the leader of the pirates. Dr Ranj Singh is a real, practicing paediatrician who not only presents children's show Get Well Soon in which he cures puppets, but also appears on news and current affairs programmes discussing serious health and medicinal topics. Maddie Moate presents CBeebies programme Do You Know?, for which she won a BAFTA.

Due to the overwhelming demand for theatre tickets, Thumbelina enjoyed a cinematic release before being broadcast on CBeebies. Ben Cajee had joined CBeebies in 2015 and makes a belated debut panto appearance while Evie Pickerill became a CBeebies presenter earlier in 2018. Aimee Campbell presents Magic Hands, a CBeebies BSL9 poetry programme.

Once again the CBeebies panto enjoyed a cinematic release before being broadcast on CBeebies. Joshua Haynes appears in his first CBeebies Panto and has played Mack in CBeebies show Molly and Mack. Waffle the Wonder Dog becomes the second dog to appear in a CBeebies panto and is the titular character in his own television series in which he plays a talking dog.

Due to the lockdown restrictions because of Covid-19 a live performance was impossible, and so this is an in-house. One of the weaker entries, but considering the restrictions it was positive to see the tradition continue. Nigel Clarke is the presenter of The Baby Club while Yolanda Brown is an internationally successful saxophonist who presents YolanDa's Band Jam. Taiya Samual and Cathy Tyson voice characters in cartoon JoJo & Gran Gran.