The Word 'Well' Content from the guide to life, the universe and everything 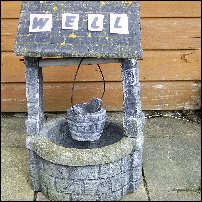 One of the most versatile words the English language has is the word 'well'.

There are no less than another 20 entries in Collins Dictionary concerning the word 'well'. The word has so many meanings, many of which contradict each other, that in the terminology of Douglas Adams, it could be described as being the verbal equivalent of a recipriversexcluson - number whose existence can only be defined as being anything other than itself, according to the book, Life, the Universe, and Everything. 'Well' is used very often and in very different situations. In order to understand or even to get an inkling of what a speaker intends by saying 'well...', it might be useful to know some of the more popular meanings of the word.

The Good, the Bad, and the Great Confusion

'Well' as the Adverb of 'Good'

The adverb of 'good' is not 'goodly', but instead 'well'. So when you hear that Bruce Springsteen performed well last night, it means that he put on a good performance.

Unfortunately, 'well' can take a meaning quite opposite to the one above. If you ask people who regularly attend the concerts of Bruce Springsteen how they liked the Britney Spears concert last night, they will likely answer, 'Well...' What they are really saying is, 'It was so awful. These were the worst 60 minutes of my whole life and the only good thing about the concert was that it ended. The 'music' was too loud and the fans were too young.'

'Well' in the Meaning of 'Yes'

Quite often, the word 'well' is used when the speaker really means to say 'yes', as commemorated in the scene of a boy or girl attending the house of a girl or boy (depending on sexual preference, etc) after a nice evening, when whoever is being attended asks his or her partner to join him or her upstairs and gets, 'Well...' as an answer. In that situation, 'well' may mean 'yes' as in, 'Funny that you should mention this, but me being what I am, and you being what you are, and seeing that we had a rather nice evening together, and it being a wonderful night tonight, and I was just now wondering if we might not drink a last cup of coffee together, and why not in your apartment? Yes, as a matter of fact, I would like to come along with you.'

Unfortunately, 'well' can also mean 'no', and the very same scene of the above paragraph can serve to explain. Now it is the one who kindly attended the other home who lets, by very subtle innuendoes, the other know that he or she would not really mind if the other asked him or her upstairs and gets, 'Well...' as an answer. But now it is 'Well...' as in, 'You know, I would really love to talk with you a while longer, but tomorrow will be a very hard day for me, and I have to get up real early, and then there is this report I have to give on the importance of pet iguanas. I still have to do some research for that, and I'm also having my apartment remodelled and the headache I didn't tell you about is getting real bad, so it's really nothing to do with you, but I have to go now. Oh, and by the way, don't bother calling the next few years because I have to spend more time on the Internet so the line will be busy.'

'Well' as the Formula to Describe the World

'Well' is probably the only word in existence that is capable of completely reflecting the entire world and everything in it. In the situation of two friends meeting for the first time after 20 years of separation, it is enough if one of them says, 'Well...' and the other replies, 'Well...' Everything that is necessary is thus said and a proper basis for the future is established. The past 20 years evaporate into oblivion and all the memories of the past come back to life. If none of this happens, the friends need not pretend to understand each other and should get on with their own lives, without each other.

'Well' as a Means to Say Nothing at All

Very often, people use the word 'well' to avoid saying anything. In such cases, 'well' is quite frequently accompanied by phrases like 'you know', 'it's like', 'kinda', or numerous variations thereof. Saying words like these is a sophisticated way of letting people know that you are a bright, intelligent and eloquent person who knows what sort of things he or she is trying to say. It's kinda like, you know, well, almost like... like... but not really, though. It's more of a, how shall I put it, it's like when - what was his name - and the other one, and, well, eh, right.

'Well' As a Hole in the Ground

To make things even more complicated, a well is something totally different from all the 'wells' we have discussed so far. A well is a hole in the ground which will, eventually, be filled with water from the surrounding ground. Wells can be found all over the world. They are especially important in areas where there are no rivers or lakes that people can get their drinking water out of. Such wells are also a great means for smart alecks to make fun of people who use 'well' as described in the above paragraph. When such a person says, 'Well...', the smart aleck will jump in and say, 'That's a pretty deep subject for such a shallow mind'.

Coming from a Doctor

Often, medical staff, when asked, will describe a patient who isn't in a bad state as 'doing as well as can be expected' if he or she is your relative. The irony comes in that someone who is doing well wouldn't be in the hospital.

A popular type of greeting card is one called 'get well soon' for a friend or relative who is sick or being hospitalised. This 'well' is the opposite of the one that the people at the hospital use, because it refers to a state of actual full wellness.

To sum up, the word 'well' can be used any time, in any context, by anyone, and with any meaning you want it to have. In fact, most conversations could be held using just this single word. Saying, 'Well...' is a great way of making contact with people. Because of its weird nature, saying, 'Well..' is also a great way of avoiding the necessity to talk to the people you just met by saying it.