Jackanory Content from the guide to life, the universe and everything 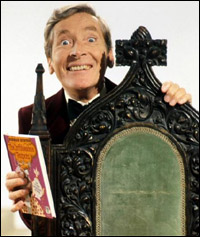 Jackanory1 was a television programme aimed at children which was aired by the BBC between 1965 and 1996 in the afternoon children's television slot. The aim of the show was simple: encourage literacy in children. The method was equally simple: sit the audience down and have someone read them a story. The brief for the show's format can also be summed up in a few words - split a good story into five 14-minute episodes and have that story read by the best storytellers available.

The roll call of 'the best storytellers available' would eventually expand to take in a very large number of famous names. During the run of the programme, a massive 25 years and 3,500 episodes, 400 presenters read 650 stories. The cast list included:

Prince Charles had the honour of reading his own work, The Old Man of Lochnagar, while others became linked with particular authors and story types. Willie Rushton, for example, read the various Winnie the Pooh stories and was also on call for the nursery rhyme compendium. Several others made a number of return appearances, but the two most popular were

During its run, Jackanory presenters read stories and legends from a staggering 44 countries. The show covered some classic works, including The Hobbit, Alice in Wonderland, the tales of Beatrix Potter and the works of Roald Dahl. Despite the obvious quality of the stories, the producers realised that even a very famous narrator can be dull to watch for some children, so illustrations were commissioned. Artists like Quentin Blake, Gareth Floyd and Barry Wilkinson would provide images to stimulate the imagination of the viewer. Blake was also responsible for a 'live' creation - The Adventures of Lester - which he illustrated as the story was told. Jackanory would not limit itself to drawings and paintings either; film clips were occasionally used to liven up the proceedings. The studio set would change from week to week, sometimes spare and empty and at others themed to fit the story being told.

As well as covering established children's favourites, Jackanory also commissioned new work specifically for the series. John Grant's Little Nose (stories about a caveboy and his pet mammoth Two Eyes) and John Aitken's Mortimer (a Poe-esque raven) were both created for the programme.

The changing presenters and stories kept the format fresh and interesting, with each celebrity bringing their own style to the material they were given, and the 14-minute format fit neatly inside a child's attention span. One constant stylistic element was designed to keep the viewer coming back - each day's reading would end with a cliffhanger of some kind, with the presenter saying '...I'll tell you tomorrow! Bye bye!', or variations thereof. However, all good things must come to an end and after 25 years the show concluded with Alan Bennett's reading of The House At Pooh Corner. Perhaps the programme could no longer compete with the increasingly sophisticated desires of its target audience - how does a celebrity reading a book compete with a games console or the Internet? Perhaps it was simply time to close the book and move on. Whatever the reason, a stalwart and much loved part of BBC children's television programming was gone.

... but possibly not for good. In February 2003, Channel 5 announced that it was looking into recreating Jackanory for a new generation of children. The show was to be given a revamp, with a new generation of presenters more accessible to the modern audience. However, to date there has been no further news and Jackanory waits, sitting on a shelf somewhere, to be given a new lease of life.

1The word itself is a slang term, probably Cockney rhyming slang, for 'story'. It has grown to also mean any kind of glib excuse.2Dame Judi had the dubious honour of reading in a studio full of dogs and her attempts to say 'shouting through the letter box' in a Norfolk accent (which made the first word obscene, and a little impractical), has become a standard feature of celebrity blooper shows.3Linking to another BBC favourite, being Doctor Who was a good way to get asked to do Jackanory. Patrick Troughton, Jon Pertwee, Peter Davison, Sylvester McCoy and Paul McGann have also made appearances on the show. Tom later became the host of a similar show for ITV, The Book Tower.4Kenneth Williams was initially not interested in appearing on the programme at all. He had heard he might have to wear 'a special Jackanory hat' and felt this was demeaning.