Spike Milligan - Comedian Content from the guide to life, the universe and everything 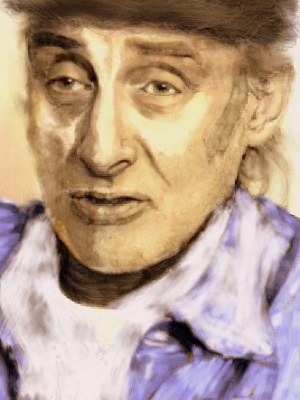 He was one of the funniest men in the world. He was also probably its most famous manic-depressive. Apart from appearing in many hilariously funny TV shows, Terence Alan Milligan1 also found time to write most of the inspirationally surreal radio comedy, The Goon Show, one of the best children's books ever written - Badjelly the Witch - and a biography of his war exploits - Adolf Hitler, My Part In His Downfall which will outlive many heavier, more 'worthy' tomes on World War II2.

With his brilliance came problems. There were several breakdowns and his behaviour sometimes went over the top, at Harrods3 one day, he tried to stuff 12kg of spaghetti down the food hall manager's mouth so he would know how geese felt when they were force-fed maize to produce pâté de foie gras.

Last of the Goons

The last surviving member of The Goons - he once told fellow Goon Harry Secombe 'I hope you go before me because I don't want you singing at my funeral' - some of his scripts for the show were described as 'the Marx Brothers on radio'. But he left them behind years ago. As he said on his 75th birthday:

When I look back, the fondest memory is not really of the Goons, it's of a girl called Julia with enormous breasts.

On a more sombre note, he told the Sunday Star-Times in 1995:

Much of his whimsy had a point. When he was made an honorary CBE in 1992, he remarked:

I can't see the sense in it, really. It makes me a Commander of the British Empire. They might as well make me a commander of Milton Keynes - at least that exists.

The son of an Irish sergeant-major4 in the Royal Artillery - 'My father had a profound influence on me, he was a lunatic' - Milligan also served with that regiment during World War II.

Origins of the Goon Show

A trumpet player, Spike took part in many wartime shows and met Harry Secombe along the way. Back in Civvy Street5, Milligan and Secombe - by now a comic at the 'tits and bums' Windmill Theatre - met up and combined with Peter Sellers and Michael Bentine to 'pitch' a comedy show to the BBC. The corporation tried it out in May, 1951, and called it Those Crazy People but with Bentine and Milligan on the same programme, it was one crazy person too many and the show lasted briefly before Bentine went. It then became The Goon Show and Milligan was on his way. He co-wrote every show and claimed that it was responsible for the first of his breakdowns.

Of his long-running feud with the BBC, Milligan said:

They wanted jokes. We didn't have jokes, we had semi-lunacy.

Life After The Goons

At Milligan's insistence, The Goon Show ran down its final curtain in 1960 and he did some stage work, a few films and a lot of TV shows, most notably The World of Beachcomber and Q5, which has been called the precursor to Monty Python. He also made many appearances on talk shows and was often hilariously ill-prepared, which could make for some exciting or boring television depending on his mood swings.

A fast writer - Private Eye magazine once ran a cartoon showing a book store window sign reading 'Spike Milligan will be here to write his latest book at 3pm' - he was also prolific, meaning he produced dross along with the gems. But many war veterans reckon that his irreverent memoirs of 1939-45 sum up the madness, the boredom and the occasional hilarity of the times better than anything written before or since.

One researcher who was lucky enough to meet Spike Milligan after he had published Treasure Island According To Spike Milligan, the last in his series of spoofs of classic literature.

I met Spike Milligan shortly before he died. He was on his last book signing tour, and being practically deaf, didn't hear me say my real name was 'Matthew' and dedicated the book to Michael, and then was told by his assistant that he'd got my name wrong and wrote 'Matthew', crossed out 'Michael' and wrote 7/10 - See Me in red pen. Brilliant.

Spike was also an inspired and observant poet as the following little ditty proves:

There are holes in the sky where the rain gets in
But they're ever so small
That's why rain is thin.

He did, of course, become tired of comedy. He said of American comedy that it was 'as funny as a baby with cancer' and he had no time for British comedians such as Rik Mayall.

Rik Mayall is putrid. Absolutely vile. He thinks nose-picking is funny and farting and all that. He is the a***hole of British comedy.

Milligan, despite his often outrageous and sometimes boorish behaviour was anything but. He was, as another comedian Eddie Izzard put it 'the godfather of alternative comedy'.

The man who performed his own send-up of the BBC doing his obituary, died at Rye, Sussex, on 23 February, 2002. He was 83. He did not believe in heaven or hell. 'When you snuff, you just go' he said.

1He adopted the name Spike after hearing American comedy band Spike Jones and His City Slickers on the radio.2This book was the first of a loosely-linked series of seven.3High-class London department store.4Spike was born in Poona, India in 1918, though, after he was refused a British passport, he later changed his nationality to Irish.5A term to describe when soldiers leave the army and return to 'civilian' clothes.