The Ultimate Aardman Animated Film Guide: 2000-2014 Content from the guide to life, the universe and everything 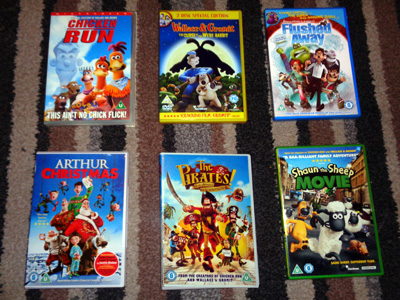 Founded in 1972, Aardman is Britain's most successful and possibly best-loved animation studio. Founders Peter Lord and David Sproxton created a 2D cel-animated character named Aardman, who gave them the name of their studio and can be seen in their logo. Their first break came when were commissioned to make a clay animation short entitled 'Gleebies' in 1975 for the BBC's Vision On series, co-hosted by Tony Hart. Sadly Vision On ended soon after, but in 1976 the experience Aardman had gained led to them creating their first successful Claymation character, Morph. He was first seen in children's art shows starring Tony Hart, such as Take Hart (1977-1983) and Hartbeat (1984-1993). Thirty years later the company is making outstanding feature films and dominating the field of stop-motion animation, plus they have also ventured into computer animation.

In 1985 Nick Park was employed at the studio. He had begun animating a short film entitled A Grand Day Out in 1982 as a graduation project for the National Film and Television School. This film was the first to feature Wallace the inventor and his dog Gromit. Although this was unfinished it impressed Lord and Sproxton enough to hire Park and they allowed him to finish it.

In the mid-1980s Aardman provided the exceptional animation for music videos including Peter Gabriel's 1986 hit 'Sledgehammer' and Nina Simone's 1987 surprise hit 'My Baby Just Cares for Me'1.

In 1989 Channel 4 approached Aardman to make a series of five short films entitled Lip Synch, with Nick Park creating one entitled Creature Comforts. In this, residents of an old people's home and small housing estate's casual comments were set to animations of various zoo animals2. This won Nick Park the Best Animated Short Film Oscar in 1990, narrowly beating his completed A Grand Day Out, the first film featuring Wallace and Gromit.

In 1991 a short film entitled Adam was nominated for an Academy Award. Then in the early 1990s the BBC commissioned two more short Wallace and Gromit stories - The Wrong Trousers (1993) and A Close Shave (1995). Both of these won Academy Awards and the second one introduced the character of Shaun the Sheep. The late 1990s also saw them make a series featuring the adventures of Rex the Runt.

Having consolidated their position at the forefront of British animation, the next logical step was to move into full-length feature films.

In 1999, Aardman signed a five-film picture deal with DreamWorks SKG. DreamWorks wished to challenge Disney's dominance of the animated film market and, having their own cel-animation and computer animation departments, were keen to release stop-motion animated films also as this would mean they made films in every animation discipline3. In fact, only three of the proposed five films in the deal would be made.

In 1996 Chicken Run began as a film that was funded by Pathé in the scripting stage, before the eagerly anticipated film was sought after by Hollywood studios desperate to challenge Disney's domination of the animated film market. After tough negotiations, DreamWorks beat 20th Century Fox and Warner Brothers for the right to finance the film, with the final agreement that Pathé would distribute the film in Europe while DreamWorks handled distribution across the rest of the world. This was the first animated film that DreamWorks, a studio founded in 1994, was involved in making, although due to the length of time required to make a stop-motion film it was fourth to be released.

Filmed in a similar style to old prisoner of war films, it contains references to The Great Escape (1963) and Stalag 17 (1953). It was partly inspired by the true story of the glider secretly built by British prisoners of war in Colditz Castle.

Aardman's second film was originally due to be an adaptation of the old story, Tortoise Vs Hare. Despite spending 18 months developing the idea, it was felt that the script was not ready and the project was indefinitely postponed. Instead, a feature-length Wallace and Gromit story was put in production.

Wallace and Gromit: The Curse of the Were-Rabbit won the 2006 Best Animated Film Oscar, despite facing tough competition, including from Tim Burton's Corpse Bride. This is only the second time a non-American animation has won this award5 and is the only stop-motion animation film to have won. At present it is the second-highest grossing stop-motion animated film of all time.

It took 250 technicians working for five years to make the film, filming an average of five seconds of footage per day. DreamWorks felt that the film was too British for an American audience, and suggested making changes. For example, mentions to Gromit's marrow were changed to 'melon' in the version released in America as DreamWorks felt that Americans would not know what a marrow was. This led to creative differences and a strained working relationship between Aardman and DreamWorks - a problem that was exacerbated while their third co-production was being made.

Flushed Away was Aardman's first computer animated film, a decision made largely because of the difficulties involved in using water in a stop-motion film. Despite being CGI, all the characters retain a strong Aardman appearance. The long development process and the use of CGI meant that Flushed Away is the most expensive Aardman film to date; however, perhaps because of its strong British focus, it was only a minor success.

Relations between DreamWorks and Aardman really went sour during the making of Flushed Away. In 2000 Aardman had wanted to make a film about pirate rats, but DreamWorks proclaimed that any film featuring pirates would flop and insisted that the plot be set in the present day - only for Disney's Pirates of the Caribbean to become a major film franchise in the meantime. So the plot of the film that became Flushed Away was radically changed. Despite this, DreamWorks Animation6 felt that the revised plot was too British. After that, it was agreed by mutual consent that DreamWorks Animation would not continue co-producing films with Aardman.

Around this time, Aardman had been working on developing another film with DreamWorks Animation. Although the original idea had been to adapt Roald Dahl's The Twits, this idea transformed into an idea by John Cleese for a film about cavemen to be called Crood Awakening. After the two companies went their separate ways, the rights to Crood Awakening were kept with DreamWorks Animation, who later released The Croods in 2013.

After Flushed Away, Aardman again concentrated on making outstanding short animations. In 2007 Aardman released the television series Shaun the Sheep, a highly successful spin off featuring the sheep from A Close Shave. The same year, the BBC commissioned another Wallace and Gromit short film, which had a working title of Trouble At T'Mill. This was released in 2008 as A Matter of Loaf and Death.

While A Matter of Loaf and Death was in production, Aardman signed a six-year film deal with Sony Animation. This deal led to two films, Arthur Christmas, their first 3D computer-animated film, and The Pirates! In an Adventure with Scientists, a 3D stop-motion film.

The first Aardman film made as a co-production with Sony Pictures. Despite having a broadly similar story to Fred Claus (2007), it proved far more popular and was successful at the box office. This was the fifth film released by Sony Pictures Animation7 and their sixth film was Aardman's fifth film.

Loosely based on the book of the same name by Gideon Defoe, in America the film was released as The Pirates! Band of Misfits. This was because Sony felt that the American audience associates scientists with negative connotations, especially in the South. Some of the voice artists in the American version were different also. The film's trailer was criticised by Lepra Health in Action for promoting derogatory stereotypes of leprosy, although the scene in which the pirates board a leper ship was changed in the finished film to a scene in which the pirates board a plague ship.

This is the fourth-highest-grossing stop-motion animated film of all time. It had initially been assumed that it would be a CGI film, because of the difficulties involved in animating water and the damage that water can cause to stop-motion models. However when the characters and sets were designed as models, the decision was made to make it a stop-motion film, using computer animation only occasionally and principally for the sea.

Aardman had hoped to make a sequel but the film underperformed at the key American box office so this idea was abandoned. Although Aardman films do very well in Britain, Europe and Japan, they traditionally have struggled in the United States.

Shaun the Sheep is a big-screen adaptation of the popular television series spin-off featuring the character first seen in A Close Shave. As Aardman's Shaun the Sheep television series had been broadcast in 170 countries worldwide and had been voted Britain's favourite BBC children's character of all time in 2014, a film version seemed perfect. The film was financed in a one-off deal by French company StudioCanal, a company that had begun as a cable television channel then acquired a vast media library and made numerous French language films so was keen to expand into the potentially more lucrative English-language market, hoping to build on the success of Paddington (2014).

Shaun the Sheep was released to coincide with the start of the Chinese New Year's Year of the Sheep. Released in over 70 countries, it did well at the box office and its success has led to talks of a sequel.

1A song written in the 1930s that she originally recorded in 1958, it shot up the UK charts following the use in a perfume advert.2A series of Creature Comforts inspired adverts for the Electricity Board's Heat Electric campaign proved surprisingly popular in 1990.3DreamWorks would abandon cel-animation in 2003 after the box office failure of Sinbad: Legend of the Seven Seas.4A Rhode Island Red rooster.5After Spirited Away in 2002.6In 2003, DreamWorks Animation became a separate film studio to its parent, DreamWorks SKG.7Following Open Season (2006), Surf's Up (2007), Cloudy with a Chance of Meatballs (2009) and The Smurfs (2011).