The Dodo - an Extinct Bird Content from the guide to life, the universe and everything 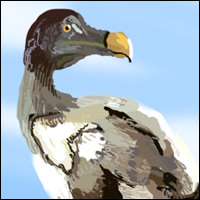 In the age of exploration man discovered wonderful creatures on every beach on which he landed. One of the creatures they found was the Dodo. We never found out what the bird was good for, as in our attempts to exploit them we managed to kill them all. This is a sad story; let's not let it happen again.

The bird was known by the common name 'Dodo', plural either 'Dodos' or 'Dodoes', alternative name 'Dronte'. Perhaps the name is derived from:

The original Latin name given by Carl Linnaeus1 was Didus ineptus. The current scientific name classification is Raphus cucullatus3.

Dodos lived on Mauritius, a volcanic island in the Indian Ocean just east of Madagascar, for quite possibly millions of years. Dodos evolved on these islands from a flying bird to the friendly, walking bird that the first human explorers found.

The birds first encountered humanity with the arrival of Portuguese sailors and Dutch colonisers in the 16th Century AD. The islands were on the downwind track of their trade routes. These sailors and colonists were amused by the friendly, easy-to-catch birds and slaughtered them for food.

How to Prepare a Dodo for Dinner

Trying to find the perfect recipe we killed the last bird.

What else to serve these hungry, hardworking sailors?

If not eaten, dodos were just happy running or staggering around their island4. With their specialised long, crooked, and hooked beak, they ate fruits, seeds or nuts. Dodos seemed to eat stones and rocks as well, and perhaps some fruits de mer5. They did not have any natural enemies. The nests in which they laid their eggs were just clearings on the ground that were covered with grass. The female dodo laid a single, big egg hidden deep in the forest. She would use her large beak to defend herself and her chick.

Researchers have extracted DNA from the remains of a Dodo to find out where the bird came from. The fragmented DNA strings showed a close relation to the Nicobar pigeon (Caloenas nicobarica). There was an Asian pigeon from which the Dodo and Nicobar diverged about 42 million years ago. At the time this Entry was written, scientists were not able to recombine the DNA fragments for an attempt to reconstruct the genetic material.

The only verified facts about dodos are these:

Did we eat these birds or not?

Some stories report that dodos were easy to catch and describe herding the birds to the ship for slaughter. Other stories state that no dodo bones were found in the middens6. Besides, they were called Walghvogel (ie, nauseating birds). Perhaps the ships used them as provisions while the colonists had something better to eat.

What did the dodo eat?

Many animals eat stones that aid digestion by grinding hard bits of food. In addition many birds keep their beaks in condition by rubbing them against stones. Analysis of dodo remains show that they could eat fruits, seeds and nuts. Also, many animals need additional minerals in their diets. Volcanic islands such as Mauritius do not have much limestone. Instead of shellfish, the birds would have most likely have eaten the shells as their only source for chalk.

Was there a relationship with the dodo tree?

The extinction of the dodo was once believed to endanger the Calvaria tree (Sideroxylon grandiflorum, now given the common name of dodo tree). The seeds sprout only after digestion by an animal, and this was thought not to have happened since the extinction of the dodo. Research has proven the seeds can also be digested by turkeys, which have been introduced to Mauritius as a replacement of the dodo. This strongly suggests that the birds did eat the fruits of this tree. Recent, more accurate tree dating points to the broad-billed parrot (Lophopsittacus mauritianus, now also extinct) as being alternative Calvaria seed digesters. Older dodo trees - ie, those over 300 years old - look different from the young ones. This has led to the idea the tree was going extinct. The question remains whether the dodo had anything to do with this tree.

How active was a healthy dodo?

Compared to related birds, dodos had relatively short, upright legs. The changing weight of the birds was suggested to follow a seasonal pattern. Later on, bone fragments were forensically analysed as belonging to, on average, rather athletic animals. This does not mean that the birds were exclusively active or inactive; it is possible that the birds alternated between a low-activity period during the monsoon season and an active period during dry weather (or vice versa).

The solitaire was another species on another island; it was given this name due to the species' habit of living in solitary pairs. There is at least one report about a dodo mother defending her chick. Animals that do not live in large groups cannot be easily herded together, as the sailors did with the dodos. These facts suggest that dodos did live in groups. By watching each others' white tails they could stay together in the woods.

1'Father of modern plant and animal classification'2 (1707 - 1778).2Taxonomy.3Even their name has become extinct.4These bits of information are derived from several written reports. These reports are mere coincidental observations by colonists and sailors.5Seafood.6Kitchen waste dumping site.