The Ultimate Aardman Animated Film Guide: 2015 - 2019 Content from the guide to life, the universe and everything 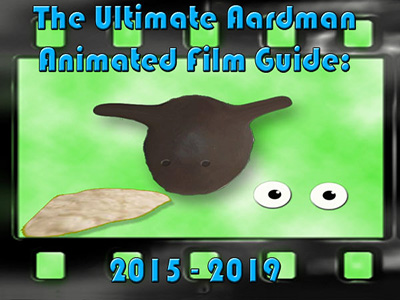 Aardman is Britain's most successful and best-loved animation studio. Founded in 1972 by Peter Lord and David Sproxton it has been associated with stop-motion animation since creating television character Morph in 1976. Yet it was Nick Park's short film A Grand Day Out starring Wallace and Gromit, an inventor and his dog, that launched the studio on the path to greatness. Creature Comforts won the Best Animated Short Film Oscar in 1990, Wallace and Gromit short film The Wrong Trousers won it in 1993 and A Close Shave won in 1995, the latter introducing the pivotal and popular character of Shaun the Sheep.

By 2015 Aardman had moved into full-length feature films. Between 2000 and 2014 they had made three considerably successful films, but also two films that were less successful than had been hoped. Although they had dabbled in computer animation, it was in their stop-motion filmmaking that they had found their niche. Yet they were no longer the only major stop-motion animation studio; better-funded American rivals Laika had moved into the same field. Laika had released three critically acclaimed stop-motion films by 20151 and would release two more films between 2015 and 20192, the second of which, Missing Link (2019), was made for the same budget as Aardman's three films in this period put together.

The other difficulty that Aardman faced was that their previous films had been co-produced with major Hollywood studios: DreamWorks Animation and Sony Pictures Animation3. Yet following disappointing performances with Flushed Away (2006) and The Pirates! In an Adventure with Scientists! (2012) these partnerships had been dissolved. In the years between 2015 and 2019, none of their films would be co-produced by an American studio. The largest film markets in the world are China, which strictly limits the number of films imported each year, and the United States of America, a market that is dominated by the established film companies and distributors, making it very difficult for independent and overseas films not co-produced by one of the major studios to be widely shown there.

Below are listed the three films Aardman made during this period. Characters and actors in Bold appear in more than one film. Also mentioned is whether the films pass the Bechdel Test. This can be summarised as whether the film involves two or more named female characters who have a conversation together that is not about male characters. Of the three films made in this period, only one contains any dialogue: both Shaun the Sheep films feature only grunts and murmurs (including between named female sheep). This makes them ideal for international distribution and adds to their worldwide appeal.

Shaun the Sheep is an adaptation of the popular television series featuring the character first seen in A Close Shave. As Aardman's Shaun the Sheep television series had been broadcast in 170 countries worldwide, and Shaun had been voted Britain's favourite BBC children's character of all time in 2014, a film version seemed perfect. The film was financed in a one-off deal by French company StudioCanal, a company that had begun as a cable television channel, acquired a vast media library and made numerous French language films and was keen to expand into the potentially more lucrative English-language market. They hoped to build on the success of Paddington (2014).

Shaun the Sheep was released in Hong Kong to coincide with the start of the Chinese Year of the Sheep in the hope that it could thus break into the highly lucrative Chinese market4. It was Oscar-nominated, losing to Pixar's Inside Out, and was the eighth most-successful stop-motion animated film ever. Released in over 70 countries and making almost four times its humble budget, its success immediately led to talks of a sequel. This encouraged StudioCanal to fund further Aardman films and be involved in their distribution.

This film was Aardman's most ambitious stop-motion project ever to date, utilising more and bigger sets than ever before. Animating the game of football in stop-motion, in which a ball frequently moves in mid-air, in itself is a challenge. Yet this wasn't the studio's first involvement with a film set in the Stone Age. Aardman had signed a five-film picture deal with DreamWorks SKG in 1999 and proposed a cave man film written by John Cleese called Crood Awakening. DreamWorks Animation retained the rights to this, releasing it as The Croods in 2013.

Financed by the BFI (British Film Institute) using National Lottery funding, and distributed by StudioCanal, this film cost $50 million to make - as much as the two Shaun the Sheep films combined. Released six months before the 2018 football World Cup, disappointingly it only made $54 million from its original cinematic release despite positive reviews. This has been put down to the Game of Thrones Curse6 as Maisie Williams is best known as playing Arya Stark in that television series (2011-2019).

The film opens with two dinosaurs fighting very much in Ray Harryhausen's dinosaur style, as exemplified by One Million Years BC (1966). At the very end it is revealed that the dinosaurs are named Ray and Harry in his honour. Queen Oofeefa is named after football organisation FIFA7.

Also called Farmageddon: A Shaun the Sheep Movie, this film is another masterpiece that will more than enchant those who enjoyed the first film. For adults one of the delights of this film is spotting the references to other popular science-fiction. There are nods to The Hitchhiker's Guide to the Galaxy with a supermarket named Milliways after the Restaurant at the End of the Universe, spoofing real supermarket chains Gateway and Safeway. There is a petrol station named HG Wheels. There are also references aplenty to Doctor Who, 2001: A Space Odyssey, Close Encounters of the Third Kind, The X-Files, E.T.: The Extra-terrestrial, Star Wars, Jeff Wayne's Musical Version of The War of the Worlds, and many more. Even the very first Wallace and Gromit short film A Grand Day Out appears8, seen on televisions in the town's electrical shop.

The farmer's plan, after seeing crop circles in his field, to open an over-priced but terribly disappointing theme park has a basis in reality where, in recent years in the UK, there have been farmyards opening as extortionately-priced Christmas-themed wonderlands that fail to match their purported descriptions.

The credits proudly proclaim: No sheep were probed in the making of this film.

At the end of 2019 Aardman's future continued to look positive, with a sequel to their greatest success, Chicken Run, in production. A Shaun the Sheep Movie: Farmaggedon's performance was also looking strong; the film overtook Missing Link, its Laika rival, to become 2019's most successful stop-motion animated film.

As the decade changed the studio embraced new technologies to ensure their films are seen. Unlike the major Hollywood animation studios that block-release their films in all territories simultaneously by using their established worldwide distribution network, Aardman's films distributed by StudioCanal are released in a more piecemeal, country-by-country approach. Though StudioCanal are an established distributor in their native France, Britain and Ireland, Germany and, since acquiring Hoyts Distribution in 20129, New Zealand and Australia, outside those countries Aardman and StudioCanal rely on persuading potential distributors to release the film. In the Americas (North, Central and South) Aardman have signed a deal giving Netflix distribution rights to A Shaun the Sheep Movie: Farmaggedon on their online platform in a deal in which Netflix also provide funding for Aardman to make them a ('television') Christmas special.

1Coraline (2009), ParaNorman (2012) and The Boxtrolls (2014).2Starting with Kubo and the Two Strings (2016).3Sony is a Japanese company that owns Columbia Pictures, which is a Hollywood studio and major film distributor.4It was shown in the Beijing and Shanghai Film Festivals.5Gravelle and Goona discuss the opposing football team, where every player is male.6It has been speculated that films starring members of the Game of Thrones main cast seem to consistently underperform at the box office. Examples include Pompeii (2014), Terminator: Genisys (2015), Solo: A Star Wars Story (2018) and X-Men: Dark Phoenix (2019).7Fédération Internationale de Football Association.8Made almost exactly 30 years before this film's release.9Hoyts Distribution is now a different company to Hoyts Cinemas, which is owned by Chinese company the Wanda Group.