'The Pirates! In an Adventure with Scientists' - the Film Content from the guide to life, the universe and everything 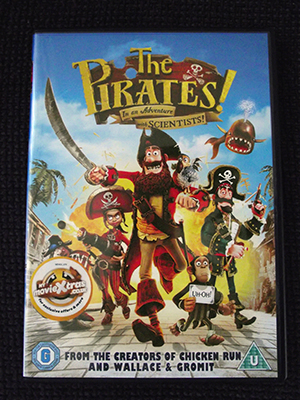 It is 1837. A ragtag bunch of pirates enjoy looting, cutlasses and Ham Nite, but the Pirate Captain longs to win the Pirate of the Year competition. He meets Charles Darwin, who realises that the ship's parrot Polly is actually the last-surviving dodo. Darwin tells him there is a large prize for the winner of the Scientist of the Year competition, so he willingly exhibits Polly, hoping to win enough booty to win Pirate of the Year. He there meets Queen Victoria, notorious for her hatred of Pirates, and discovers that Darwin and his butler Mr Bobo are not all they seem.

The Pirates! In an Adventure with Scientists is an Aardman Animations film from 2012 based on the book of the same name by Gideon Defoe. It is also known as The Pirates! Band of Misfits1. It was made using a blend of stop-motion animation and CGI and had a budget of $55 million.

Gideon Defoe wrote the screenplay for the film, and it was directed by Peter Lord (a founder of Aardman Animations) and Jeff Newitt. Fairly successful at the box office, it didn't do as well in the USA as had been hoped, so plans to produce sequels based on other Pirates! books by Defoe were dropped. A short film So You Want to Be a Pirate? featuring the same characters was made in 2012 and is available on some DVD editions. As its title suggests, the short film gives viewers hints and tips about how to be a Pirate, including beard maintenance and the cooking of ham.

The Pirate Captain is voiced by Hugh Grant, who is probably best known for his roles in films by Richard Curtis, most notably Four Weddings and a Funeral. Pirate Captain has a large curly beard, which is useful for storing things like umbrellas in. His crew are supportive of his dream to win the Pirate of the Year Competition.

Imelda Staunton plays Queen Victoria as a youthful yet powerful monarch. Imelda is now perhaps best known for her role as Dolores Umbridge in the Harry Potter film series but she has had a range of other parts, including Mary in the 1992 film Peter's Friends

Charles Darwin is voiced by David Tennant of Doctor Who fame. In this film, Darwin is a young man on a scientific expedition - he enjoys his work but is mainly trying to impress girls2. In London he lives in a large house and has trained his simian butler to 'speak' via the use of flash cards.

The Albino Pirate is voiced in the UK version by Russell Tovey, who is known for sitcom Him & Her as well as the supernatural Being Human. In the US, the voice was provided by Anton Yelchin, Chekov in the Star Trek reboot films. The Surprisingly Curvaceous Pirate is voiced by Ashley Jensen, whose breakthrough role in Extras led to her playing Christina in the US TV series Ugly Betty. She had also lent her voice to the earlier Aardman film Arthur Christmas. The Pirate with Gout is voiced by Brendan Gleeson, who had played Mad-Eye Moody in Harry Potter. The Pirate who likes Sunsets and Kittens is voiced in the UK by Ben Whitehead, who had also lent his voice to other Aardman films, and in the US by Al Roker, a producer and regular contributor to animated films.

The Pirate King, voiced by the booming Brian Blessed, is like Elvis Presley, the King of Rock and Roll. He wears a flashy white suit encrusted with rhinestones and has great stage presence at the Pirate of the Year Awards.

Pirate Captain's rivals for the title of Pirate of the Year are Cutlass Liz (played by the Mexican/Lebanese Salma Hayek), Black Bellamy (Jeremy Piven, who went on to take the role of Mr Selfridge in the TV series of the same name) and Peg Leg Hastings (played by comedian Lenny Henry).

The film is rated U (suitable for all) in the UK, as there is plenty for children to enjoy, with its bright colouring and funny scenes. There are innuendoes, bad language and scary moments at times, though - in particular blades feature fairly prominently - so an adult may prefer to sit with a child on first viewing the film. Adults will also find things to enjoy, as the original book is more for adults than children, in spite of the enthusiastic title. There are amusing details and interesting references to look out for. The Pirates try to plunder various ships, including a Naturist boat. They head to France for some Duty Free alcohol before going to London, then we see Jane Austen and Joseph Merrick in a bar. At one stage, Darwin is covered in a foam of baking soda mixed with vinegar, giving him the white hair and bushy beard that feature in the most well-known picture of the man himself. Queen Victoria paraphrases the famous quote by Queen Elizabeth I - 'I may have the body of a weak and feeble woman, but I have the heart and soul of a person who really, really wants that dodo!'

The humour in the film ranges from visual gags that children would appreciate, such as the Pirate Captain making baby clothes, or having his pirate badge with googly eyes confiscated, to comedy that would be appreciated more by adults, such as Queen Victoria's steam-powered arsenal of weapons. Some attempts at humour hinge on stereotypes (for example the studious Darwin is accused of having a 'girly throw') and some of the humour is very near the bone, such as the mention of looking down ladies' tops from the vantage point of an airship3. Similarly, there was a proposal to include a joke at the expense of people with leprosy, and a scene in which the Pirates boarded a 'leper ship' was even included in the film's trailer. However, the scene was criticised by Lepra Health in Action for promoting derogatory stereotypes of leprosy. In the finished film the pirates boarded a 'plague ship' instead.

The animation displays excellent attention to detail and is cleverly done. For example The Pirate with Gout has a Blue Peter Badge on his hat, and Darwin's house contains many items including preserved animals and an Easter Island head. The oceans of water and seas of gold are computer generated but other details, such as sloshing wine and swinging dinosaur skeleton, are cleverly modelled using jelly, wire and other model making tricks. The backgrounds are rich in detail, too, such as a sign indicating that Blood Island is twinned with Weston-Super-Mare, humorous shop names like DK Ying the dentist, newspapers and magazines with headlines such as 'Blackbeard shows off his new beach body', and posters on walls including Neighbourhood Watch. There is even a Golf Sale placard. Some of the details are included to be particularly impressive in 3D, as the film was released in both 2D and 3D versions. For example there is a pie fight, and some of the pies are thrown towards the viewer. Queen Victoria's palace and Darwin's house also contain impressive depth. The end credits are worth watching, to see more of the posters and other ephemera as well as a 'Where are they now?' mini feature.

The music is a key part of the film - a range of traditional and pop songs add to the atmosphere, from seafaring songs like 'Blow the Man Down' to the jaunty 'Alright' by Supergrass via the classical 'Also Sprach Zarathustra'4 by Richard Strauss. Other songs in the film are 'Rule Britannia' by Thomas Arne, 'Fiesta' by the Pogues, 'Train to Skaville' by The Ethiopians, 'London Calling' by The Clash, 'Sailing Out on the Ocean', Tenpole Tudor's 'Swords of a Thousand Men', 'The Girl from Ipanema', 'Waiting for the Robert E Lee', 'I'm not Crying' by Flight of the Conchords, 'Ranking Full Stop' by The Beat, 'Morgenblätter' by Johann Strauss II and Desmond Dekker's 'You Can Get it if you Really Want'.

The Pirates! In an Adventure with Scientists was released on DVD and Blu-Ray in 2012. Extras include short 'Making of' documentaries, and Mr Bobo's Flash Card Challenge game, where you have to guess common phrases from clues on a card.

1The word 'scientists' was considered to have negative connotations in the USA.2Much like Gideon Defoe was when he wrote the original book.3That was taken straight from the book. Sadly the (male) director even confessed the team thought it was difficult to animate a woman, which didn't help to deflect criticism of sexism in the film.4Elvis' theme song that announced his presence at a performance.