'Peter's Friends' - the Film Content from the guide to life, the universe and everything 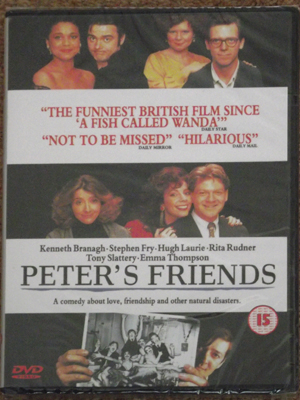 Peter's Friends is a British film that was released in 1992. It was produced and directed by Kenneth Branagh and was written by Rita Rudner and her husband Martin Bergman. Kenneth Branagh and Rita Rudner also appeared in the film as husband and wife alongside Stephen Fry and other established British actors. It was a Renaissance Films production in association with the Samuel Goldwyn Company and Channel 4 Films and received a 15 certificate in the UK because of strong language and adult scenes. It was first released on DVD in 2008 and a new edition was issued in 2014.

The film opens with the titular friends performing a comedy dance routine in the dining room of Peter's father's stately home1 on New Year's Eve 1982. They then leave the makeshift stage and go into the kitchen, where they meet the housekeeper Vera and her son Paul. Vera takes a photo of all the friends together. A montage of news footage from 1982 onwards (including iconic pictures of Margaret Thatcher, Ronald Reagan, Nelson Mandela, the Teenage Mutant Ninja Turtles and finally John Major) fast-forwards the action to the time when the friends are gathering to attend a party on New Year's Eve 1992 in the stately home following Peter's father's death.

Since their last stay in the house, the friends have lived separate lives, but brought together again they find their lives are more intertwined than they had thought. Their private thoughts and experiences gradually emerge, to strengthen the ties between Peter and his friends.

Stephen Fry is well cast as the self-confessed bisexual celibate Peter, trying to find his own way in the world now he is not in the shadow of his father, but still reliant on Vera as his mother figure.

Actor and director Kenneth Branagh has a strong role as Andrew, who is realising that his three-year-old marriage to Carol (Rita Rudner) is disintegrating and he doesn't know who he really is.

Emma Thompson uses the comedy and tragedy skills that she honed in sketch shows and Shakespeare adaptations to play Maggie as an amusing character that people can still sympathise with. At first Maggie is a bit of a caricature of a spinster, with her dowdy clothes and pet cat, but there are poignant scenes where she confesses her (unrequited) love for Peter, first to Andrew while they are walking in the gardens of the house and later to Peter himself in the middle of the night.

Hugh Laurie has a more sombre role as the bereaved Roger, but although his comedy skills are not used often, he has the opportunity to show off his musical ability as Roger is a jingle writer and skilled piano player.

Imelda Staunton had had roles in television dramas before Peter's Friends, and she went on to find fame in a variety of films including Vera Drake and the Harry Potter series. She is well cast as the bereaved and anxious Mary, Roger's wife, struggling with her feelings after the loss of a child, but managing to find a way to reconnect with her husband.

Alphonsia Emmanuel was known for TV dramas such as House of Cards before being cast as Sarah, Peter's friend and Andrew's ex. Sarah struggles with the idea of commitment - she is having a passionate affair with married Brian (Tony Slattery) when she arrives at Peter's house, but when Brian's wife dumps him via a telephone call, Sarah finds she doesn't like him that much after all.

There is a blink-and-you'll-miss-it cameo from Richard Briers (of The Good Life fame2) as Peter's father. Phyllida Law, who plays Vera, was known for television plays and various roles in TV series' including Dixon of Dock Green and Rumpole of the Bailey before her appearance in Peter's Friends, and she later worked with Stephen Fry (and Tony Slattery) again as Aunt Auriel in the TV series Kingdom.

Many of the people involved with Peter's Friends were friends outside of the film as well, so the chemistry between the characters is genuine. Stephen Fry and Hugh Laurie had been a double act since the 1980s3, and they had also been members of the Cambridge Footlights before that, with Tony Slattery and Emma Thompson. Phyllida Law is Emma's mother, and Emma had married Kenneth Branagh in 19894.

One of the strengths of the film is its soundtrack, which was released on CD to accompany the cinema release. The music ranges from classical (the comedy routine at the start of the film is the Can Can, danced to Offenbach's 'Orpheus in the Underworld') to modern (the song 'As the Days Go By' by Daryl Braithwaite was written in 1991) but mostly consists of classic 1980s pop songs (such as 'Everybody Wants to Rule the World' by Tears for Fears, Bruce Springsteen's 'Hungry Heart' and 'Don't Get Me Wrong' by Chrissy Hynde) that fit in with the storyline well. Exceptions are when there is no music at all, so that the audience can focus on a poignant scene, and when earlier but equally appropriate songs are played. Such songs include Nina Simone's 'My Baby Just Cares for Me' from 1958 (although Aardman Animations had made a music video for the song in 1987 so it was in the charts in the 1980s), and the very apt 1976 song 'You're My Best Friend' by Queen.

The film explores the changes in friendships over time, as people find jobs and partners but still feel connected to each other. It also makes points about sexuality in the 1990s - the friends all have different types of relationships, from Roger and Mary who married young, to Sarah who didn't want to settle down, to Maggie who lived alone. For Peter, his sexuality was overshadowed by the threat of HIV and AIDS - Freddie Mercury of Queen had died in 1991, and other famous names were also facing the disease, so Peter had also lost people since he left university. By New Year's Eve only Vera, Peter and his friends were in the house as Carol and Brian had gone, so after the clock struck midnight and all the secrets had been revealed, the friends rallied round each other.