John Deacon - Bass Guitarist of Queen Content from the guide to life, the universe and everything 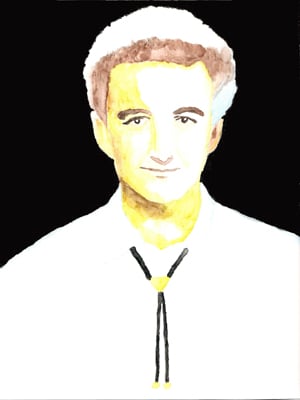 John Deacon is not the most well-known of all the members of the band Queen1 but as the bass guitarist of the group he played an important role in Queen's success.

Even now2 he has retired from Queen and usually leaves Brian May and Roger Taylor to do what they want with the Queen name, he still has a huge fan base of people who love his music, his quiet style and his deep respect for Freddie Mercury.

John Deacon was born on 19 August, 1951, in Leicester, England. He was interested in music from an early age and, influenced by The Beatles, he learned to play the guitar. He joined his first band, The Opposition, when he was just 14 and initially had the role of rhythm guitarist, but had to switch to bass when the band's line-up changed and the vacancy arose.

In 1969, John left his band and Leicester and went to London to study electronics, but he took his guitar with him. At a party in 1971, he met Freddie, Brian and Roger, who were in a band called Queen. They were struggling to find a bass guitarist they could work with3, so John was asked to audition.

For the audition, he used an amplifier he had built himself. This would later be referred to as 'The Deacy Amp'4 - it had a particular tone that other amps of the time couldn't produce, so it was often used in recording studios to create special effects on Queen tracks. His skills impressed Brian, Roger and Freddie so he got the job.

John was credited as Deacon John on Queen's first album Queen 'to make him sound more interesting'. The same pseudonym was initially to be used on the sleeve for the second album Queen II, but by then John had settled into the band more and felt able to object, so his usual name was restored.

While at Chelsea College, University of London, John met Veronica Tetzlaff, who was studying to be a teacher, and they started dating. John graduated from university with a First Class honours degree in 19725.

Veronica became pregnant in 1974, and as her family were of Polish Catholic origin, she and John were encouraged to get married. The wedding took place in January 1975. John's Best Man was Nigel Bullen, who had been drummer with The Opposition. Freddie turned up in flamboyant style with a feather boa augmenting his outfit.

Veronica and John have six children - five sons and a daughter. The eldest child is Robert, born in July 1975, and the youngest is Cameron, born in November 1993.

When the albums Queen and Queen II were released in 1973, John was the outsider as all of the songs had been written before he arrived on the scene. He made his mark on the bass lines, though.

His bass parts are like little stories, yet he never gets in anyone's way.
– Danny Miranda, Bass Guitarist

During the recording of Queen's third album, Sheer Heart Attack, John went off by himself and came back having written the song 'Misfire'. For this song, he composed and recorded all the guitar tracks himself, not just the bass, but he left the vocals to Freddie6.

His second song, and his first to be released as a single, was 'You're My Best Friend', from the album A Night at the Opera. Again he worked on it mostly on his own, and this time he recorded its electric piano track as well as the bass line. The song reached Number 7 in the UK Charts and so became one of Queen's Greatest Hits7. John learned to play the double bass at this time and used his new skills in the recording of Brian's song '39'8.

'You and I' was his next composition, for the album A Day at the Races. It was used as the B-side for Brian's 'Tie Your Mother Down'. He was allowed two songs on Queen's following album News of the World, so he penned 'Who Needs You?' and 'Spread Your Wings'. The latter was released as a single in the UK but only reached Number 34.

Two of his tracks appeared on the album Jazz in 1978. One was 'If You Can't Beat Them', and the other was a little ditty about holiday romance, 'In Only Seven Days', which became the B-side for Freddie's 'Don't Stop Me Now'. In 1980 he composed two songs for The Game. 'Need Your Loving Tonight' was just an album track, but the other song was much more than that. The single 'Another One Bites the Dust' reached Number 7 in the UK, matching his first chart success, but in several countries including the USA it became Number 1. Not Queen's usual style, it was Michael Jackson who suggested that it should be released. The song found fans in the dance music scene and it was played on US Black radio stations. The song's anthemic influence extended through the decades, seeing a resurgence in the 1990s as it was used in the television programme 'Gladiators' whenever a contender was defeated. It is still a popular choice at sporting events even now9.

The funk style of his compositions continued into 1982, but his chart success didn't – 'Back Chat' only reached Number 40 in the UK and failed to chart in America. For the album Hot Space he co-wrote (with Freddie) the song 'Cool Cat' (the B-side for the Brian-penned song 'Las Palabras De Amor'). 'Cool Cat' was the first of several collaborations between the bassman and the singer.

John contributed just one song to the album The Works in 1984, but he made it count. 'I Want to Break Free' soared to number 3 in the UK charts, helped by the accompanying video, which included Freddie recreating Nijinsky's role in the ballet Prelude de l'Apres Midi d'un Faun, Queen fans with candles and a homage to Coronation Street (requiring the band members to dress up as women). The video also saw John's hair at its peak, in a style referred to as the 'Deaky Do'10.

The song was well received around the world except in the USA, where it languished at number 45 in the chart. In South America it was adopted as an anthem for freedom, so when Freddie appeared in drag during a live show, the audience booed and threw stuff at the stage until he changed into a suitably-respectful outfit to sing the song.

In the mid-1980s the band members all decided to spend some time on non-Queen projects. John set up a new band in 1986 called The Immortals, and released 'No Turning Back', a track for the film Biggles.

Film music was also the theme for Queen's 1986 album A Kind of Magic - most of the tracks were used in Highlander. John contributed the wistful 'One Year of Love' and collaborated with Freddie on two tracks - 'Pain is So Close to Pleasure' (which was released in the USA but didn't chart), and 'Friends Will be Friends' (which reached Number 14 in the UK).

For The Miracle and Innuendo, the last two studio albums produced during Freddie's lifetime, all four band members collaborated so all tracks were credited to Queen, but it is said that John had most input for 'The Miracle', 'Rain Must Fall', 'My Baby Does Me' and 'The Hitman'.

John was greatly affected by Freddie's death in 1991, as were Brian and Roger. Together, they organised the Freddie Mercury Tribute Concert that took place on 20 April, 1992, in Wembley Stadium. John had some involvement in putting together the album Made In Heaven that was released in 1995. He also played bass guitar and featured in the video for the 1997 song 'No-One But You (Only the Good Die Young)' written by Brian and sung by Brian and Roger. Away from Queen, John contributed to a few other musicians' work, playing on Brian's solo album Back to the Light and working with The SAS Band, which was set up by Queen's keyboard player, Spike Edney.

John now stays away from the limelight, spending time in Europe on holiday, or continuing to learn about electronics and computing, but he has featured in newspaper articles a few times since he left Brian and Roger to use the Queen name without him. Usually content to let his former bandmates do what they liked, he did comment in 2001 that 'Robbie Williams is no Freddie Mercury' when the Take That singer covered 'We are the Champions' and it was rumoured that he would become the lead singer for Brian and Roger's Queen+.

The tabloids again took an interest in him in 2005, when it was discovered that he had been visiting a strip club in London and had become friends with a lap dancer, giving her gifts and taking her out for meals in exclusive restaurants. He also regularly featured in The Times Musicians Rich List, having personal wealth of over £50million thanks to his success with Queen.

In spite of all that, wherever he may be and whatever he may do, the quietly enigmatic John Deacon will still be in the thoughts of Queen fans everywhere.

1That honour goes to the frontman Freddie Mercury.2Or perhaps because.3They had tried numerous people, most of whom tried to steal the limelight from Freddie or Brian, which just wouldn't do.4Pronounced 'Deaky'.5As he had been studying at the same time as working for Queen to ensure he had a back-up if his music career didn't take off.6John occasionally contributed backing vocals at live gigs, to improve the multi-layered effect, but in interviews he often said: 'I can't sing.'7Only Freddie's compositions had had better success up to that date - 'Killer Queen' reached Number 2 in 1974 and 'Bohemian Rhapsody' claimed the Number 1 spot in 1975. Brian's 'Now I'm Here' managed Number 11 in 1975, and 'Keep Yourself Alive' didn't even make the Chart when it was released in 1973.8He later played double bass for Brian's 'Who Wants to Live Forever' and his playing featured in the video for the song.9No doubt earning Mr Deacon some royalties occasionally.10Also 'Deacy Do' - a gravity-defying back-combed hairdo.