Hugh Laurie - Actor and Comedian Content from the guide to life, the universe and everything 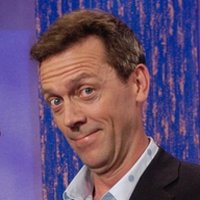 Hugh Laurie, whose real name was Hugh Laurie, was better known by his stage name, Hugh Laurie. Hugh was born and brought up in a working-class home that his parents had specially built in the grounds of their Gloucestershire estate.
- From an episode of A Bit of Fry and Laurie.

James Hugh Calum Laurie, or Hugh Laurie as he is better known, is a comedian, actor and writer, who was born on 11 June, 1959 in Oxford, England, UK. As a child he was educated at Dragon School, a preparatory school, before attending Eton and then Selwyn College, Cambridge where he later graduated with Third Class Honours in Archaeology and Anthropology.

Hugh's father won a gold medal for rowing in the 1948 Olympic Games. In 1977 Hugh took up the same sport and rowed for the England youth team and also for Cambridge in 1980. However, he had to give up the sport after a bout of glandular fever.

He was not meant for an athletic career anyway. His early inspiration for humour came from the works of English humorist PG Wodehouse. When Hugh was in his teens he picked up Galahad at Blandings and eventually he wrote an essay entitled Wodehouse Saved My Life.

The funniest writer ever to have put words on paper.

He is also a fan of the actors Clint Eastwood and Steve McQueen. Hugh is probably best known for his portrayal of hilariously dim-witted idiots but has also played serious roles, too.

At Cambridge Hugh was a member of the prestigious student theatre club Footlights, which he even became president of in 1981. In Footlights he met his then-girlfriend Emma Thompson, who also became a famous actress.

He is very, very loveable. He is one of those rare people who manages to be lugubriously sexy, like a well-hung eel.

When Hugh was looking for someone to help him write a pantomime, Emma introduced him to her friend, Stephen Fry. He and Stephen later became a hugely successful comedy duo, working together in movies and television. In 1981 they were involved in a play called Cellar Tapes which was performed around Britain, including at the Edinburgh Fringe Festival where it won the first Perrier Award. It was also on in the West End, briefly, before going to Australia.

Hugh has also been in charity performances like The Secret Policeman's Third Ball and Hysteria!. He also starred in Ben Elton's West End play Gasping in 1990.

Hugh's first appearances on television were in commercials, including a Polaroid advertisement in 19811. He later went on to small parts in sitcoms, such as Lord Monty in The Young Ones, along with Happy Families and Al Fresco.

The following are his major television roles:

Well, cover me in eggs and flour and bake me for 14 minutes!

Hugh co-starred in Blackadder, a comedy starring Rowan Atkinson as the numerous incarnations of the vindictive Edmund Blackadder throughout history. In the second series he had a part in one episode as the evil master of disguise, Prince Ludwig. In series three he played the incredibly stupid George, the Prince of Wales and in the fourth series he played Lieutenant George, who was equally stupid, describing himself as being as 'thick as the big print version of the Complete Works of Charles Dickens'.

A Bit of Fry and Laurie

Dead since 1973
You've been dead, now wait a minute let me see...
Fifteen years come next January2
As a human being, you are history
- 'Mystery', a song written and performed by Hugh

A Bit of Fry and Laurie was a BBC comedy sketch show which he wrote and acted in with Stephen Fry. The show's pilot episode was aired in 1986 and the series ran for four seasons from 1989 to 1995. The show featured numerous guests such as Imelda Staunton, Stephen Moore and Rowan Atkinson. Hugh's musical talent often came in handy during this show as it featured music spoofs, such as when he performed 'Hey Jude' on helium.

In the 1990s, Hugh played Bertie Wooster, starring alongside Stephen Fry as Jeeves in the ITV series Jeeves and Wooster. This series was based on the novels and short stories by PG Wodehouse about a (dim-witted) gentleman and his (brilliant) gentleman's gentleman, or valet. He played Bertie to perfection, though some similarities to his Blackadder characters are evident.

When they were initially offered the roles, they originally declined saying it wouldn't be possible to bring Wodehouse's work to the screen satisfactorily. However, they later accepted, and Hugh said 'if anyone's going to bugger it up, it's going to be us'.

In 2004, Hugh became a doctor. On television, that is. Though for years he has been well-known in Britain, it wasn't until House MD, now just abbreviated to House, that he properly caught the attention of American audiences3. In this series on the FOX channel in America he plays the title character, Gregory House: a grumpy, cynical, curmudgeonly, friendless yet incredibly brilliant doctor. For this character, Hugh puts on a perfect American accent. So good, in fact, that the show's director, Bryan Singer, didn't know until after the audition4 that he was in fact British.

House has a wounded leg and walks with a cane and is addicted to Vicodin, a pain reliever. The character also has an intentional resemblance to Sherlock Holmes. House often uses powers of deduction along with many other characteristics shared with the fictional Victorian detective. To people who know Hugh from Blackadder and Jeeves and Wooster, it is interesting to see him in a more 'serious role', though Doctor House's character can sometimes be dryly humorous.

In 1992, Hugh saw his film debut as Roger Charleston in Peter's Friends, in which he acted alongside Stephen Fry, Emma Thompson and Kenneth Branagh. Many more movie roles were soon to follow, including Mr Palmer in a movie adaptation of Jane Austen's Sense and Sensibility which was directed by Emma Thompson, Maybe Baby, written by Ben Elton, and The Girl From Rio.

He has also been in several children's movies such as 101 Dalmatians, in which he played the henchman, Jasper. A few years later he played Frederick Little in the Stuart Little movies, and was the voice of Gutsy, a homing pigeon in Valiant.

In the 2006 Superman Returns, he was cast to play the Daily Planet newspaper editor Perry White, but he could not go through with the job as he had other commitments with filming House.

In 1996 Hugh published his first novel, The Gun Seller, a thriller. He originally started writing it as a screenplay for a movie, but changed his mind and turned it into a book instead. Now that the book was successful, he is working on the screenplay again, as it is being planned to be made into a movie. He originally submitted The Gun Seller under a pseudonym, as Hugh wanted it to be accepted for publication on its own merit, not just because a celebrity wrote it.

The book is about Thomas Lang, a hitman who is hired to kill an American businessman. The story involves CIA agents, terrorists, a missile and of course, as with all spy novels, the obligatory femme fatale. The story is a spoof of the spy thriller genre like James Bond, and the PG Wodehouse influence is also evident, particularly in the character Solomon, Thomas's colleague, who is much like Jeeves.

Hugh's next novel, Paper Soldier, is to be published in 2007.

Hugh plays piano, saxophone, harmonica, acoustic guitar, slide guitar and can sing. This talent has been used in many of his television shows as he often played piano in Jeeves and Wooster, A Bit of Fry and Laurie and even House. He also performed a (very vague) protest song on the guitar and harmonica when he hosted Saturday Night Live in 2006. Hugh is in the band Poor White Trash and plays keyboards in Band From TV, a charitable music group of television stars. Hugh has donated his share of money earned from this to the Save the Children Fund.

He was immensely dangerous. Such a dangerous actor. You always had this feeling when he was around that anything could happen. Hugh Laurie, on the other hand, was about the dullest man I ever met.
- Rowan Atkinson.

In 1989, Hugh married Jo Green and they have three children, Rebecca, Bill and Charlie. Hugh and Jo are still married today and Stephen Fry is the children's godfather. At the time of writing, Hugh splits his time living in Los Angeles and London.

1Later on he did voice-overs and appeared in other commercials, including those he did with Stephen Fry for the Alliance and Leicester Building Society.2Pronounced Jan-NOO-ary.3He has had a few cameos here and there on American TV: he was a guest on Friends as a passenger on an aeroplane, and did a voice in an episode of Family Guy.4His 'audition' was a video he recorded in a hotel bathroom.