Pantomime Content from the guide to life, the universe and everything 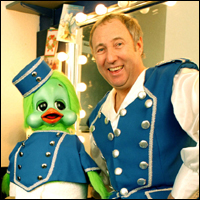 This is a uniquely British genre of comedic musical theatre which corners the market around the Christmas period, and it could be argued that the performing artistes would never get away with it at any other time of year.

Pantomime is ever-evolving and renowned for its topical content and moral battles, but most of all it's fun and at a theatre near you from November to January.

Pantomime has its origins in the improvised comedy theatre productions of 16th Century Italy. Commedia dell'Arte was a type of travelling street theatre featuring tumblers, dance, music and visual comedy. The troupes were usually made up of families and would perform at street markets and fairgrounds. Their show would involve the improvisation of several basic storylines featuring standard characters like Harlequin and Columbina and Punch and Judy.

Commedia dell'Arte spread from Italy, across France, and reached England in the mid-17th Century where language became a barrier. In order to overcome this problem the performers changed the format to include more song and dance, more visual comedy1 and of course some mime. This was intertwined with the morality plays of the time and formed the beginnings of what would be recognised as pantomime.

The first mention of the word 'pantomime' was in 1717 with a ballet-pantomime featuring a Harlequin sorcerer. The show became so popular that soon after a rival show began at the Theatre Royal Drury Lane, but with the added bonus that Harlequin actually spoke his lines.

The next step in the evolution of pantomime was the introduction of the pantomime dame in the 1800s. The most famous of pantomime dames was Joseph Grimaldi, the father of clowns2, who embraced the cross-dressing roles and helped cement this element of the tradition.

The dame carries the show and is always the mother of the principal boy. The principal boy, usually played by a female, always has a love interest, surprisingly also female. The story will invariably include the villain, the thieves or comedy duo, assorted woodland creatures, the obligatory 'foreign' type3 and the chorus line. It is also common to have a character from a different panto altogether participate to varying degrees in the show.

The costumes worn by the cast show no particular allegiance to any fashion era, unless over-the-top bad taste counts. The principal boy wears a tunic, tights and high-heeled boots; very suitable for thigh slapping, but not much use when trekking through the forest in search of the missing Babes. The other male characters also wear tunics, but can wear either thick tights or trousers. The leading lady is usually demure and innocent and will wear a calf-length or full-length dress. The dame, however, will always have the best costumes: wildly garish, often containing hidden compartments. Her costume can contain concealed props including frying pan or rolling pin, and is made specifically for the visual gags. Her skirts will normally fall to calf-length and she will usually wear a matching wig.

There are several, what could be termed as 'traditional', pantomimes. These shows are loosely based on children's tales and include such classics as Sleeping Beauty, Robin Hood, Peter Pan, Mother Goose, Jack and the Beanstalk and Babes in the Wood. The plot however, more or less remains the same. The villain tries to ruin the happiness of the principal boy and his love interest and/or steal their fortune. It always ends with the baddies getting their comeuppance and a wedding in the village. The main characters pair off including the villain who sees the errors of his ways and they all live happily ever after.

The plot is advanced - or held back, depending on your view - by the inclusion of songs. The songs can be traditional music hall fayre like Why Does The Brown Cow Give White Milk When She Only Eats Green Grass? or My Bonny Lies Over The Ocean, or indeed more modern songs from recent years. Either way the audience are encouraged to join in and sing and clap along.

Audience participation does not however end there, the audience are required to assist with the show by calling warnings like 'He’s behind you' when the villain or other unspecified danger appears. The children of the audience are also encouraged to 'hiss' and 'boo' when the villain confides his evil plans to them. This aspect of pantomime is also common in the Punch and Judy shows which date from the same era. It is believed that both shows are more enjoyable when the audience becomes familiar with the format and can participate to the full. Both audiences also have to engage in various other traditional arguments when the appropriate cue is given. For example, the best known is from the pantomime Aladdin: 'Oh no it isn't! Oh yes it is!'.

Failure to participate in the spirit of pantomime can result in the subdued members of the audience being singled out by the performers and subjected to various well-rehearsed insults.

The show, while apparently mainly for the entertainment of children, is peppered with innuendo and double-entendre for the amusement of the adult audience. Topical humour is also included and references are often made to local political issues of the day.

Approaching the end of the performance two of the characters will invite children from the audience up to the stage where they will chat with them and organise the 'competitive' singing of a short song. This will involve dividing the audience by where they are sitting in the theatre and having a 'sing off'. When the song finishes sweets are thrown out to the audience and the children are allowed to return to their seats, normally with a small gift for their participation. The purpose of this segment is to let the cast change into their wedding outfits for the last scene and the 'walk-down' where all the characters parade onto the stage to take individual bows.

It is important to note that while there is a basic pantomime story, cast and formula, every pantomime is unique to the troupe performing it. It is very unlikely that, even working from the same scripts, you would find any two pantomimes with more than a passing similarity. The pantomime evolves during rehearsals, and even during the run of the show, but the really great pantomimes are as much about the audiences that fuel the performances as they are about the antics on stage.

Over the years efforts have been made to export the concept of pantomime, but this has been largely unsuccessful, the notable exceptions are Australia and Canada where panto still pulls them in and provides a showcase for the acting skills of TV stars. If travelling at Christmastime you can catch the annual pantomime in Jamaica or Hong Kong, and although it has never really caught on in the United States, there are a few theatres prepared to continue in their attempt to bridge the humour gap.

Today the main venues for the pantomime are theatres, but television and radio stations are also known to offer performances over the Christmas period. Local schools and churches sometimes put on a short run of two or three shows in the weeks before Christmas, and if all else fails there has even been a virtual panto here on h2g2.

Oh no there wasn't! Oh yes there was!
1Which would later become known as 'slapstick' after a stage prop of the Harlequin.2 All clowns are known as Joey even today in his honour.3This character can be portrayed as a local stereotype, or rival from a neighbouring town or city.