Tips for Visitors to Hong Kong Content from the guide to life, the universe and everything 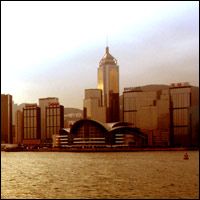 Hong Kong, or to give its more formal title, Hong Kong - Special Administrative Region of the People's Republic of China, is a busy vibrant place with an intriguing history. A cultural clash that seems to work, with Chinese and British co-existing, Hong Kong is found nestled in the eastern side of the Pearl River Delta, on the south-eastern coast of China.

In January 1841, the Ch'ing Dynasty was defeated during the First Opium War and Hong Kong quickly became a British colony. In 1898, the New Territories – a rural area north of Boundary Street in the Kowloon district of Hong Kong – were leased to Britain for 99 years. So, in 1997 Hong Kong was handed back to the People's Republic of China.

However, this did little to change the way of life in Hong Kong and it remains a wonderfully unique place to visit and enjoy.

Once you have arrived in Hong Kong, either by boat or by airplane, as there is a seaport and airport, there is a fantastic public transport system for easy travelling. Buses have internal matrix signs giving details of not only the next stop, but the estimated time of arrival (eta) and nearby major landmarks and hotels. The Mass Transit Railway (HK's equivalent of the London Underground) is clean and runs like clockwork, and the ferries between Hong Kong island, the mainland and the outlying islands are cheap and offer great views. Here are some handy hints for getting around:

It is possible to find just about any kind of cuisine in Hong Kong. From noodle bars that are little more than a hole in a wall to big, posh restaurants, you can get pretty much any kind of food you like. You could even find yourself sitting in a wood panelled room with stuffed deer heads on the walls, eating haggis and mash. However, if you want to try out the local dishes, here are a few useful nuggets for eating out in Honkers1:

When you've finished stuffing yourself silly, take a saunter down Gascoigne Road on the Kowloon Peninsula (take the MTR to Jordan, then head north up Nathan Road - Gascoigne Road is on your right). It is rammed with the cheapest clothes shops you may ever have seen. There are many bargains to be had if you are prepared to root around a bit.

On the other side of the coin, avoid the Temple Street night market, as it is largely full of 'tat' and rip-off designer goods. By all means take a look, but don't expect to find much worth buying, unless you like fake Gucci...

Things to See and Do

Besides wandering around the city and marvelling at the huge glassy skyscrapers, you may also want to check out the following:

The real charm of visiting Hong Kong though is just being able to wander the streets and take in the city itself. There are so many contrasts - towering skyscrapers right next to little crumbling buildings with corrugated iron roofs, wealthy business people strutting past little old men beating out scrap metal in the gutter, the city itself right up against mountains and forests.

Weatherwise, October, November and most of December are the best months to go to Hong Kong. You can expect sunshine and clear skies, without the expensive hotel rates that accompany the high season of March to April. Bear in mind that travel can be difficult during Chinese New Year (late January/ early February). Expect considerable heat, humidity and showers during the rainy season of June to September.

Hong Kong really lets its hair down for two major parties. One of these is the traditional Chinese New Year celebrations with lion dances, fireworks and colourful parades, but it is worth noting that during the New Year festivities many shops and restaurants close for a full week! The other major excuse for a 'knees-up' is the Hong Kong Rugby Sevens tournament, which attracts rugby fans from all over the world. Whatever time of year you might choose to visit Hong Kong though, make sure you are aware of the political environment too!

The Hong Kong Tourist Board has some valuable ideas for anyone planning a trip there.