Hong Kong Politics Content from the guide to life, the universe and everything 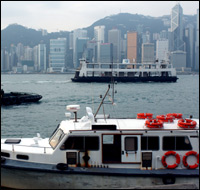 In 1997, the People's Republic of China was given sovereignty over the British territory of Hong Kong. The New Territories' lease was due for renewal in 1998 and Beijing refused to countenance its continuation.

It was decided that Hong Kong and Kowloon - territories handed to Britain in perpetuity - were far too integrated with the new towns of the New Territories to be viable as a separate entity, not to mention militarily indefensible against China, so Britain negotiated a complete handover of everything, including the territory's huge financial reserves, in return for a relatively dignified exit.

Ever since 1997, Hong Kong has been attempting to find some form of government acceptable to both the Communist Party in Beijing and Hong Kong's citizens.

The people of Hong Kong have been mostly Chinese for many years. The British settlement of the 1840s rapidly attracted immigrants from Canton who found it safe and lucrative to live under British Law. Despite the dubious reasons for founding Hong Kong in the wake of the Opium Wars, because of the peculiarities of the relationship between the local Cantonese population and China's Manchu rulers, there has always been an undercurrent of popular acceptance of colonial rule. This is, at least, a happy comparison between the chaotic and unpredictable administration of the mainland and Hong Kong's relatively good governance and legal transparency.

Consequently, politics in Hong Kong has not taken the usual route of colonial territories, in creating a native middle class who promptly agitate for power and independence. Instead, the British settlers formed close associations and relationships with the Chinese. Although much intermingling of the races took place, Hong Kong developed a unique social system of separate but parallel cultures, and the government evolved from both sides of the equation resulting in a benign authoritarianism with a wide degree of consultation with all interested parties.

After the experience of the Japanese Occupation during the Second World War, Hong Kong people wanted a more formal democratic arrangement affording more power and protection for what in Hong Kong is known as the grass roots. However, the mainland powers saw any move towards formal democracy in Hong Kong as a move towards independence and thus perpetual separation from China. Given the impossibility of defending Hong Kong against invasion, democracy in the form of an elected government was suppressed, though the informal variety was much increased and de facto power came to rest in the hands of the powerful Chinese tycoons, ameliorated by Whitehall and the various government committees manned by the middle class professionals.

In the 1960s the working class of Hong Kong made a mark in the form of riots but failed to produce a coherent political force because of the relationship between the rioters and mainland Red Guards, and the fear that Hong Kong would become consumed by the chaos created by China's cultural revolution. Large sums of money were, so it is rumoured, paid to the Communist Party to rein in its activists and quieten what were then called 'the masses.'

However, by 1997 China had changed considerably, despite the bloody end to the mainland democracy movement that took place around Tiananmen Square in Beijing, 1989. Beijing offered Hong Kong's tycoons a piece of the economic action taking place in China and fifty more years of unopposed control of Hong Kong. The middle class professionals of Hong Kong were offered little or no place in China, for they were considered to be far too mired in British education, law and liberal ideology, all of which posed a challenge to a Marxist dictatorship and therein lie the seeds of all subsequent political conflict.

In order to stop their emigration, Hong Kong's citizens, particularly the middle class professionals, were stripped of full British passports by the Thatcher government. After the 1989 Tiananmen Massacre there was a danger of Hong Kong citizens claiming political asylum and so Governor Christopher Patten increased the amount of political participation allowed by enlarging the Legislative Committee and widening the franchise, in particular within the Functional Constituencies - Legislative seats reserved for various professional and business groups.

The Mounting Challenge to Dictatorship

All these reforms were repealed after the handover and ever since, the middle classes, in the form of the Democratic Party, plus other smaller political groupings who make up the 'Democratic Camp', have been mounting an increasingly spirited challenge to the power of the tycoons (or at least their Beijing-chosen leader, Tung Chee Hwa). After a number of disastrous policy initiatives, he has discovered that he cannot govern without the middle class, not so much because of their power, but more because of their expertise in Hong Kong administration.

The dismal administrative and political prowess of Tung Chee Hwa and his advisors has even depressed Beijing and even more so Beijing supporters in the DAB, the Democratic Alliance For The Betterment of Hong Kong1. Consequently, even the DAB has extolled the virtues of developing some form of elected democracy in Hong Kong as a means of evolving better governance.

Tung Chee Hwa and the status quo are only held in place by the will of Beijing and the crumbling and never very close alliance of the tycoons. It is thought that leading up to 2006, when a new 'Chief Executive' has to be appointed, there will be much political agitation for a change of the means of appointment and the relative power of the partially popularly-elected Legislative Committee, locally called LegCo.

There is much local talk of aiming for free and open elections for the Chief Executive and a completely elected Legislative Committee by 2012. However, the mainland and its politics has always had a strong influence on political possibilities in Hong Kong, and there are still factions within Beijing who view any form of democracy in Hong Kong as de facto independence. Consequently, many observers believe that democracy will only come to Hong Kong when China itself becomes democratic. This is a prospect that does not appear to be very imminent, though politics in China, fuelled by a culture of secretive organisations, have been full of sudden and seemingly unforeseen lurches in new directions.

Given the increasing openness of China and Beijing's repeated assertions that the political system in Hong Kong is ultimately determined by them, Hong Kong's Democratic Camp have been lobbying for the right to visit the mainland2 and the right to engage in political dialogue with mainland authorities. Beijing so far refuses, claiming that their views (as are all expressed by Hong Kong citizens) are represented adequately by Tung Chee Hwa!

There have also been a number of commentators appearing in local venues telling Hong Kongers to enter the mainland and challenge the authorities in the courts over various human rights issues. They are encouraged to launch similar complaints over the authorities' habit of arresting Hong Kong businessmen and holding them without trial or legal advice when they are involved in business disputes. Perry Link, one of the editors of the Tiananmen Papers, was in Hong Kong in 2004 extolling the virtues of using the law to liberalise China, and one of the great successes of the 2004 LegCo elections were a group of lawyers calling themselves the Article 45 Concern Group3.

Where the Democratic Party is seen by Hong Kong's middle class as essentially left-wing and when not lobbying for political reform, inclined to be concerned with welfare issues, the Article 45 Group are more business-friendly and emphasise the Rule of Law above all else. They are seen as people more likely to engage in a dialogue that Beijing finds constructive, given president Hu Jin Tao's emphasis on legal reform in China.

At the end of 2004 the Democratic Camp began a campaign for a referendum on electoral reform and, if the government refuses to have one, have threatened to conduct one themselves. This is seen as an alternative strategy to the mass demonstrations that occurred in 2003 and 2004, and will increase the pressure upon the government to commit to a timetable for reform.

1A working class or, in Hong Kong terms, grass roots political party created to challenge the anglophile democrats with a mixture of socialism and Chinese nationalism.2Most of their 'Homeland Visit' visas have been withdrawn by Beijing.3Article 45 is a clause in the Basic Law, Hong Kong's mini-constitution.