Buddha Content from the guide to life, the universe and everything 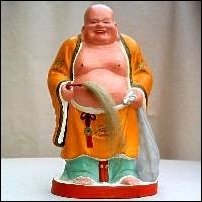 The classical image of a large, laughing Buddha is what most are acquainted with. However, the original Buddha1 was Prince Siddhartha Gautama, who was born in about 560 BC. The story goes that one day he wandered out of his palace and saw old age, decay and suffering. Depressed by what he saw, he became estranged from the luxury in which he lived and from the shallowness of the people around him.

Eventually he left the palace, and after experimenting with various lifestyles from extreme ascetism to hedonism2, he sat down under a tree - known as the Bhodi Tree - and vowed that he would not leave until his understanding was complete.

He confronted the fear of his own death, and fought off temptation and desire. At night he remembered the successive series of his previous births. 'People again and again leave the people they love when they die and have to go on to new births, without ever stopping, like a wheel in motion.'

For the next 49 years, Buddha travelled around the villages of India, speaking to the people about everyday experiences and the uses of meditation. One typical story tells of a woman who brought a dead child in her arms, begging for him to heal it. Buddha told her to bring him a mustard seed from a house where no-one had died. She returned later without the seed, having realised that death was universal.

Buddha saw that people's present experience is caused by their previous actions. He established the concept of Karma - the belief in an ego - which is a sort of ethical continuum: one's happiness or suffering is the result of one's past chosen actions, which can prompt a belief in self importance and security.

However, Buddha held that there is no security anywhere. 'We are all subject to birth, sickness, old age and death, and without an awareness of death, life can only be lived on a shallow level,' he said. 'Suffering begins from basic bewilderment. From that fundamental of not knowing who or what we are, we base perceptions on an idea of ourselves as a permanent entity.'

Buddha saw the end of suffering as enlightenment or Nirvana. His Zen* teachings point to enlightenment being found in the present moment, and all of its methods are designed to wake the student to this understanding. They stress the prime importance of the enlightenment experience and the uselessness of religious ritual and intellectual analysis for the attainment of liberation.

Buddha's last words, aged 80, were 'Everything that is born is subject to decay. Since there is no external saviour, it is up to each of you to work out your own liberation.'

The Buddhist experience thus relies on a self spiritual journey in which the person experiences the truth for themselves. The followers of Buddha trust in their own wisdom rather than trying to interpret what is said in old texts.

1Buddha literally translates as 'Awakened One'.2His rejection of both is what the 'Middle Way' is about.