The Blandings Saga by PG Wodehouse Content from the guide to life, the universe and everything 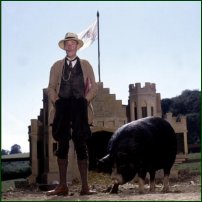 Had his only contribution to literature been Lord Emsworth and Blandings Castle, his place in history would have been assured...
- Actor, novelist, columnist and playwright Stephen Fry on PG Wodehouse.

Sir Pelham Grenville Wodehouse, a renowned English humour writer of the 20th Century, wrote nearly a hundred comedy books during his astonishing career, the most popular of which is probably the Jeeves and Wooster series about Bertie Wooster and his ingenious valet, Jeeves. However, Wodehouse also wrote another popular series, the Blandings Saga, which he worked on from 1915 right up until his death in 1975 when he wrote Sunset at Blandings, his last book ever written. He died before finishing it and it was published in 1977 in its incomplete form, and with an introduction by Douglas Adams.

The Blandings Saga is about Blandings Castle and its inhabitants, acquaintances and goings-on. Despite what the name suggests, the series is anything but bland, with the books being perfectly hilarious and always fast-paced. Blandings Castle is an early Tudor castle situated in Shropshire, England, two miles from the fictional town of Market Blandings. Here operates the renowned pub and inn, the Emsworth Arms, famous for its particularly palatable beer.

The gardens of Blandings Castle are that original garden from which we are all exiled. All those who know them long to return.
- Author Evelyn Waugh

Blandings Castle is run by the lovable yet scatterbrained, dithering and absent-minded Lord Emsworth. He has ten sisters, one deceased, and two younger brothers: Galahad and the deceased Lancelot, of which little is known. Emsworth has two sons: Freddie, the trouble-making younger brother, and George, aka Lord Bosham, who is the eldest and therefore heir to the Earldom. He also has a daughter, Mildred, and numerous nieces and nephews. His wife died years previously, and since then he has avoided the opposite sex as much as possible. Lord Emsworth prefers to dodge his duties and instead indulge in more pleasant activities such as pottering around the gardens and admiring his beloved sow.

The Empress of Blandings

The true joy of Lord Emsworth's life is his prize-winning Berkshire pig, the Empress of Blandings. She is a winner of the Fat Pigs Class at the Shropshire Agricultural Show, and Lord Emsworth is obsessed with her diet and well-being. His favourite book is Augustus Whipple's1On the Care of the Pig (Popgood and Grooly, thirty-five shillings).

He pores over it incessantly, savouring its golden words like artichoke leaves.

This publication maintains that a pig requires a daily intake of no less than 57,800 calories, consisting of barley meal, maize meal, linseed meal, potatoes and separated buttermilk.

Lord Emsworth's younger brother, Gally is headstrong, witty and quick thinking. However, in his younger days, Gally was often arrested for being drunk and disorderly. Bouncers fought for the privilege of throwing him out of the clubs and he was on first-name terms with many police officers, according to Gally himself in Galahad at Blandings. Though formerly a ladies' man he is a lifelong bachelor, as years before he was in love with a girl named Dolly Henderson, but his father wouldn't allow the marriage. Gally is a member of the Pelican Club and he wears a monocle, which only ever falls out of his eye when he has been surprised or greatly stirred.

Though Lord Emsworth is the official authority at Blandings Castle, much of the time it is in fact overseen by his sisters, mainly Lady Constance, who often takes charge of things. Many of Lord Emsworth's sisters are not unlike Bertie Wooster's Aunt Agatha, being generally quite austere, domineering, mean and not particularly pleasant to be around. Their names are: Lady Charlotte, Ann Warblington, Georgiana Alcester, Julia Fish, Dora Garland, Florence Moresby, Diana Phipps, Hermione Wedge, Constance Keeble2 and the deceased Jane.

Despite his dislike for them, Lord Emsworth has employed many different secretaries, such as Rupert Baxter, Ronald Psmith and Monty Bodkin. Lord Emsworth dislikes secretaries because he prefers to be disorganised and doesn't like being forced to answer letters.

In 1933, a silent film was made of Summer Lightning, with Horace Hodges starring as Lord Emsworth.

In 1967, the BBC made a six part mini-series based on short stories from Blandings Castle. Unfortunately, all but one of the episodes have been erased from the BBC archives.

In 1995, Heavy Weather was made into a TV movie starring Peter O'Toole5 as Emsworth, Richard Briers6 as Galahad and Roy Hudd7 as Beach.

Lord Emsworth and Others (1937) featured one short story about Blandings entitled Crime Wave at Blandings. Nothing Serious (1956), another short story collection, included Birth of a Salesman, while Plum Pie (1966) contained Sticky Wicket at Blandings.

1Whipple has also been referred to as 'Whiffle'.2Later remarried, with her surname becoming 'Schoonmaker'.3Richard Vernon played Slartibartfast is the Hitchhiker's Guide to the Galaxy radio and television series. He also played the irritable man sharing a train compartment with the Beatles in the movie A Hard Day's Night. He was also on the television series Yes, Minister.4Ian Carmichael earlier had played Bertie Wooster in the television series The World of Wooster.5Peter O'Toole is famous for playing Lawrence of Arabia in the movie of the same name.6Richard Briers also played Bertie Wooster in the radio series Right Ho, Jeeves.7Roy Hudd played Max Quordlepleen, the host at Milliways, in the Hitchhiker radio and TV series.