Yes Minister - the TV Series Content from the guide to life, the universe and everything 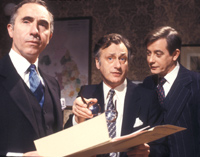 In 1980, the British political sitcom, Yes Minister aired for the first time on BBC2. James (Jim) Hacker's party1 had returned to power in Parliament and Jim, being a leading member of the party, was awaiting the call to join the Cabinet. It came and he was appointed Minister for Administrative Affairs. At the Department, he and his political adviser Frank2 meet Sir Humphrey Appleby, Permanent Secretary at the DAA3 and Bernard Woolley, Principal Private Secretary to Jim Hacker.

The Things That Made It Special...

I don't make decisions, other people do that for me.

During the series, it is often said that Jim is in politics and Sir Humphrey4 is in government and because of this the pair often clash. Both claim to want what is good for the country, Sir Humphrey being driven by partisan politics involving the Civil Service while Jim, though occasionally idealistic5, tends to want to do what is popular in the country. Although conflict is the norm between them, Jim and Sir Humphrey are not always at loggerheads, as sometimes it becomes necessary for them to band together against an outside force - such as another department or a Select Committee investigation.

Usually though, to achieve their respective goals, the two often double-cross and trick each other, using press leaks and visiting people who can help them without the other's knowledge. Bernard is the one caught in the middle, watching the two connive and plan, while making his own humorous asides.

Other appealing characteristics of the show are Jim's infrequent lapses into a Churchillian tone at inappropriate times6 and his apparent need to always be in the papers to bolster his belief in his own importance.

Sir Humphrey often used to get around others that didn't agree with him by confusing them with, frankly, mind-boggling sentences. For example, when someone mentions that they voiced an opposition to something Hacker bought up in the last Cabinet meeting, but it does not appear in the minutes, Sir Humphrey said:

Confused? That was the point. If no-one could understand him, they couldn't possibly argue with him.

The majority of episodes ended with the line 'Yes, Minister8' in response to something said by Jim. Sometimes a variation on the phrase would be used, such as in the episide 'A Diplomatic Incident', where Sir Humphrey responded with 'Mais oui, Prime Minister' because Jim had just clinched a deal over the Eurotunnel with the French President.

Nearly two years after the third (1982) series of Yes Minister ended, a one-hour Christmas Special was broadcast on BBC2, in which Jim Hacker came to Number 109 on a wave of popular support after saving the British sausage from bureaucrats in Brussels. The episode also saw Sir Humphrey become Cabinet Secretary10. The Christmas special spawned a new series, Yes, Prime Minister, which ran for two series, before ending in 1986.

The best way to describe Yes Minister and all the complex trickery/ideas that are in the series is to outline one of the episodes. So here goes. This is the basic plot of 'The Quality of Life' from the second series of Yes Minister:

The episode starts with Sir Desmond Glazebrook, a city banker, discussing his proposed new skyscraper with Sir Humphrey. Glazebrook wishes to add an extra six storeys to the building, but Hacker is opposed to the plan. Glazebrook reminds Humphrey that if they can't build those extra storeys, where will Humphrey's offices be when he joins the board of directors at the bank? A temporary 'prefab' office in the car park!? Humphrey understands this, but says that in order to change the Minister's mind about the plan, he must first agree with him totally.

A meeting is held in Hacker's office between Glazebrook, the architect of the building, Sir Humphrey, Bernard and Hacker. Hacker states that he will block the bank's plans, Humphrey points out that there is a vacant site, perfect for the new skyscraper, only 400 yards away. 'It would be hard for the directors to walk there for lunch... and impossible to walk back afterwards,' says Glazebrook. Besides which, it is scheduled for 'Phase Three'. The meeting ends with Hacker reiterating that he will block any plans for the new building, but they can submit the application if they wish. Then he heads off to a city farm for a photo opportunity, but not before signing an Administrative Order to utilise unused local authority land, little realising what it is.

At the city farm Hacker is tricked by the manager of the farm into stating on television that he will save the farm from imminent closure. Meanwhile, Humphrey is handing the executive order just signed by Hacker over to the Treasury Secretary, meaning that the Treasury can use the land for Inland Revenue car parking. Of course, the city farm and the 'unused land' are one and the same.

Back in Jim's office, the story over the tax inspectors' parking has leaked to the press11 and the manager of the farm bursts in and calls him a Judas. 'My husband is features editor of the Express and by tomorrow morning your name will be manure,' she says and storms out. Horrified at the thought he could be out of office very quickly, Hacker is saved by Glazebrook coming in and announcing that if was allowed to add an extra nine storeys to the building, as opposed to the proposed six, the Phase Three site would be left vacant and the city farm could be moved there. Unknown to Jim, Sir Humphrey has been colluding with Glazebrook to come up with this plan. Naturally Hacker jumps at the chance to save his image and all is well again, isn't it? 'Yes, Minister'.

Born in London on 18 June, 1927, Eddington was mainly a stage actor until he achieved success on TV as Jerry Leadbetter in The Good Life. Yes Minister bought him TV stardom and international recognition as Cabinet Minister James (Jim) Hacker. It was for this he received a CBE12 from Margaret Thatcher. He once remarked that 'People abroad tended to play safe and treat me as a minister, just in case'. After the series ended, he went back to the theatre and continued to appear on TV as well until he died in 1995 from skin cancer.

Born in Coventry on 5 April, 1929, Hawthorne had been a very successful theatrical actor before Yes Minister throughout the two decades preceding the series. However, Yes Minister brought him to prominence and he won BAFTAs and Tonys (and was nominated for an Oscar) for later performances, including the film The Madness of King George, originally a stage production13. Like Eddington, he was made a CBE for his work on Yes Minister, and his subsequent theatre work was rewarded with a knighthood in 1999. He died of a heart attack on Boxing Day 2001 after suffering from cancer for 18 months.

Born 2 September, 1937, Fowlds had previously been seen in many TV, film and stage productions, probably most noticeably as Mr Derek, the human sidekick to children television favourite Basil Brush. His latest main role is in the nostalgic rural drama series Heartbeat, as Sgt Blaketon.

Writers Antony Jay and Jonathan Lynn met while working for John Cleese's video production company. In addition to Yes Minister, Jay has writen a number of bestselling books including Management and Machiavelli (1967) and The Oxford Dictionary of Political Quotations (1996) in addition to a series of books based on Yes Minister that were co-written with Lynn. He has also produced documentaries and business training films.

In the mid-1960s, Jonathan Lynn joined the Cambridge Circus satirical revue and appeared as a comic actor on-stage in London and New York. He had occasional roles on British television before progressing onto directing theatre in London's West End, for the Royal Shakespeare Company and occasionally on Broadway. He started writing in 1974, when he produced his first screenplay, The Internecine Project. Then, in 1985, while Yes Prime Minister was still showing, he directed the film Clue based on the game Cluedo. Its all-star cast reached a memorable finale in one of three separate endings depicting different deductions of the mystery. After Yes Prime Minister ended in 1987, Lynn directed a number of Hollywood films including My Cousin Vinnie (1994), Sgt Bilko (1996) and The Whole Nine Yards (2000).

Its closely observed portrayal of what goes on in the corridors of power has given me hours of pure joy.
Margaret Thatcher, Prime Minister of Great Britain and Northern Ireland, 1979 - 1990

Baroness Thatcher liked the series so much that, on 20 January, 1984, a four-minute sketch was aired during the National Viewers and Listeners Awards featuring herself as the Prime Minister alongside Jim Hacker and Sir Humphrey. Seriously, here is the Thatcher Script.

As the series drew to a close, fans could still enjoy Thacker's pearls of wisdom courtesy of the release of a book that covered the plot of all the episodes. Written in the style of Jim Hacker's diary entries with additional material from Sir Bernard Wooley and Sir Humphrey, as well as government papers released under the 30 year rule, it contained information on what happened to Hacker's proposed 'Freedom of Information Bill' as well as cartoons and press cuttings from all the major papers.

In 2001 an Indian version of Yes Minister was launched, called Ji Mantriji. Certain references were changed (ie, Russia was changed to Pakistan, cricket to football) but it was still a satire on bureaucracy.

1The party Hacker belongs to is never named.2Who 'mysteriously disappeared' after the first series - courtesy of a bribe from Jim to accept a a high-paying job on a QUANGO.3Department of Administrative Affairs, the full name of Hacker's new department. The DAA is completely fictitious and was probably chosen so that the writers could cover the broadest possible number of comic situations. One week it would be industry, the next hospitals.4Or 'Humpy'/'Old Humpy' as Jim called him on occasion.5This idealism probably stems from Jim being a former editor of the magazine Reform - a fictional publication invented for the series.6Suggesting he has delusions of grandeur.7From 'Man Overboard'.8Or 'Yes, Prime Minister' in the later series.910 Downing Street, official London residence of the British Prime Minister.10Pretty much top of the civil service hierarchy, except for 'Head of the Civil Service'.11Now, who could have arranged that...?12Commander of the British Empire.13The stage production was called The Madness of George III.