Dinosaurs - An Introduction Content from the guide to life, the universe and everything 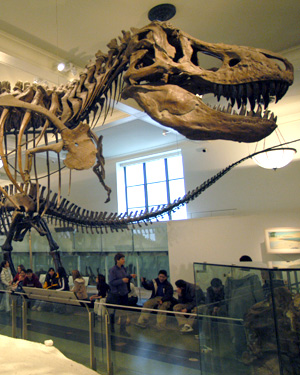 Dinosaurs1 were reptiles which evolved in the Mesozoic era - about 230 million to 65 million years ago - which is sometimes known as the 'Age of Reptiles'. We now know that dinosaurs were among the most successful creatures ever to live on the Earth, with their time lasting over a hundred million years.

We have known of the existence of dinosaurs for less than two centuries. Most people believed the Bible which stated that the Earth was created in six days, in the year 4004 BC2, so in the 19th Century the scientific world had to contend with accusations of hoaxing and making sacrilegious claims. 'Dinosaur hysteria' gripped the Victorians who could not imagine gigantic creatures had walked the Earth millions of years before humans evolved.

A major controversy still rages over whether dinosaurs were hot-blooded (endothermic - like humans and modern birds) or cold-blooded (ectothermic - like reptiles). An h2g2 Entry on the discussion, after weighing up all the known evidence, leans towards the endothermic theory.

The earliest recorded discovery of a dinosaur bone was in 1677. This was from a Megalosaurus (meaning 'great lizard') although, of course, it was not then recognised for what it was. William Buckland, who held the posts of Dean of Westminster Abbey and Professor of Geology at Oxford University, named and scientifically described Megalosaurus in 1824. In doing so he went down in history as the first man to name a dinosaur (although the term 'dinosaur' had yet to be coined).

The first dinosaur fossil to be discovered in mainland Europe was Plateosaurus (meaning 'flat lizard'), which was found in the Triassic sandstone of Southern Germany in 1837.

Sir Richard Owen is perhaps most famous for inventing the term 'Dinosauria' in 1842 to describe the first three dinosaurs to be discovered - Megalosaurus, Iguanodon, and Hylaeosaurus. He was instrumental in establishing the British Museum of Natural History, now known as the Natural History Museum.

Fossils of ichthyosaurs, plesiosaurs and complete pterodactyl skeletons have been found near Whitby in North Yorkshire.

The earliest dinosaur so far discovered was unearthed in the Andes mountain range in 1993. This was the Eoraptor, a dog-sized dinosaur, which dated back 225 million years. New species of dinosaur, like the sauropod Jobaria tiguidensis are still being discovered today. The National Geographic Society sponsors dinosaur research.

New dinosaur discoveries were given Greek names which appeared to suit their personality or appearance. They are mostly outdated now - for example the Tyrannosaurus rex was honoured with the royal monicker 'tyrant lizard king' but since it was discovered and named, other larger, meaner carnivores have been unearthed, lowering its status somewhat.

The discoverer usually gets the honour of naming the creature. It's common for them to name the creature after the country or area in which it was found, or even after themselves.

Palaeontologists (like the fictional characters Dr Alan Grant portrayed in Jurassic Park and Dr Ross Geller from the TV sit-com Friends) are specialised scientists who study fossils and bones to find out more about dinosaurs and how they lived. Palaeontologists can estimate the speed at which dinosaurs could run by studying fossilised footprints - the fastest could run at about 25mph. You can view dinosaur footprints at the Tetrapod Trackway on Valentia Island, County Kerry, Ireland.

Coprology, the study of fossilised poo (yes, it really is an 'ology'), has enabled us to discover the feeding habits of now-extinct animals. Coprolites4 (from the Greek words kopros meaning 'dung' and lithos meaning 'stone') are the end result of mineral replacement and preservation. Fossil dung from predators tells a story - they are packed with bone fragments which can be analysed. Through studying the remains we can learn exactly what foods were eaten.

Advanced therapod dinosaurs may have looked more like weird birds than giant lizards.
- Mark Norell
Palaeontologist at the American Museum of Natural History.

The first direct fossil evidence that some dinosaurs had primitive feathers (protofeathers) was uncovered by students of the Chinese Academy of Sciences in Beijing. They found the remains of an ancestor of the Tyrannosaurus rex in western Liaoning, China, where it had lived between 140 and 130 million years ago. It was subsequently named Dilong paradoxus (paradoxical emperor dragon5).

Possibly the most famous feathered dinosaur is the Archaeoraptor, described in 1999 National Geographic magazine as 'a missing link that would connect dinosaurs and birds'. The owner of an Utah dinosaur museum had paid a five-figure sum for the fossil. After investigations were completed, the magazine printed a retraction. It turned out that a Chinese farmer had cobbled together two different species and almost fooled the scientific world.

How Did Dinosaurs Die Out?

Dinosaurs became extinct around 65 million years ago, but we don't know why they died out. The most accepted theory is that a 10km-wide asteroid crashed into the Yucatan peninsula in Mexico; this would have caused catastrophic climate changes, with dust from the explosion shutting out the Sun for years, meaning the land-based dinosaurs could not survive (though many sea creatures did survive). In March 2010 the department of Earth Sciences at Imperial College London published a study supporting this theory. One report offers the theory that a lack of sleep was the cause of extinction.

Some people think it's wrong to say the dinosaurs are extinct, as birds are believed to have evolved from them. Studies at Berkeley support the theory that birds are theropod ('beast-footed') dinosaurs.

Other people say it is not impossible that dinosaurs could have existed until the present. There are cave drawings in Utah and Colorado in the US which were made between 400AD and 1300AD, apparently showing dinosaur species, supporting the theory that human beings and dinosaurs could have existed at the same time in Earth's history. Dinosaur-like creatures also appear in Roman mosaics, and gigantic behemoths and leviathans are mentioned in the Bible. Some well-informed people believe that, if the Loch Ness Monster exists, then it could be a Plesiosaur.

In 1930, the Sinclair Oil Company introduced an apatosaurus named 'Dino' as their trademark and subsequently the words Dino Gas6 began appearing on signs over Sinclair pumps throughout the US.

Modern media like to portray dinosaurs meeting humans in entertainment shows like Sliders, Doctor Who, and the cartoon series The Flintstones. Then there are the Hollywood films such as The Land That Time Forgot starring Doug McClure, which had human versus dinosaur battles, and One Million Years BC, which made a star of the fur bikini-clad Raquel Welch. An 'Age of the Dinosaurs' sequence featured in Disney's Fantasia.

The computer-generated-special-effects-laden Spielberg thriller Jurassic Park brought dinosaurs into the present by extracting partial dinosaur DNA and mixing it with amphibian DNA. The concept was so popular it spawned two sequels, with another due out in 2007. The 2005 blockbuster King Kong had the giant gorilla battling three T rexes (at the same time!) and other dinosaurs.

Experts at the Natural History Museum in London took delivery in April 2006 of ten of the most lifelike and spectacular new animatronic dinosaurs ever created. The exhibition is now over, it ran until April 2007.

Dinosaurs of The Isle of Wight

There are lots of h2g2 entries on dinosaurs of the Isle of Wight:

1The word dinosaur means 'terrible lizard' in Greek.2This is one possible reading. The traditional Jewish calendar, working from the same source, dates creation at 3761 BC.3Brontosaurus is no longer a valid name; the species is now known as Apatosaurus.4Fossilized dung.5The Chinese way of naming newly-discovered species of dinosaur is to name them after dragons.6Which, technically, would mean 'Terrible Gas', but fortunately for Sinclair the public never made this association.