Dinosaurs of the Isle of Wight Content from the guide to life, the universe and everything 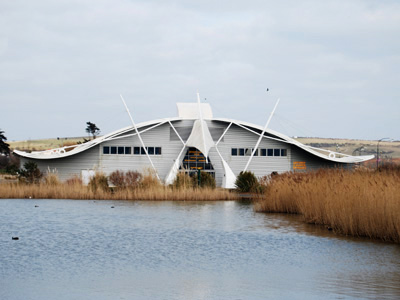 The Isle of Wight is, without doubt, the best spot for finding Dinosaur remains in Europe. No other site in Europe yields dinosaurs in such profusion. Not only were many of the earliest dinosaur discoveries in the world made on the Isle of Wight, but also Britain's largest dinosaur dig, featured in the BBC's documentary series 'Live From Dinosaur Island', took place entirely on the Isle of Wight. August 2001 saw the opening of Europe's first purpose-built Dinosaur Museum at Yaverland, 'Dinosaur Isle'. So the Island's importance in palaeontology is beyond dispute.

Although complete skeletons have been found, in many cases not enough of each remains to make an identification possible. The bones may belong to a number of different, but similar, dinosaurs. We therefore cannot know for certain whether some species have been found on the Isle of Wight. In cases like these, this lack of evidence will be discussed.

Dinosaurs unique to, or first discovered on, the Isle of Wight are shown in italic headings on the linked pages in this project.

Where Can You See Isle of Wight Dinosaurs?

If you wish to see the dinosaur remains described, but don't wish to brave the muddy cliffs and harsh outdoors for yourselves, then where can you go? The answer is simple: there are two Dinosaur Museums on the Isle of Wight. Many of the skeletons on display in the Natural History Museum (London) are from the Isle as well.

The prime place to go is Dinosaur Isle, the first purpose-built Dinosaur Museum in Europe. Built at a cost of £2,700,000, the money came from a National Lottery grant and the Isle of Wight Council. So far it has proved even more popular than anyone hoped. Almost as impressive on the outside as on the inside, the museum was built in the shape of a giant pterosaur, and is perhaps best viewed from Sandown Pier. Getting to it is easy, as it is located in Yaverland between the Boating Lake and the Zoo and Brown's Golf Course. Simply take the B3395 from Sandown, or take a 20 minute walk north along the coast from Sandown station.

If you want to arrive in proper tourist fashion, the dotto train can be taken there.

Formerly The Museum Of Isle Of Wight Geology

From then on, the collection steadily grew, most of it sadly forced into private storage as there was not enough room for display. In 1913 the geological collection was moved and displayed above Sandown Library, where, as the Museum of Isle of Wight Geology, it stayed until mid 2001.

In 1991, remains of a Brachiosaur were discovered near Brighstone on the Isle of Wight by Steve Hutt. After gaining permission from the Phillips family, the farmers who owned the land, an excavation began, with the bones being temporarily stored in the Phillips' barn. Approximately 40% of the skeleton was recovered, including an articulated shoulder and forelimb, as well as the hindlimbs and several ribs.

When news of the discovery was released, the Phillips family were besieged by visitors wanting to see the new dinosaur remains in their barn. Eventually it seemed that it was inevitable that their barn would become a museum, and after being known as the Island's Dinosaur Farm Museum has recently been renamed the Dinosaur Expedition Centre.

It is harder to get to than Dinosaur Isle, as no trains run that way, and fewer buses run to Brighstone than Sandown, but it is still accessible by car along the A3055 Military Road1.

Sadly, in the Victorian era, many of the Isle of Wight's finest dinosaur finds were removed from the Island on which they had rested for 120 million years only to become re-buried in dusty vaults beneath the Natural History Museum in London, amongst countless millions of other abandoned exhibits. Only a very small and almost insignificant percentage are on display.

The Natural History Museum was founded on the death of Sir Hans Sloane, who, in his 92 years of life, had amassed a collection 1,886 mammals 1,172 birds, 1,555 fish and 5,439 insects. On his death in 1752, he left the collection to the Nation, where it was at first stored in the British Museum, which, when it became too crowded, was then re-housed in the beautiful Natural History Museum designed by Alfred Waterhouse. Sir Richard Owen, who had been appointed Superintendent of the natural history departments of the British Museum, was instrumental behind creating the new museum, which was opened in 1881.

The most important collections of the Island's fossils was Fox's, and, as a friend of Sir Richard Owen, his collection was bought by the Natural History Museum in 1882.

Blackgang Chine is England's oldest theme park, opened in 1843 by Alexander Dabell. He felt that the beautiful crumbling coastline would make a wonderful attraction, with visitors to the chine paying, walking through a pavilion that housed the skeleton of a whale that had washed up on the coast, and seeing the magnificent landscape being eroded by the weather. Still owned by the Dabell family 160 years later, the theme park is still going from strength to strength and is considered by many to be the prime tourist attraction on the Island.

Blackgang chine is a quiet theme park, without the rides that you'd see at Chessington or Thorpe Park, and one of the prime attractions are the Dinosaurs. Although they may not be anatomically correct, Blackgang Chine's dinosaurs are well worth a visit. Ever since Sir Richard Owen commissioned Waterhouse Hawkins to create the life-size dinosaurs for the Crystal Palace Great Exhibition of 1853 - 1854, seeing dinosaurs in life-like poses has been popular, hence the success of Jurassic Park and Walking With Dinosaurs.

It has not been popular with everyone, however. Waterhouse Hawkins was asked if he would build a Dinosaur Park in New York's Central Park in 1868, yet after three years of work, his work was attacked and destroyed by William Marcy 'Boss' Tweed. Presumably, William Tweed did not like garden gnomes either.

However, if you like garden gnomes, or even if you don't, the life-size fibre-glass dinosaurs are well worth a visit, especially if you have children

Dinosaurs Of The Isle Of Wight

1Built to aid defence of the Island from a French Invasion.