The 'Golf Sale' Placard Phenomenon Content from the guide to life, the universe and everything 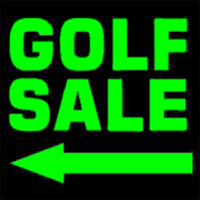 If you ask people what would make the perfect job, you'll get lots of different answers. Popular responses might include something in the leisure industry, working in the open air or having the opportunity to meet lots of people. If this sounds good to you, then perhaps you'd consider a career as a Golf Sale man1.

There really isn't anything to it. You don't even need to sell anything to anyone - just stand at your designated pitch in the shopping precinct and support a 12-foot high placard displaying the words 'Golf Sale' in fluorescent yellow and black. An arrow beneath the words indicates the direction shoppers must walk to reach the sale. What could be easier?

OK, a job where you didn't have to stand outside for eight hours at a time2 in all weathers would be easier. It might also be easier if you weren't subjected to regular abuse and ridicule3, and as for money, you'll be lucky to receive the national minimum wage in this line of work.

Of course, advertising board carriers are nothing new. Since the early 19th Century people have been walking up and down shopping streets with sandwich boards hanging over their shoulders, either advertising a local business or warning us that the end of the world is nigh. Today's Golf Sale carrier with their tall 'lollipop' sign is a different breed, though. Post holders could often be impoverished students, forced to take the job to help meet the cost of living. But that's not to say the jobs aren't valued; they are passed between friends, or sold on to others at prices of up to £100.

It is not clear when the Golf Sale trend started, but one well-known operator was using the signs in London in the 1990s. High retail rentals had forced many shops off the main thoroughfares and into the less-frequented side streets and alleyways. The pioneer may have been Andrew Wells, who owned a discount golfing equipment store in Maddox Street in London's Mayfair, but who wanted to catch the shoppers and tourists passing through Oxford Street nearby. However, his eye-catching Golf Sale signs soon attracted a crowd of similar placards - clothes shops, tanning studios, tattoo parlours - until Oxford Street started to look from a distance like the site of an angry demonstration.

The more upmarket stores were not amused. This brash advertising was having a damaging effect on the street scene. Their classy customers shouldn't have to walk past all these people brandishing large signs. They complained to the council.

We almost see it as anti-social behaviour. It doesn't add to a well-managed and aesthetically sound environment for shoppers coming to the west end.
- Jace Tyrell, of the New West End Company.

In 2002 Westminster Council took out an injunction against Wells, but it was thrown out of court, as Oxford Street's pavements were not a designated 'advertising site'. To remove the placards would require a change in the law, but this duly came in 2006, in the form of the London Local Authorities Bill. Westminster Council has now designated Oxford Street, Regent Street and Bond Street as board-free zones, and enforces the rule with vigour.

Overnight, many discount stores saw their takings fall by up to 50% - that was the value of lollipop advertising. In addition, a number of - admittedly low paid - jobs have vanished.

The time has come, the day has arrived. Let not the buyer rejoice nor the seller grieve, for wrath is upon the whole crowd.
- Ezekiel 7:12

Keeping One Step Ahead

Yet, our story doesn't end there. The Golf Sale person is alive and well, and has been sighted in many cities across the UK and beyond, where the long arm of the law is yet to collar them. One alternative piece of legislation the authorities could use is in the definition of what terms a 'sale'. Strictly speaking, items should have previously been sold at a higher price for a period of time, so you can't just declare a sale lasting for years on end. One store in Edinburgh's Princes Street cannily got around this one by changing its business name to 'The Golf Sale Ltd'.

They may not be around for ever, so enjoy the Golf Sale person while they last. Follow their trail and discover alleyways and shops you never knew existed. Buy the frozen figure a cup of coffee, or maybe engage them in conversation. Just don't walk up to them and ask 'Excuse me, do you know where the golf sale is?' They'll have heard that one before.

1Or woman, of course.2With a 30-minute lunch break.3They were a regular target for TV comedian Dom Joly, whose stunts included standing next to the person with an identical sign, but with the arrow pointing in the opposite direction.