UK School Crossing Patrol ('Lollipop' men and women) Content from the guide to life, the universe and everything 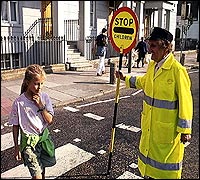 This entry is about the men and women who (increasingly) risk their lives twice each schoolday to safely escort Primary (and some Secondary) schoolchildren1 from one side of the road to the other.

The School Crossing Patrol Service was first introduced for Primary (in the UK children aged 4-11 years) schoolchildren in the UK in the 1950s. They were provided by the police, but are now employed by local councils. Even where a School Crossing Patrol is provided, parents remain responsible for ensuring their children's safety.

The sign and lights often provided near a school warn drivers approaching the site of a school crossing patrol. It's usually a standard 'Children Crossing' sign with a plate below reading 'Patrol'. When the patrol is in operation, a pair of alternately-flashing orange lights are displayed. Drivers are advised to reduce their speed upon approach for the safety of the patrol and the schoolchildren.

Some escorts have the benefit of a Pelican Crossing, or a Zebra crossing, but not all. Some schools have an attendant who operates at a Pelican crossing to control children only. These persons stay on the path. They operate without a 'lollipop' sign and have no authority to stop traffic.

The Duty of the School Crossing Patrol

Usually between 8.30am2 and 9am; and 3.20pm to 3.45pm, the Patrol stands on the pavement3 near the school and waits for children to arrive. Time should be allowed for latecomers, especially as they are more likely to take risks crossing the road. They wait for a break in traffic, then step out to the middle of the road, holding a pole with a 'Stop: Children' sign in their right hand. A new style lollipop sign now in use has the symbol for children instead of the word 'Children'. When the Patrol is waiting in the middle of the road, arms outstretched to hold up any approaching traffic, only then are children allowed to cross, in front of the Patrol. The Patrol returns to the pavement once the last child in the group has crossed safely, and repeats this action many times each session.

The lollipop sign must be displayed clearly when controlling traffic, and it is part of their duties to keep the sign clean. All vehicles should be allowed sufficient time to stop safely, especially heavy vehicles. Under conditions of ice, wet or poor visibility, more time must be allowed. When returning to the path the sign must still be held upright. On the path the sign should be upside down or turned away from traffic so that motorists are not confused.

It is the responsibility of the Patrol to care for their own uniform and keep it clean. Failure to wear the uniform of long, high-visibility (fluorescent material) coat to the latest European standard, means that a Patrol is operating illegally and may become personally responsible for any subsequent claims.

School Crossing Patrols must not:

You Can Help the Patrol by:

Drivers must stop and remain at rest when a School Crossing Patrol, wearing the approved uniform, displays the lollipop sign. Failure to do so is an offence under the Road Traffic Act 1984. This is also stated in Rule 87 of the Highway Code. Drivers can face a £1000 fine, 3 penalty points on their licence and possible disqualification for non-compliance.

This entry is dedicated to the memory of Tracy Chapman-Woods of Cleethorpes, who lost her life on 17 January, 2003 while performing her duty as a School Crossing Patrol.

1Or anyone else wishing to cross the road so long as the Patrol are operating at their approved site and within their authorised hours of duty.2Depending upon the school's time of intake.3Sidewalk.4They should dismount and walk across.