How to Use a Zebra Crossing in the UK Content from the guide to life, the universe and everything 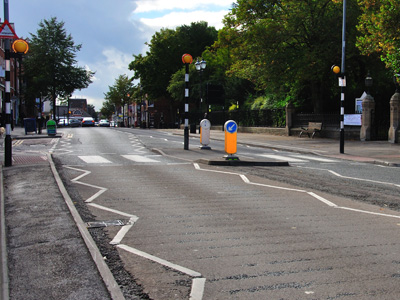 Zebra crossings are a type of pedestrian crossing. They can be found in many countries, but this entry concentrates on the rules of using one in the UK - that is where this Researcher resides, and some of the rules may vary from country to country.

How to Find a Zebra Crossing

Most people will recognise a zebra crossing when they see one. For those who have never seen a British one, they are a wide path across the road marked with black and white stripes and a line of white painted studs on each side. They also have zigzag lines along the edge of the road on both sides of the crossing, where vehicles may not park. This is so that visibility is kept to the maximum for both pedestrians and drivers, but this area is not intended to be used for crossing the road. There is usually a Belisha beacon at each side of the crossing. These have black and white striped poles, topped by bright orange globes with blinking lights inside. In dimly lit areas they also have spotlights directed at the crossing.

Some zebras are on 'speed bumps' - areas of the road that are raised to reduce the speed of traffic. These should be treated as a normal zebra crossing, being careful that young children know that although they are the same height as the pavement, they are actually the road.

How to Use a Zebra Crossing for Pedestrians

First stand at the kerb, remembering that the rules of the Green Cross Code apply at all times. Once all the traffic has stopped, then you may cross. Pedestrians have right of way over traffic once they are on the crossing.

If there is an island in the middle of the crossing, the two parts must be treated as two separate crossings. Make sure to check that traffic has stopped before you step off the island, in the same way that you did at the kerb.

If the traffic does not stop, then you can carefully put one foot on the crossing. This means that the right of way is legally yours, and the traffic must stop so that you can cross.

If a traffic warden, police officer or school crossing patrol (commonly known as a lollipop lady or man) is controlling the crossing, then wait for them to signal before you start to cross.

Remember to cross on the black and white stripes between the studs as it is dangerous to cross in the zigzag area.

How to Use a Zebra Crossing for Drivers, Motorcyclists and Cyclists

It is illegal to park on the crossing or on the zigzag lines. If you do, you face a fine and penalty points on your driving licence if you are in a motor vehicle. It is also illegal to overtake on any part of the crossing - either moving vehicles, or the closest stopped vehicle. Even if you can't see anyone on the crossing, be sure not to overtake. It's possible that a small child or wheelchair user is obscured by the car in front. If a pedestrian is already on the crossing you must give way.

In queuing traffic the crossing must be kept clear.

Cyclists should remember that they are also bound by these rules, and should only use the crossing themselves if they dismount and push their cycle.