Easter Island Content from the guide to life, the universe and everything 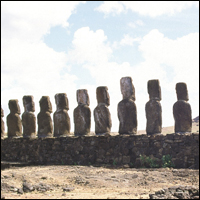 The island's official name is Isla de Pascua but it is more commonly known by its English name equivalent, Easter Island. Locally, it is known as Rapa Nui, or Te Pito o Te Henua, 'The Navel of the World'

Despite being Chilean-owned, it has a much more Polynesian feel to it than South American, which lends credence to the more popular of the Rapa Nuian origin theories that the indigenous people of the island came from Polynesia. Although Spanish is the island's official language, many of the 2000 islanders speak Rapa Nui, a Polynesian dialect which also adds weight to this argument.

Easter Island is one of the most lonely islands on the planet. The nearest populated place is Pitcairn Island some 1,900km away, which is even smaller than Easter Island's own modest 117km2. After Pitcairn Island, it is either 3,700km east to Chile, or a whopping 4,200km to Tahitain-owned Papeete.

Easter Island's capital city could really just be called a village, and is the only one on the island. Hanga Roa is a place which just begs to get lost in (which this Researcher did on several occasions) despite it being a very small town. There are a few paved roads, but many more meandering dirt tracks that lead off into the wilderness of the island. Practically all of the roads are unsigned, which makes following a map very difficult.

Hanga Ria is still a wonderful place though. It has anything but a touristy feel to it, despite the many artisan shops that have sprung up. Its coastal location and proximity to some of the best attractions are also good, although the island's tiny size means that nothing is more than a half hour drive away.

Flying is the only feasible way to Easter Island. Ships do sail there twice a year, but it is a long crossing. The only airline serving Easter Island is LanChile, with flights between two and four times per week. These flights are expensive at between £400 and £600 (at the time of writing) from Santiago de Chile in the cheapest seats, depending on when you buy them and what season you depart in.

Flying from Papeete is another option, but even costlier. Another option is to see if it can be included on a round the world itinerary or as a stopover, although this will depend on who your RTW ticket is with.

On the island itself, apart from taxis, there is no public transport, so your options are rather limited. You can hire a jeep, motorcycle, quad-bike, mountain bike or horse and tour the sites yourself, hire a taxi or take a tour. There are many operators running half- and full-day tours which take in all the highlights of the island. These range (again at the time of writing) between £20 and £45 per day or half-day, and can usually be organised through your hotel.

The main attractions of the island are the many archaeological sights scattered around the islands. All of these sights are classed as being within the Parque Nacional Rapa Nui, a UNESCO World Heritage Site since 1995, to which you must pay a US$10 (£6.50) entrance fee, valid for your stay at the island. This is collected at either Orongo Ceremonial Village or Ahu Tahai, although they often ignore this formality

The Ahu are ceremonial platforms under which kings and noblemen are buried. Huge Moai were often found erect on top of these platforms. There about 250 of these sites scattered around the coastline, on what was the site of the old villages of the island.

The Moai are the most famous residents of Easter Island, and the reason most people know the island. They are, of course, the statues of giant heads, often attached to a body and occasionally topped with an red topknot.

The Moai are statues in the likeness of the person buried beneath the Ahu upon which they stand. Once the obsidian eye (or more correctly, pupil) was added, the dead king was said to be born again inside the statue. With one exception, none of the statues have legs, 'so as to prevent the statues from walking around' we are told.

Almost all the Moai are situated on the coastline, with their backs to the sea, overlooking the villages which they once protected. The only exception being those at Ahu Akive, known as the seven travellers, which are inland looking towards the ocean and the ruins of a village.

The Moai themselves are huge and have a hypnotic quality to them. As you look at them, you cannot help but to be captivated by them, as you wonder just how they were actually moved from the quarries where they were constructed, to their current locations.

Since being constructed, warring tribes, time and the ravages of Mother Nature have all taken their toll on these leviathans, and the vast majority have been toppled and are often broken. The Chilean government has restored several of them to their former glory though, so they can once again be appreciated.

The major sights worth a visit are...

Originally, the island was covered in a lush palm forest, however this supply of lumber was readily used for construction of boats and houses, and to assist with moving the Moai. Many of the remaining trees were cleared for agriculture. This land clearance left the island much depleted of resources, and this eventually left the islanders to resort to cannibalism. It has been speculated that cannibalism was also popular before resources were scarce, as man was the only large mammal on the island, and the islanders grew a taste for human flesh!

For more information on the history of this island, visit the Unofficial Easter Island Homepage or an article by the ecologist Jared Diamond.

Accommodation on the island starts at £17 per night and is plentiful. The owners of many of the hotels and guesthouses meet the incoming flights, and clamour for your business. Prices rise and accommodation can become scarce during January, February and August. Camping is also possible on the island in designated areas.

The Chilean Peso is the official currency of the island, although many places also accept US Dollars. Banks will change US Dollars and also Travellers Cheques for exorbitant fees. Visa cash withdrawals are available over the counter, but there is no ATM on the island, although rather perversely, there is an empty ATM vestibule. It is easiest to bring money from the mainland.

Email and internet access is available on the island, provided by two cafés. Opening hours are very erratic though. When this Researcher was there, he never saw them open, so you would be advised not to depend on them.

Postal service is available for the same price as on the Chilean mainland, which is relatively cheap. It does, however, take longer to reach its destination due to the islands isolation.

Entel, one of Chile's two telecommunication companies, has a telephone office there, although calls are very expensive at about £1.75 per minute to Europe.