Making 3D Pictures Content from the guide to life, the universe and everything 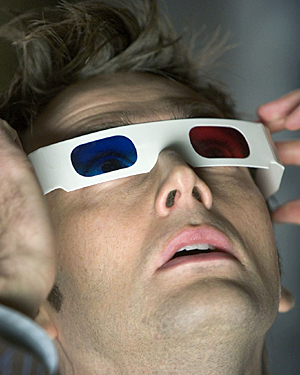 Adding a third dimension to a flat medium may seem like a hugely complicated process requiring hours of work and supercomputers, but it is possible to produce your own, static 3D photos with nothing more than a digital camera, a computer and some free software. These images are called stereograms or anaglyphs.

All you need to view these pictures is a pair of coloured glasses. While there are many different combinations of colours, red-cyan seems to be the most popular.

So, How Does it Work?

The illusion of making something look 3D relies on us having two eyes and one brain. Cover your left eye and then do the same with your right. Each view is marginally different. Objects are seen from slightly different angles and are at slightly different positions. Your brain merges these images and makes one 3D view out of them, using differences in the positions of objects to determine whether they are small or far away. This is our depth perception.

To make a 3D photo, two photos must be taken from slightly different positions, but otherwise identical. You need to fool your brain by combining the images in a such a way that each eye sees only one of the two images. The easiest way to do this is to colour one image red and the other cyan. Look at the combined image through coloured glasses, with a red filter in front of one eye and a cyan one in front of the other. The eye looking through the red filter will see only the cyan image and vice versa. Thus the two eyes get different information and the brain combines the result to make a 3D image in your head.

First you need to take the two photos. Let's assume that you haven't invested in a 3D camera1. You have two choices, the two camera method or the cha-cha-cha.

This is the easiest, and cheapest, way of doing things, but it can lead to mistakes and anaglyphs that don't work properly. All you do is take one picture and then cha-cha-cha2 to the right3 about ten to 20 centimetres and take another picture. There is a load of complicated maths about what is the precise distance apart to take the two shots, but as a rule of thumb, the distance between your eyes ('eye separation') is good enough for most applications; a larger separation may work well for landscapes.

It is vital you don't lean one way or the other, as these images do not often make good anaglyphs. Using the top of barriers or walls can help you make sure everything is level. If you have an autofocus camera, make sure that it is still focused on the same point for the second shot.

This is the ideal way to start producing anaglyphs; you can use your current camera or camera-phone and experiment. It allows you to zoom in on things and use all the features that your camera has to offer. If you are out and about with a camera and you see something that you want to anaglyph, then it is pretty simple to cha-cha-cha a pair of photos out in the course of your normal photography.

On the downside, it is a near impossibility to do anything with motion in it with the cha-cha-cha. If objects move into, out of, or across the frame, they look odd when the 3D picture is made. The rate of shooting of a compact camera means that you often can't take scenes containing people as they will often move between shots. It is just possible with a quick camera to take two pictures of an object in motion while staying still and the different angles will give an anaglyph, but it is very tricky to pull off.

Readers who are on the ball may be able to guess what is needed here is another camera. In fact, you will probably need two new cameras. The two cameras have to be identical, but, for the cost conscious among you, the best cameras to use are the simplest. Zoom and autofocus are out of the question straight away. Since both pictures need to be as similar to each other as possible, the best cameras are small simple, fixed focus cheap things. Watch out though, because even identical cameras can have slight differences. The author of this Entry has seen two identical cameras where each resets to having different default picture sizes when the batteries are changed.

Next you need to mount the cameras. The lenses need to be level and the cameras need to be both in the same plane, and about an eye separation apart. The next trick is to try and get them to fire at the same time. This can be difficult, and is not vital. Normally, the cheap cameras that are ideal for this don't work with cable or remote releases. It is possible to take the cameras apart, then fiddle with the shutter buttons so that you can use a remote control to fire both at once, but be warned this needs some level of technical skill and will void any warranty. With synchronised firing, the combined flash guns may be too strong. If you can't get them to fire exactly at the same time, you will just have to press both shutter releases at the same time.

As long as both cameras fire, pretty much nothing can go wrong. While you may not be able to experiment as much as with the cha-cha-cha, the two camera method opens up the opportunity to photograph sports, crowds, children and animals. It also makes working with a model a lot more natural as they don't have to hold exact poses while you cha-cha-cha.

Some camera manufactures have made a single lens or lens attachment that takes two pictures, horizontally separated. These are normally for fitting to SLR cameras with interchangeable lenses. They can allow the photographer to take snapshots of moving objects.

Some makes of compact camera have an on-board panoramic feature, where the image is recorded as the photographer swings around, to make one continuous panorama shot. Strictly, this is not the way to take a panorama photo, as the sweep of the shot should pivot around the camera sensor, not the photographer. Some manufactures have realised that this does allow enough horizontal separation to produce 3D images, so have added this feature to their cameras. These can't be used for moving objects4.

Yippee! I Have Photos, Now What?

Congratulations. Are you ready to make some anaglyphs to impress your friends?

We have a choice of ways of going about it. If you happen to own a copy of Photoshop, then you can use that to align the photographs, and use the layers commands to colour each one. Or if you think that that is all too complex and expensive you can just download a free anaglyph maker like Anamaker.

For the purpose of this Entry, we will assume you are using Anamaker, although the theory can be transferred to other products.

The first thing you need to decide on is what the mid-ground of your anaglyph is. Everything in front of that, in the foreground, will seem to be coming out of the screen; everything behind it will seem to recede.

Load up the two images you want to anaglyph. Remember to make sure that the left image is one from the left camera or the one before you cha-cha-cha'd. Select the type of 3D image you want to do; don't use the colour Red/Cyan mode yet, use the grey version to line things up as it is a lot clearer, and click '3D make image'. Now you need to spot a feature in the mid-ground that is obvious in both pictures. Using the buttons, you can move the images over each other until they both line up over your chosen point.

Now you can don your glasses and see if, as a full screen image, the anaglyph works. Beware: if you are not used to anaglyphs, then it can take a few moments for your eyes to get used to the glasses.

Some anaglyphs work better in colour, some in 'grey'. The biggest problem is that if a foreground object is too far away from the mid-ground, it is hard for your brain to make it into a proper image and it can very quickly give you a headache. Try finding a point closer to the foreground to use as your mid-ground.

Not Just for Those Hollywood Types

Animated movies and comic books are not the only place you will find 3D pictures. Stereoscopic images were used in some aerial reconnaissance planes in World War II. NASA and astronomers are big users of anaglyphs. Searching online can reveal a lot of 3D astronomical images. Some of the most interesting are those from the Mars Pathfinder rover; it had two cameras, which allowed it to make clear images of all the ridges in the Martian landscape.

Not everybody is able to see anaglyphs, even if they have two working eyes. There can be a number of underlying reasons for this and a trip to the optician can normally identify the problem.

There are many ways of tricking a brain into thinking an object is in 3D. Two-photo anaglyphs are some of the most effective, but there is a fun trick you can do with one photo to make it look 3D. You add a frame inside the photo and make it look like an object is poking out from the frame. Unfortunately, this method will need some graphic package like Photoshop. This effect works best on photos where something is obviously a three dimensional object, like a person walking towards the camera, or a train or car.

We shall avoid a complex tutorial, but the basic idea is to put a frame in perspective into the picture, around most of the object that you want to look like is jutting out. The bit that you want to jut out, like the nose of a plane, has to lie outside the frame. Everything outside the frame is masked out. You then mask in the jutting out bit of your object, and remove the bit of the frame that overlaps the object. Lastly, and possibly most importantly, you add in some shadows; this brings the whole scene to life.

You can use this effect to make it seem like people are reaching out of photographs or birds are flying out of posters.

1If you have, your knowledge may well be beyond this introductory Entry.2Shuffle.3Or the left, but decide on one way and stick to it, it makes things a lot easier later.4Despite advertising images suggesting they can.