Smiling Content from the guide to life, the universe and everything 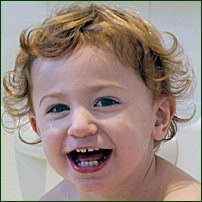 Smiles brighten up our days, and their forms are manifold. They are important in the arts, literature, and music. A very well-known example in literature certainly is the Cheshire Cat from Alice in Wonderland by Lewis Carroll. Probably the most discussed smile in art is that of the Mona Lisa: is the smile as enigmatic as many claim or did she suffer from bruxism1, as the Italian doctor, Dr Filippo Surano suggested in 1999? The most popular 'smile' for Internet users worldwide is certainly the simple smiley. It is an emoticon, used to express the writer's feelings in absence of the body language we rely on in a face to face conversation.

Today, there are thousands of variations to express different emotions, but they're all derived from 'the' Smiley2 - a bright yellow button with two black dots and a black half-circle pointing upwards, representing the eyes and the mouth. The usual code for it is either :-) or :). This smiley was allegedly created by the American Harvey Ball in 1963, as a logo for an insurance company. It would take until the early 1970s for this smiley to be marketed and make some people millionaires. Companies still use some form of smiley or smile as a logo or slogan to indicate that their services or products are customer-friendly.

What is it about a smile that it makes people so attractive, usually causing a similar reaction in those we're smiling at? Why do photographers insist that you should smile, often by asking you to say 'cheese'? Why is it that a face showing lots of smile-wrinkles3 is thought to be a sympathetic face?

A smile is the shortest distance between people.
It doesn't cost anything, yet it gains so much.
It makes the addressee richer without making the donator poorer.
It's as fast as a flash, but the memory of it is often everlasting.
Nobody is rich enough to do without.
Nobody is too poor to afford it.
It brings luck to the home and is a token of friendship.
It means recuperation for the tired,
Encouragement for the fainthearted,
Cheering-up for the sad,
And is the best means against annoyance.
You can neither buy it nor request it,
Neither borrow it nor steal it,
Because it gets its value only when it is given away.
There's nobody so much in need of a smile
Like the one who doesn't have a smile to spare himself.
-Anon

The ability to smile (among others) distinguishes humans from animals; not even the great apes with whom we share a lot of features can smile consciously. An animal showing its teeth may give the impression of smiling, but this usually is meant as a threat or as a sign of submission. Humans showing a broad smile or a grin often expose their teeth (and risk showing poor teeth and/or what they ate for dinner at the same time). 'To show one's teeth', though, is an idiom for becoming hostile or threatening, just like in the animal world. It is said that a smile can't be learnt. Researches found that a smile is a natural reaction to certain situations throughout all cultures and that it is the most commonly used facial expression. A human baby is born with the ability of a whole range of (not only) facial expressions to express how it is feeling. Most parents eagerly wait for the first smile of their newborn. Some may even have been lucky and caught a glimpse of their baby smiling in the womb during an ultrasound scan. We can distinguish between three different sorts of smile:

This is what it says on the tin: a mere reflex to stimulation like tickling, stroking and voices. Most often, it will be the higher-pitched, loving voice of the mother that will cause the newborn to smile. This reflex requires that a myelin sheath4 has been built around the required nerve tracts. Because of its nature, the smile can have a startled or even anxious quality, depending on the stimulus.

This smile will often occur during the fourth or fifth week after birth. It can be considered as a welcome, as the newborn is now able to differentiate between a stern or a smiling face. Although still mostly a reaction to the parents' voices or smiling faces, it can also be a reaction to any friendly, sympathetic face, hence we're talking about a general or 'unspecific' smile. Gradually, because of the feedback this repeated smiling usually creates, the baby's smile will become broader and will last longer.

This smile occurs from when the baby is aged between five and seven months. Like every genuine smile, it is also known as the Duchenne smile5'. It is reserved for a few select people such as parents, older siblings or people who are in close and regular contact with the baby. It is a conscious smile which is given to the baby's favourite persons. As the smile is congenital, even blind babies smile, but these smiles aren't as distinct as those from babies who are not blind, because they can't see the feedback. The response to the baby's smile is essential for the bond between the baby and the caring persons. It is said that babies of depressive mothers will have more problems emotionally than other babies. A baby's smile is still candid, as it hasn't yet learnt to use it for, say, diplomatic reasons. Psychologists have researched the reason why the smiles of babies are so irresistible, and have offered the following explanation: a baby's smile is so irresistible because that's the only means of the baby to keep the loved person for a while longer, a bit like pulling their sleeve.

There are many attributes allocated to a smile, though not all of them are positive. Below is a list of the most common types of smile.

...To name but a few. Phrases/idioms around the smile include the following:

A smile is said not only to change the facial expression, but causes the brain to produce endorphins which lower physical and psychological pain as well as the stress hormone corticotropin, and increases general well-being. The effect is used as the basis of 'smile therapy' for sad and/or depressed people. A genuine6 smile can break the ice; it can give comfort and warmth and is generally believed to denote friendliness. The first impression people will get of you may well depend on whether or not you're smiling.

It's not only the smiling person who profits from smiling, as a recent study demonstrated. In many cases, the recipient will smile back, hence profiting from the aforementioned benefits. Smiling is contagious. Even looking at a photo of friends or family smiling at you works - go and try this, you'll inadvertently smile back!

How many muscles does it take to produce a smile? Opinions on this vary greatly; some say it only needs two pairs of muscles - one pair for the contraction and one to expand. The general consensus seems to be that you use at least 17 muscles for a smile, but more than 40 for a frown. Whatever the exact number, it is much easier to smile than to frown, so go and say 'cheese'.

1An unconscious habit of excessive tooth grinding, usually while asleep, which can result in an aching jaw.2The name as well as the logo are trademarked in over 100 countries.3These only come when the smiles are genuine, involving the cheeks and the area around the eyes.4Myelin is a white fatty material, composed chiefly of lipids and lipoproteins, that encloses certain axons and nerve fibres. The insulating envelope of myelin that surrounds the core of a nerve fibre or axon and facilitates the transmission of nerve impulses is known as a myelin sheath.5Called after the French neurologist Guillaume Duchenne who not only identified the muscles involved in smiling, but also those activated due to several nerve and muscle dysfunctions.6A look at the eyes is a good indicator to tell whether a smile is genuine or fake, as only a genuine smile will reach the eyes.