The History of Teeth Cleaning Content from the guide to life, the universe and everything 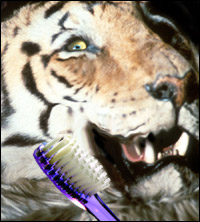 We do it every day; usually twice a day or more. It is part of our normal routine and few of us probably ever give a thought to brushing our teeth using brush and toothpaste. When did all this personal oral hygiene start?

The activity of keeping one's mouth clean dates back as far as records exist.

As long ago as 5000 BC the Egyptians were making a tooth powder consisting of powdered ashes of ox hooves, myrrh, powdered and burnt eggshells, and pumice. Directions are given about relative quantities that should be mixed, but no instructions are available about how this powder was used. It is assumed that it was rubbed onto the teeth using the fingers, as the toothstick - the forerunner to the toothbrush - was not in use at that time.

The Greeks, and then the Romans, improved the recipes for toothpaste by adding abrasives such as crushed bones and oyster shells, which were used to clean debris from teeth. The Romans added powdered charcoal, powdered bark and more flavouring agents to improve the breath.

Few records related to toothpaste or powder then exist, until around 1000 AD when the Persians wrote to advise their people to be wary of the dangers1 of using hard abrasives as toothpowders. It was recommended that people used burnt hartshorn, the burnt shells of snails and burnt gypsum. Other Persian recipes involved dried animal parts2, herbs, honey and minerals. One recipe to strengthen teeth includes green lead, verdigris, incense, honey and powdered flintstone.

There is then another huge gap in the history of toothpaste until the 18th Century, when toothpowder, or dentifrice, became available in Britain. These powders were developed by doctors, dentists and chemists and included substances very abrasive to teeth, such as brick dust, crushed china, earthenware and cuttlefish. Bicarbonate of soda was used as the basis for most toothpowders, and some contained other ingredients that would not be considered appropriate today, such as sugar. Borax powder was added at the end of the 18th Century to produce a favourable foaming effect. The rich applied toothpowder with a brush. The poor cleaned their teeth with bicarbonate of soda, using their fingers.

Glycerine was added early in the 19th Century to make the powders into a paste and more palatable3. Strontium was introduced at this time as well, which serves to strengthen teeth and reduce sensitivity. A dentist called Peabody became the first person to add soap to toothpowder in 1824 and chalk was added in the 1850s by John Harris.

In 1873, toothpaste was first mass-produced. It was in a jar and it smelt good for the first time. In 1892, Dr Washington Sheffield of Connecticut was the first to put toothpaste into a collapsible tube: Dr Sheffield's Creme Dentifrice. Sheffield's company was to become Colgate. Despite the manufacture and marketing of toothpaste being led by the Americans, they themselves did not become regular brushers until after the Second World War, when returning GIs brought the habit home from Europe.

As a result, after the Second World War there were great advances in the development of toothpaste. Synthetic detergents replaced the soap with emulsifying agents, such as sodium lauryl sulphate. This was soon followed by the discovery that the addition of fluoride and fluoride compounds to toothpaste would strengthen tooth enamel against decay.

The toothbrush seems to have its origins in the chewing sticks of Babylonia as early as 3500 BC. Ancient Greek and Roman literature discusses the use of toothpicks, which were used to keep the mouth clean.

Over the years the toothpick evolved into a chewstick, which was the size of a pencil. Records from China around 1600 BC show that one end was chewed until it became brushlike, the other end was pointed and used as a toothpick. The twigs used for this purpose were from aromatic trees and therefore freshened the mouth, as well as cleaning it.

The first bristled toothbrush also originates from China at around the same time and was brought back to Europe by traders. It was made from hairs from the neck of the Siberian wild boar, which were fixed to a bamboo or bone handle. In Europe, where very few people brushed their teeth, it was found that wild boar hairs were too stiff and made the gums bleed, so horse hair, which was softer, was used instead. It was still more customary in Europe to use a toothpick after meals, made of a goose feather, silver or copper.

Around 1780, William Addis of Clerkenald, England, made his first toothbrush and in the 19th Century his descendants developed and mass-manufactured fine toothbrushes. The handles were carved out of cattle bones and the bristles were made from wild boar or horse hair. These toothbrushes were in general use in Europe by the early 1800s. In 1857, America entered the toothbrush market when H. N. Wadsworth was awarded the first patent in America for their production.

In 1937, nylon was invented by Wallace H Carothers in the Du Pont Laboratories in the USA and it was first applied to the toothbrush in 1938: Dr West's miracle toothbrush with nylon bristles4.

Next time you're doing your regular daily oral cleansing, just think there were ancient Egyptians doing more or less the same thing thousands of years ago.

1Presumably to the teeth.2Unspecified parts.3Although toothpowder can still be bought today.4This was good news for the Siberian wild boar.