Derek Griffiths - Entertainer Content from the guide to life, the universe and everything 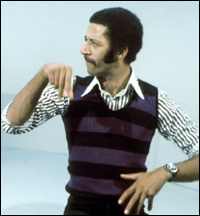 Derek Griffiths is a living God to any British person born between 1965 and 1975 (and quite a few others besides). This is because a nation's entire childhood consisted of children's television programmes that Derek Griffiths was involved in. Just a few of these are listed below. His chief charms were his endearing personality, relaxed presentation style, outstanding musical abilities - singing, scatting or playing an instrument (who could ever forget his musical characterisations in Bod, for example?) and his gentle comic touch.

Derek was born in Woking, England in 1946. He has been a regular face on British television for more than three decades (at the time of writing), as well as being a well-respected theatre actor and musician. Just some of his many achievements are listed here.

He also appeared in Rock Follies in The Group and was a children's ITV presenter in its first year (1983).

He also does the voices for the current jamjar.com adverts (again, at the time of writing). In the past he has won the Italian advertising Oscar for a series of comedy commercials.

Derek Griffiths has appeared in a variety of films over the past 30 years, usually in a minor character part. These films include:

He has most recently been seen in Fierce Creatures as Garry Ungulates.

Derek has also performed extensively in theatre including Beauty and the Beast (as Lumiere), Miss Saigon, and in 1999 he won Best Actor Award for his performance in Noel Coward's Nude With Violin. He was Inspector Truscott in a 2001 version of Loot at the Royal Exchange, and appeared in Croak, Croak, Croak at the Old Vic in Bristol during October 2000. He has also appeared on the West End and for the Royal Shakespeare Company.

In 1979 he co-adapted a musical version of The Three Musketeers at The Royal Exchange (with Braham Murray) from the novel by Alexandre Dumas, for which he did the music and lyrics.