Floella Benjamin - Activist, Actress and Producer Content from the guide to life, the universe and everything 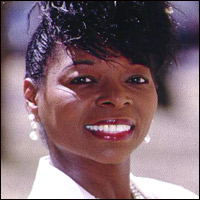 I love working with children. It's particularly gratifying because I feel I'm able to communicate with children of all kinds.

Floella1 Benjamin is best known for appearing in the children's programmes Playschool and Playaway, but she has produced many more and is an ambassador for children everywhere. She loves flowers and regularly visits the annual Chelsea Flower Show. During an interview carried out by the BBC with her and her friend Lesley Joseph at the show in 2008, she said that she adored the place and liked the gardens created by children. Lesley said: 'You are just an old kid', to which Floella replied: 'I know'.

Born into a family blessed with six children in Pointe-à-Pierre, Trinidad on 23 September, 1949, Benjamin2 came to live in Beckenham, South London, in 1960 - reuniting with her parents who had left their country several years earlier. In her words, she found England 'cold, unwelcoming, violent and bleak'. She suffered racist remarks, and when the budding athlete won a sports award at school, she was not allowed to take it home due to the social attitudes of the time.

Despite this, and with her mother's encouragement, Benjamin was determined and passionate about having an education and saw it as her 'passport to life'. She wanted to be a teacher, but her parents could not afford for her to stay on and do her 'A' levels, so she left school at 16 and spent three years working for a bank. Eventually, she raised enough money to do her 'A' levels at night school, and passed her banking diploma with the intent of becoming the first black female bank manager. However, realising that dream would not be likely to come true, she auditioned for a part in a touring musical called Hair and got it. It was during this time that she met her husband Keith Taylor, whom she now lives with in London together with their son and daughter, Aston and Alvina.

Through The Square Window

Benjamin went on to get several parts in a variety of musicals including Jesus Christ Superstar and the Black Mikado. However, she was keen to break into television and made her debut as a prisoner in Within These Walls, which ran from 1973 to 1978. More dramas followed and in 1976 she auditioned for the presenter role in Playschool, and got the part. Benjamin's beaded hair became her trademark. During the programme she introduced children to Humpty, Jemima, Big and Little Ted, and Hamble3. Benjamin was the first children's television presenter to appear on her show pregnant. Playaway followed Playschool and Benjamin dressed up as a whole range of characters - from queens to witches - alongside well-known actors such as Brian Cant, Tony Robinson, Anita Dobson and Griff Rhys-Jones.

In 1977, a film called Black Joy was released featuring Benjamin alongside Norman Beaton and Paul Medford. The play was about a boy coming to live in a big city and learning to fend for himself. It was released at the Cannes Film Festival and was the first British entry ever to appear there. By this time Benjamin had become recognisable by her beaded hair, and was not best pleased when one photographer tugged at it when she walked down the red carpet.

Benjamin has since gone on to appear in Rendition as a CIA agent, and took on the role of Thandie Newton's mother in the film Run Fat Boy Run directed by David Schwimmer4. Benjamin also likes to sing, and she performs with the author Ken Follett's band.

In 1987, Benjamin set up her own film company and was commissioned by Channel Four to write a children's programme called The Tree House. The programme was a huge success and featured people such as Bill Oddie, Rick Wakeman, Roger McGough and Linda Bellingham. Since then the company has moved on to create other programmes for different places around the world, including Cuba, Barbados, Trinidad and Jamaica. She has also produced Jamboree, Hullaballoo and an adaptation of her autobiography Coming to England. The range of programmes she has created does not stop at children's television though. Benjamin has proved herself to be a good cook in programmes such as: A Taste of Barbados, Caribbean Light and Caribbean Kitchen.

Benjamin has long been an advocate for children and represented them on the British Government's Millennium Commission. She has been involved in raising awareness for a variety of causes such as NCH Action for Children, the Sickle Cell Society and Barnardo's. Her fundraising entails running marathons - in a press interview after her 10th marathon Benjamin said:

This has been my biggest challenge ever. It was a moment of madness when I promised to run ten marathons for Barnardo's, but I always keep my promise no matter what it takes. Last year's marathon was the toughest yet, I went over on my ankle nine miles into the race, it was hell but I kept going – it felt like running in the desert on one leg.

Although Benjamin has now completed the ten marathons she promised to do for Barnardo's, she has no plans of quitting running just yet, setting herself the goal of running the New York marathon in 2009 in conjunction with her 60th birthday.

I recommend running to all women over 50 – it's a great way to keep fit and have a firm body. It also stimulates the mind – a wonderful way to get some 'me time', as you are free from communication. When running, I think up ideas for programmes and can write some great speeches in my head. The only problem is, I can't remember them when I get home!

In 2001 Benjamin was honoured with an OBE for her broadcasting and charity work, and was presented with a Children's BAFTA Special Award in 2004. She has acted as Chairman for the BAFTA organisation, and been a Governor of the National Film and Television School.

In 2007, Ofcom reported a drop in the number of children's television programmes made in Britain, bringing into question the future of this kind of programme. Floella Benjamin spoke up in favour of creating more homegrown TV programmes for children saying: We don't want our children to grow up with American accents, we want them to learn about the culture and diversity around them.

1'Flo' being short for 'flower' and 'Ella' meaning 'best of all'.2Prior to arriving in England her surname was spelled Benjamiyn.3Poppy later replaced Hamble.4Famous for his character 'Dr Ross Geller' in the American sitcom Friends.