Bernard Cribbins - Actor Content from the guide to life, the universe and everything 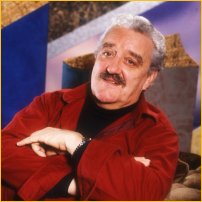 If you had the good fortune to be born in the mid to late 1960s, and the even better fortune to have been born in Great Britain, you will have spent a certain amount of your childhood in the company of Bernard Cribbins.

For a generation of Brits, Bernard was the voice of The Wombles and the Public Safety Campaign character 'Tufty'1. He remained a staple of children's television through the 1970s and 1980s but he was already an established film actor, among other things.

Bernard was born on 1 January, 1928, in Oldham, Lancashire. He must have chosen his career path early on because at the age of 14 he joined the Oldham Repertory Theatre company. He stayed there for eight years, pausing only to do his National Service2 with the Parachute Regiment. The now-former Para then went on to more rep work in Manchester, Liverpool and Hornchurch.

As anyone involved in Repertory Theatre will know, when you start out you do so at the bottom of the heap and eventually move on through every job in the theatre. The usual starting point is Assistant Stage Manager, which is essentially a dogsbody role doing anything and everything the Stage Manager can find for you to do. One such task is the procurement of props and on one notable occasion he was asked to find a goat.

There was a farm on the moors above Oldham and, more by luck than design, I managed to borrow a goat and I used to have to bring it to the theatre by bus...I'd ask for one and a goat to Rose Bank, which was the nearest stop to the theatre

Time served in rep is often seen as an actor's apprenticeship, leaving the actor ready for almost anything. In Bernard's case it was clearly a great start because he moved on to other locations and other media.

Star of Stage and Screen

If you were asked to pick a single word to describe the stage and screen career of Bernard Cribbins it would have to be 'versatile.' In 1956 he made his first West End appearance playing the two Gromios in the Shakespeare play A Comedy of Errors. He followed this with several more leading roles and, also appearing in the original West End run of the farce Run for your Wife. He played Nathan Detroit in the National Theatre's production of Guys and Dolls. In the USA he played Doolittle3 in My Fair Lady at the Houston Opera House. He has appeared in more pantomime than can possibly be healthy for a person. He also sings.

In fact, Bernard has had three top ten hits. He co-starred in a West End revue called And Another Thing, from which he released 'Folk Song' in 1960. He then kept the world waiting until 1962 for another release, at which point he spoilt his public rotten with two hits in the same year. The writing partnership of Ted Dicks and Myles Rudge, in combination with the vocal talents of Mr Cribbins, created 'Hole in the Ground' (which reached number nine in the NME4 charts) and 'Right Said Fred'5 which topped out at number 10.

By this point he had already begun a film career. In 1957 he turned up as a Sonar Operator (uncredited) in Yangtse Incident: The Story of HMS Amethyst. By the mid-sixties he was appearing in more prominent roles, including Mouse on the Moon in which he appeared with such luminaries as Margaret Rutherford and Ron Moody. He entered the pantheon of Carry On stars in 1964 when he landed a leading role in Carry on Jack (as Albert Poopdecker) and Agent Ooooh! in Carry On Spying. He then went on to join the ever-expanding list of British thespians associated with Doctor Who6 with a role in the movie Daleks: Invasion Earth 2150 AD and the following year managed to associate himself with the Bond franchise by appearing in Casino Royale.
He's probably most famous, though, for his role as Albert Perks in 1970's The Railway Children. Directed by Lionel Jeffries, the movie is an unashamed piece of feel-good sentimentality which Cribbins contributes to in no small way.

Looking at his career, it seems as though not a week went by in the 1970s and 1980s without Bernard turning up on the television. He was, as has already been mentioned, the narrator for all sixty episodes of The Wombles, but he eclipsed this with a titanic 111 appearances on that bastion of BBC Children's TV, Jackanory.

He remained active in TV for grown-ups too, landing a supporting role in the short-lived series The Shillingbury Tales, in which he played a semi-tramp with hints of a heart of gold, called Cuffy. In 1983 Cuffy became a series in its own right although it didn't last for long. Ever in-demand, he continued to appear on stage and screen and was cast in JB Priestly's When We Are Married alongside a list of actors that genuinely appears to be a 'Who's Who' of Really Good British Actors (the production features Timothy West, Prunella Scales, Patricia Routledge, Joss Ackland and Peter Vaughn to name but a few). He also made regular appearances on Noel's House Party7 Most recently, 2003 saw Bernard make appearances in the legendary British soap opera Coronation Street

If you asked what Bernard Cribbins does, the answer would have to be 'he works.' In a profession where the majority of his peers are unemployed Bernard Cribbins's career has to be seen as rather special. He has been able to turn his hand to any opportunity that's come his way, from drama to musical comedy, and do it well. If you are unfamiliar with this actor's work, take the next opportunity to see him in action. You won't be disappointed.

1The Tufty Club, promoted through those films, aimed to teach children the basics of road safety.2This was a period of military service required of British males at the age of 18 - the system was abandoned in 1963.3Eliza Doolittle's father.4The New Musical Express a music trade paper, published weekly in the UK. It has been an important part of the British music industry since the 1950s.5The band Right Said Fred took their name from this song. They're very popular in Germany at the moment.6Everyone who works on British TV has appeared in Doctor Who at some point, and now the series is to return there's no escape for the current crop of stars either.7This was a programme that blurred the line between light comedy and game show and became famous for regularly covering members of the public and various minor celebrities in brightly coloured goo.