'Hole in the Ground' and 'Right Said Fred': Two of the Hits of Bernard Cribbins Content from the guide to life, the universe and everything 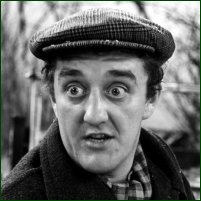 The music industry has a habit of spawning what it refers to as 'novelty hits' - songs that deviate from the usual pop formula and usually grant the performing artist an all-too-brief run at the top of the charts before the song and artist fade into obscurity. Rarely does a novelty act get a second success; Bernard Cribbins and the writing partnership of Ted Dicks and Myles Rudge demonstrated that following one novelty hit with another is perfectly possible.

...is something to be, as John Lennon pointed out. One of the reasons that the initial success of 'Hole in the Ground' could be repeated with 'Right Said Fred1' was that they shared a similar origin point: the Struggle of the Ordinary Working Bloke. In the mid-1960s the popular image Britain had of itself was legions of working class chaps happily tramping off to power the mighty engine of Industry. The industrial disputes of the 1970s were half a decade away, the systematic dismantling of Britain's heavy industrial base was still to come and therefore a story told from a manual labourer's point of view would have a wide and sympathetic audience. There would have been additional resonance from the plight of each song's protagonist since they both play on popular themes - little man against authority and man against machine (well, sort of).

Alternatively, they might be catchy, funny tunes performed by a man with a great talent for comedy.

Hole in the Ground

It's a familiar experience to most Brits; you walk out of your house and the street has been dug up. There might even be someone in or near the hole in the street and, likely enough, he will be leaning on a shovel and smoking a cigarette. This is how 'Hole in the Ground' begins. The man in the hole doesn't know why he's digging the hole where it is, nor what purpose the hole serves. He's quite content to dig, however, until he's interrupted by an officious man wearing a bowler hat. This suited and booted gent is of the opinion that everything about the hole, from shape and depth to position and function, is wrong.

This is a situation most of us are familiar with; we're doing a job we know well and someone who has never done the job before believes they know better. From this initial point of conflict, the song develops into a mild-mannered class war. Bernard Cribbins voices both roles; he gives the man in the hole an Everyman quality but endows the bowler-hatted critic with a distinctly City of London Gentishness. We all know the Bloke in the Bowler Hat - he's a middle to upper-middle class snob who thinks his position as a manager in some financial institution makes him an authority on the world in general. He's a man that believes leadership must come from the moneyed classes and that the lower orders cannot possibly get anything right unless they are being micromanaged.

The last line of the song, which reveals the fate of the hole and the Bloke in the Bowler Hat, is delivered with great satisfaction even though the resolution is rather grim.

The song's success can be attributed to several factors - it's simple, short and catchy. It's memorable. You'd be able to whistle the tune after hearing it. In the grand scheme of things that doesn't seem important (whistleability is not something the music industry worries about these days) but all of these things help the song lodge in the brain. It's also pretty clear that Bernard Cribbins is enjoying the story-telling role. The main 'selling-point' of the song is probably that it gives the listener his or her own small vicarious victory over pinstripe-suited Authority.

This song also deals with a common problem but in this case it's moving a large object into a room through a doorway that is much too small to let it pass easily.

In this vignette we're introduced to Fred, Charlie and the un-named narrator who are Removal Men. If you've ever moved house, they are the trio you dread turning up at the door to pack your household goods. They are the ones who will cheerfully crate the fishtank without taking the fish out. They are the ones who will bubblewrap the cat. Our heroes have been entrusted with moving something. On the face of it, not a Herculean task. We're not told outright2 what it is they have to move but from the description it's a piano3. The trio attempt to move the piano into an upstairs room and meet with no success. Their attempts are punctuated by tea and a bit of a think, each iteration of their problem solving process becoming more and more outlandish moving from simple attempts to make the piano smaller to dismantling things other than the piano.

The song lurches towards a tea and good intention-fuelled disaster with Fred, and later Charlie, providing the motivation while the narrator (very sensibly) sits back watching the whole thing unfold and making dry asides to the audience. So is this the classic tale of the irresistible force against the immovable object?

Fred and company are a very resistible force indeed and we can sympathise with them, to an extent, because the experience of trying to shift furniture is one everyone can relate to.

As with 'Hole in the Ground' the experience ends less than perfectly, with Fred falling victim to either incompetence or hubris depending on how you see the story unfolding.

Ted Dicks and Miles Rudge created the music and lyrics, already a well-respected team in the world of Revues (and already responsible for a previous Cribbins success, 'Folk Song') they would go on to work with other British comedy legends like Kenneth Williams and Dick Emery.

Of course any project needs a guiding hand. In this case, the producer of both hits was (the eventually Sir) George Martin, at the time single-handedly running the Parlophone label, on which the two hits appeared. Sir George, who also went on to have considerable success in the music industry thanks in part to his association with four young chaps from Liverpool, was able to devote considerable resources to making and promoting these novelty singles simply because there was no way the label as it stood at the time could compete with its larger rivals.

Bernard Cribbins was no stranger to musical success. Both 'Folk Song' and 'Gossip Calypso' were chart successes and good in their own right, but neither has stood the test of time in quite the same way as 'Hole in the Ground' and 'Right Said Fred'. Both these songs, whether because of the universality of subject matter or by some curious alchemy between the talents of Miles, Rudge, Cribbins and Martin, appear to have imprinted themselves on the conciousnesses of a generation.

1The title of this song was repurposed. It became the name of a band, who themselves had a novelty hit or two before going to work in Germany, where they are very popular.2There is a claymation video from the 1980s which shows the object to be a piano.3Although there is some discussion about what type of piano is, or is not, being moved