Extrasolar Planet Groundbreakers Content from the guide to life, the universe and everything 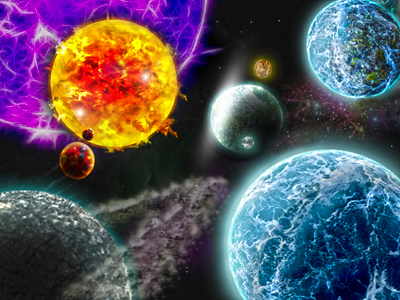 The Universe is infinite, composed of many worlds and animated by common life and common cause.
–  Fr Giordano Bruno  – On the Infinite Universe and Worlds (1583)

Since the dawn of time people have looked at the night sky. Many of them must have wondered what the twinkling lights were, until human knowledge advanced and someone named them 'stars'. Some cultures, like the ancient Egyptians, thought that stars were the souls of their dead pharaohs. Other cultures worshipped stars and gave them names. Ancient Greek philosophers mused about the existence of other worlds surrounding these faraway points of light. At times, people have suffered for their beliefs about the cosmos, because they were thought radical or revolutionary. Those who dared to speak out against religious doctrine were treated harshly; some, like Dominican Friar Giordano Bruno, whose quote opens this Entry, paid with their lives1.

Today our knowledge has advanced to the point that the Roman Catholic Church, who used to persecute astronomers and philosophers it considered heretics, have their own astronomers. Father Gabriel Funes, director of the Vatican Observatory near Rome, Italy, acknowledges: '[in the past] mistakes were made, but it is time to turn the page and look towards the future'. Advanced technology enables us to study the stars in multiple wavelengths, we can tell how old they are, how hot they are, what they are composed of and how far away they are. But can we tell if any of them have planets in orbit? The scientific community has developed many ways to search for planets outside the Solar System – such worlds are called extrasolar planets2. The search for extrasolar planets began in 1990 with the 305m Radio Telescope at Arecibo, Puerto Rico. This Entry catalogues the first findings.

The first success was muted3 when in 1992 Polish professor Aleksander Wolszczan discovered two planets, then a third, orbiting PSR 1257+12, an aged pulsar (rapidly spinning neutron star) in the constellation Virgo. A neutron star is what is left behind after a giant star explodes as a supernova. Any planets in the vicinity would not have survived the initial blast, therefore these worlds must have formed after the supernova. Scientists hypothesise that they were probably created from a debris disc, or they may be asteroids captured by the star's gravity post-supernova. All three 'pulsar planets' are very close to their parent star – their orbits would fit within the orbit of Mercury if they existed in our own Solar System. PSR 1257+12's three planets are called PSR 1257+12 b, PSR 1257+12 c and PSR 1257+12 d.

With these first scientific discoveries a new nomenclature system had to be devised. It was decided to use lower case letters beginning with 'b' after the star's designation for the first-detected planet, no matter if other planets in a closer orbit were subsequently discovered. In multiple stellar systems the stars are labelled with capitals, A, B, C etc, so a (hypothetical) planet around star 55 Cancri B would be called 55 Cancri B b. Five planets in orbit of star 55 Cancri A are called 55 Cancri A b, 55 Cancri A c, 55 Cancri A d, 55 Cancri A e and 55 Cancri A f. If two stars revolve around each other and a planet is circumbinary (orbits them both) like the Kepler-16A and Kepler-16B system, the planet takes both stars' designations, therefore it is called Kepler-16(AB) b.

The gas giant orbiting 51 Pegasi, designated 51 Pegasi b, was the first extrasolar planet found to be orbiting a main sequence (stable) star. The discovery of 51 Pegasi b was announced on 6 October, 1995. It caused immense excitement throughout the field of astronomy. The planet is extremely close to its star, a mere 7.5 million km (4.6 million miles) distant, so its year only lasts 4.25 days. Up till this discovery, extrasolar planet names only appeared in science fiction, like Kronos, the home world of the Klingon race in Star Trek. Strict protocol exists though, for the naming of objects when new scientific discoveries are made in real life. Up to the time of writing (March 2014) no extrasolar planet has a common name other than its nomenclature. That hasn't stopped the fanciful, however. Bellerophon has been the unofficial name for this planet, after the mythical captor of Pegasus, the constellation in which it resides, since its ground-breaking discovery.

The star HIP 11952 in Cetus is 12.8 billion years old, give or take a few million years. In 2012 two planets were discovered in orbit. They are likely several million years younger than their parent star because planets tend to coalesce from the star's debris disc, but that still makes HIP 11952 b and HIP 11952 c the most elderly planets yet detected.

Yellow dwarf star mu Arae has a family of four planets. Mu Arae c, discovered in 2004, turned out to be just six times the mass of Earth. Within our own Solar System there are two main types of planet – the gas giants which are very much bigger than the Earth (between 15 and 300 times as massive as the Earth), and the rocky planets that are much the same size as the Earth or smaller. Because Mu Arae c is only six times the mass of the Earth this planet was the first rocky terrestrial (now dubbed 'super-Earth') found.

The discovery of the smallest extrasolar planet up till then was announced on 10 January, 2011. Kepler-10 b is about three times the mass of Earth. Since the discovery of Kepler-10 b, another planet in the same system has been detected. Kepler-10 c is also a rocky world, estimated to be around seven times the mass of the Earth. At the time of its detection, it was the most massive rocky world yet discovered. They reside in the constellation Draco some 564 light years4 away.

The first planet detected orbiting a giant star was iota Draconis b in 2002. The star, Edasich, is over 100 light years distant, but it is visible to the naked eye as it shines at +3.3 magnitude. The gas giant planet iota Draconis b is a superjovian, at least 12 times the mass of Jupiter. It orbits Edasich at a distance which is well within that system's habitable zone.

The star Kepler-70 in Cygnus is nearing the end of its life, it has used up all its hydrogen and is now burning helium. Eventually it will shrink to a stellar remnant called a white dwarf. In orbit are two rocky worlds, extremely close to their star. Their orbits are in resonance5 with each other; while the inner planet, Kepler-70 b, takes ten orbits, the other, Kepler-70 c, completes seven, which means every tenth orbit of Kepler-70 b, approximately 2½ days as we measure time, they line up.

In the smallest constellation Crux the Southern Cross, a gas giant planet HD 106906 b orbits its star at 654 AU6. This is about 20 times the distance from our Sun to its outermost planet, Neptune. Such an extreme distance has not been encountered by extrasolar planet hunters before. The planet simply couldn't have formed that far away from its star, but there it is. Did some catastrophe in its past cause it to migrate away from the star? Or is there some other explanation for this unique world's extensive orbit? Doctor Who fans have petitioned to name the planet Gallifrey after the homeworld of the Time Lords, but that request likely won't be honoured by the IAU (International Astronomical Union) as the correct procedure wasn't followed7.

Multiple star systems are quite common throughout our galaxy. Kepler-16(AB) b was the first extrasolar planet discovered in a binary system. The stellar pair, Kepler-16A and Kepler-16B, revolve around each other, and the gas giant planet is circumbinary (orbits them both).

Kepler-47 is a binary system comprising a sun-like star (Kepler-47A) and a red dwarf star (Kepler-47B) which orbit each other in 7.45 days. There are two planets which orbit both stars, the first-known system of its kind. Kepler-47(AB) b is a super-Earth orbiting in just under 50 days, but Kepler-47(AB) c, a gas giant, is located within the habitable zone.

Beta Pictoris was found to have a surrounding outer, debris disc which extends more than 500 AU and an inner clear zone. Gas giant beta Pictoris b was detected in the clear zone in 2003 and subsequently directly imaged at the European Southern Observatory in Chile, making beta Pictoris b the first confirmed extrasolar planet to be photographed.

Fomalhaut is the brightest star of Piscis Austrinus. In 2004, 2006 and 2008 the Hubble Space Telescope imaged Fomalhaut's dust disc and a candidate planet was detected. The data wasn't confirmed until 2012, though, by which time beta Pictoris b had stolen the glory.

From a Galaxy far far Away

HIP 13044 b in Fornax is interesting because it is the first extrasolar planet which originated from another galaxy, now absorbed into the Milky Way.

Located in Andromeda, the gas giant planet HD 15082 b orbits its host star in 1.2 days. Also catalogued WASP-33 b, this 'hot Jupiter' was the first planet detected which belonged to a delta Scuti variable star.

PH1 is the first extrasolar planet discovered by 'citizen scientists' who participated in the search via the Planethunters.org website, an offshoot of the Galaxy Zoo project. PH1 is a gas giant which orbits two stars in a quadruple star system, 5,000 light years away in the direction of Cygnus.

At the time of writing, March 2014, the Extrasolar Planets Encyclopaedia has logged 1,780 extrasolar planets in 1,099 planetary systems, 462 of which are in multiple planet systems, and those figures are being increased all the time. There are people whose day jobs involve analysing the data of several detection systems. They are pinpointing extrasolar planets found in varied positions around all kinds of stars. We're awaiting the announcement of the discovery of alien life on an extrasolar planet not unlike Earth orbiting within its star's habitable zone. It shouldn't be too long now...

1Giordano Bruno (1548-1600) was sentenced to be roasted alive at the stake by the Catholic Inquisition for refusing to recant his beliefs about the Universe. Just under a decade later Galileo Galilei witnessed the first heavenly bodies orbiting a planet other than the Earth. This was strong evidence that the Earth was not the centre of things like the Bible said. Changing the order of things in the heavens was still considered blasphemous but at least Galileo, a friend of the Pope, was spared a horrific death. He just spent the rest of his life under house arrest and any publication of his work was banned.2Or just simply 'exoplanets'.3They didn't crack open the champagne.4A light year is the distance light travels in one year, roughly 5.88 trillion miles or 9.46 trillion km.5Three of the Galilean moons of Jupiter, Io, Europa and Ganymede, are in orbital resonance with each other.6AU means astronomical unit, the distance between Earth and the Sun  – 150 million kilometres or 93 million miles.7If you wish to nominate a name for an extrasolar planet, then you'll need to read these instructions carefully.