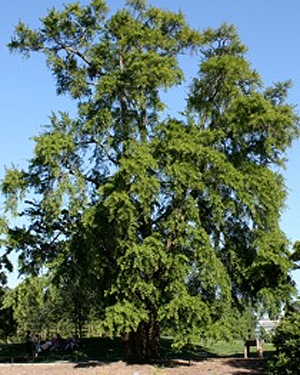 The maidenhair tree, also well known by its scientific name of Ginkgo biloba, is an 'Old Lion' of Kew Gardens: planted in 1762, it is a survivor of the original arboretum. At that time it was uncertain how hardy it was and so it was planted next to the wall of the great stove glasshouse, now long since gone. It is a male tree, and is known as a 'living fossil' because the species has lived unchanged for so long.

The maidenhair tree species is largely found in China, where the plants were cultivated around temples and monasteries and were considered sacred, the seeds having been used in Chinese medicine for centuries. The species was first introduced to the West in 1691 by the German botanist Engelbert Kämpfer. The trees have a long lifespan, many reaching ages of some thousands of years, being resistant to both weather and pest damage. In fact, one specimen was one of the few living things to survive the explosion of 'Little Boy', the atomic bomb that was detonated over Hiroshima on 9 August, 1945 - that tree survives to this day.

It is possibly one of the oldest species of tree still living, as trees are recognised these days, with fossils closely resembling this plant dating it back 270 million years1. It retains a number of features which could be considered 'primitive': its lack of flowers, using instead pollen cones and seed-bearing ovules; the unusual pattern of veins on its leaves; and the fact that it is dioecious, that is, having separate male and female plants. Other examples of similar plants from the same period include the Monkey Puzzle tree - Araucaria araucana, and the cycads, of which Kew has an example in the Palm house: Encephalartos altensteinii2.

The maidenhair tree is so named because of its distinctive leaves, which are fan shaped and resemble the maidenhair fern - Adiantum raddianum (an example of which can be found in the Princess of Wales Conservatory). The leaves are a vibrant green, turning a vivid yellow in autumn with a quick loss of leaves.

Apart from its leaves, other features of the species are its height, reaching 164 feet (50m), its longevity and possibly its many uses in the health trade.

Since the 1980s there has been a sudden increase in western medical interest in the plant, and dramatic claims have been made as to its medicinal properties. Most of its health properties are unproven, but have many adherents and believers. Its main perceived benefit is in memory enhancement, although it is also believed to be good for reducing the effects of ageing in the skin and circulation.

In traditional Chinese practice only the seeds of the tree, called bai gou are used. A tea is made from them, which is considered especially beneficial in treating asthma and other respiratory diseases. It was not until the 1950s that German researchers became interested in the leaf and began to examine its properties.

They found that the leaves contain unique substances called ginkgolides, which appear to prevent blood vessels constricting. They also reduce the clotting ability of platelets in the blood and help block the damaging effects of oxidation. All this improves circulation of the blood through the system, a direct result of which leads to Ginkgo biloba's main claim to fame - that of memory improvement. Impaired circulation of blood through the brain causes cerebral insufficiency, which manifests itself in poor concentration, confusion, absent-mindedness and even depression. Once the circulation of blood to the brain is increased, all these symptoms are improved or even resolved.

Scientific proofs of these claims, however, are hard to find. For every clinical trial backing up the claims, there is another showing them to be false. This hasn't stopped the herbal medicine industry from embracing the Ginkgo as a magic cure for many ailments. One Chinese website advertises: 'Ginkgo biloba leaf has mysterious effect on cardio-cerebrovascular' - a claim which is surely not very reassuring. Research is continuing, however, and this is evidently a herb that cannot be ignored3.

Ginkgo in the Landscape

Ginkgoes are an excellent choice for modern urban landscapes. Despite the suggestion of delicacy in the name, maidenhair trees are robust and quite resilient to pollution, which makes them fine street trees; although, with a height at maturity approaching 80 feet, they may be too big for the back yard. The distinctive fan-shaped, bright green leaves grow in clusters of three to five, each at the end of a long petiole; which gives the tree its characteristic shimmering quality. In the autumn, the leaves turn a rich and vibrant shade of yellow.

Young trees are quite slender and have a pyramidal profile, which broadens as the trees mature. The trunks grow tall and straight, with light brown bark that has shallow, darker furrows. The growth rate is fairly slow, comparable to that of most oaks.

Plum-like fruit is borne on female trees (a male tree is required to fertilize the female) after 20 years or so of growth. Although the fruit is eaten in Asia, where it is considered a delicacy, the odour is rather objectionable... actually, the smell is awful.

Nevertheless, the Ginkgo is a fine, stately tree that contributes handsomely to almost any large garden, park, or boulevard.

Please Note: H2G2 is not a definitive medical resource. If you have any health concerns you must always seek advice from your local GP. You can also visit NHS Direct or BBC Health Conditions.

1It is possible that the Wollemi pine may be older, although fossil records so far only date it back to 90m years. There's an example of this tree in Kew opposite the Orangery.2This particular cycad is recognised by the Guinness Book of Records as the oldest pot plant in the world, having been planted in 1775 and replanted a number of times since.3One should always bear in mind that herbal remedies are often potent medicines, and misuse can have very serious consequences.