The Ultimate Illumination Film Guide: 2015-2019 Content from the guide to life, the universe and everything 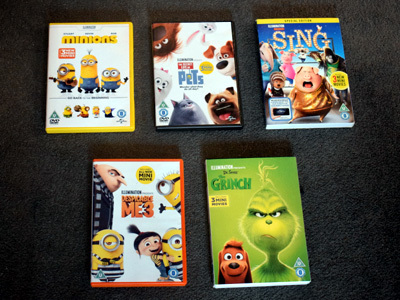 Illumination Entertainment, officially renamed Illumination in 2017, is an animation production company that was founded by Chris Meledandri in 2007 for Universal Studios. They hit instant success with their very first film Despicable Me and its sequel, Despicable Me 2. Despite this they could not rest on their laurels. Animation is a highly competitive business which has winners and losers. Animation studios such as Fox Animation Studios, Warner Bros. Feature Animation and ImageMovers had come and gone, with even successful studios like DreamWorks Animation facing an uncertain future. Illumination's challenge in this period was to turn their initial success with one film series into something greater, to become more than a one-hit wonder.

Below is a summary of the films made by Illumination in this period, with recurring characters and actors shown in Bold. Also mentioned is whether the films pass the The Bechdel Test. This can be summarised as whether the film involves two or more named female characters who have a conversation together that is not focused on men.

Minions was an incredible success on release, becoming the second-most successful animated film of all time, behind only Frozen (2013). The film has some fun cameos at Villain-Con, including Dr Nefario and El Macho from Despicable Me and even Gargamel from The Smurfs, with comic strip character Andy Capp appearing in the pub. Another clever touch is that Herb Overkill's carpet is the same pattern as that of the Overlook Hotel in The Shining (1980). Other cameos include the butler that appeared in Despicable Me 2 (2013) and an alley that would appear in The Secret Life of Pets.

Essentially the plot of Toy Story (1995) but with dogs instead of toys. Yet there is more than enough to keep eagle-eyed adult viewers watching, with references to films such as Alien, Saturday Night Fever and Some Like it Hot. The leader of the Flushed Pets group that is plotting an anti-human revolution is named Snowball after one of the two pigs in Animal Farm who lead the revolution against humans.

This film is essentially every single feel-good talent show in miniature, ending with a performance that really brings the house down. Though the plot is rather thin, that is irrelevant as it is about the rollercoaster ride of emotions experienced if you care about the characters. Garth Jennings had previously directed The Hitchhiker's Guide to the Galaxy (2005). The character of Ash the guitar-playing porcupine was inspired by Back to the Future and has many of the mannerisms of Marty McFly, as well as the ability to 'fire' her quills, which porcupines cannot do in reality.

This was the first film released as Illumination rather than Illumination Entertainment, with the letters spelling 'minion' highlighted to emphasise the studio's connection with their popular characters. Elsie Fisher no longer plays Agnes. At one point the Minions visit a theatre, which is hosting a Sing! show - other than the title, it has no connection with the earlier film of that name and does not feature recurring characters.

An outstanding animated adaptation that retells the classic story and rewards repeat viewings to catch the background details. This is the third adaptation of the tale with by far the least grumpy Grinch to date. While the story itself holds no surprises, it remains a heart-warming Christmas tale. Illumination have particularly excelled with the character of Max who, despite being silent throughout the film, says the most with his wonderful expressions. Illumination have certainly used the experience gained on The Secret Life of Pets to great effect.

Dr Seuss' The Grinch was the fourth most-successful film of the year, behind only Pixar's Incredibles 2, Disney's Ralph Breaks the Internet and Sony Pictures Animation's Hotel Transylvania 3: Summer Vacation.

The Secret Life of Pets 2 was the fifth most successful animated film of the year4 behind Disney's Frozen II, Pixar's Toy Story 4, China's Beijing Enlight Pictures film Ne Zha, and DreamWorks Animation's How to Train Your Dragon: The Hidden World. Patton Oswalt replaced disgraced voice artist Louis CK as the main character of Max. Though the plot is fairly predictable and not one of their stronger efforts, this sequel is full of cute animal action that should appeal to younger viewers. The Secret Life of Pets is Illumination's third series following the Despicable Me/Minions and Dr Seuss adaptations.