'Despicable Me 3' - the Film Content from the guide to life, the universe and everything 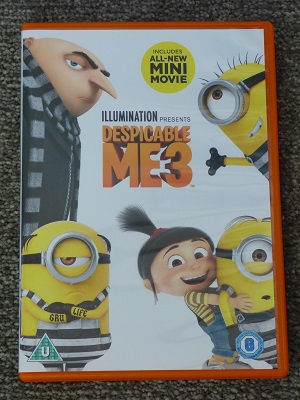 Following on from the events of Despicable Me and Despicable Me 2, this film sees unconventional hero Gru living a comfortable life as husband to Lucy and father to his girls Margo, Edith and Agnes. He and Lucy work together as agents for the Anti-Villain League. When their mission to capture a diamond thief fails, the new, ruthless boss of the Anti-Villain League fires them both. Lucy struggles to be a good mother to the girls, while Gru discovers he has a twin brother. Will Gru be tempted back to a life of crime, or will he be able to defeat the diamond thief and get his job back?

Lucy is loyal to Gru, standing up for him even though it means she loses her job when he does. Keen to be liked by the girls, she struggles to say 'no' to them and has to learn how to be a good mother.

The eldest girl, Margo, is studious, and protective of her sisters - she helps Lucy to be a good mother to them and appreciates Lucy's motherly love, too. Middle child Edith enjoys playing pranks on people and still likes the colour pink. The youngest, Agnes, is thoughtful, selling some of her toys to earn money for the family after Gru and Lucy have become unemployed. After her beloved fluffy unicorn toy goes to a new home, Agnes goes on an adventure to find a real unicorn.

Diamond thief Balthazar Bratt was a child actor from the 1980s who starred in his own TV show - his catchphrase was: 'I've been a bad boy!' The show was cancelled when Balthazar hit puberty, so he wants revenge on Hollywood and plans to build a laser using the largest diamond in the world.

The Minions are small and capsule- or dome-shaped. They have two arms and two legs, and they are all yellow. Some have two eyes, and some have just one eye, but they all wear goggles. Some are taller or wider than others and they have varying amounts of hair on their heads, ranging from nothing to several short strands. Disappointed that Gru is no longer villainous, they decide to go on strike and find something better to do. Only Mel remembers Gru's kindness.

Steve Carell, known for films such as Evan Almighty (2007), and the US version of Ricky Gervais' UK sitcom The Office, plays Gru with a European accent that sounds like a blend of Spanish and Russian with a dash of other languages to make him speak like a composite 'Bond villain'. He also plays Dru, with a similar accent but a happier, more excitable voice.

Kristen Wiig plays Lucy as a down-to-earth young woman who wants to do her best for her new family. Before Despicable Me, Kristen had various small roles in films and TV shows, but played several characters in the comedy series Saturday Night Live. She voices Ruffnut Thorston in the animated film series How to Train Your Dragon (2010-19).

Margo is played by Miranda Cosgrove. She voiced Lana Lang in the pilot episode of Smallville in 2001, appeared in the film School of Rock (2003) when she was 10 and provided voices for animated characters in the Scooby Doo and Lilo and Stitch TV series before being chosen for the role in Despicable Me. The part of Edith was the first role for Dana Gaier. Eight-year-old Nev Scharrel replaced Elsie Fisher (who was 14 in 2017) as the voice of Agnes - she also had a cute laugh and was able to convey Agnes' innocent determination to get what she wants.

Comedian Steve Coogan is best known for his role as Alan Partridge, who started life as a news reporter from the comedy TV series The Day Today (1994). Since he first took the role of Silas Ramsbottom, the head of the Anti-Villain League, he has starred in films such as Philomena (2013). Renowned actor and singer Julie Andrews again has a brief cameo as the voice of Gru's mother.

The Minions are voiced by director Pierre Coffin - they speak in a squeaky way with a French accent, and have their own dialect incorporating occasional recognisable English words. They sing well when they are in prison and also after they escape, when they accidentally find themselves on stage in the Sing! TV talent show1.

An important theme is that the film was made to be shown in 3D. This influences the look of the film - for example, Gru has a long, pointy nose, the Headquarters of the Anti-Villain League include a vast amphitheatre-style room, and Balthazar Bratt's lair has a passageway lined with robotic dolls that swarm out towards the viewer, that would all look particularly good through 3D glasses.

Humour of various kinds is also important in the film, so that there is something for everyone to enjoy, from basic toilet humour (we see a prisoner on the toilet who is swept along when the Minions break out of jail), to comedy that would be appreciated more by adults than children, such as when Gru and Dru go out and get drunk together, then have to face Lucy when they get home.

There is cartoon violence - people get shot at once or twice, but escape with nothing worse than darts sticking in their skin like needles. The film displays fascinating attention to detail - for example Dru's house on a pig farm in Freedonia2 contains a ceiling painting 'like the Sistine Chapel, but with pigs', and one scene includes a visually impaired person with a Guide Pig instead of a Guide Dog.

A highlight for adults who were born in the 1980s, or who lived through the decade, is to look out for all the '80s references. Balthazar Bratt3 plays cassette tapes of classic songs such as 'Take On Me' by a-ha. He wears a shell suit with shoulder pads, sports a mullet hairdo and wears legwarmers when he is working out. He has a Rubik's Cube-shaped weapon and uses super-sized pink bubblegum to trap his opponents. He even uses a catchphrase from the TV show The A-Team: 'I love it when a plan comes together.'

As with the other films in the series, a key theme is that the story is not a classic tale of good versus evil. Ex-villain Gru is pitted against another villain, and even opposes his own boss. Other characters have similar depth, too, such as Edith being supportive of her family but also indulging in rather vicious pranks against their butler. The main theme of the plot is about family, including motherly love and brotherly love. Lucy may not know quite how to react to the girls as a mother, but she instinctively protects them like a mother. Gru is pleased to have a brother after years of thinking he was an only child, but finds there is an element of sibling rivalry. He envies Dru and struggles with their personality differences, but finds out how similar they are in other ways.

Despicable Me 3 was released on 3D Blu-Ray and DVD in 2017. Extras include 'behind the scenes' footage, comic sketches featuring the Minions, and 'singalong' music videos featuring the voice of Pharrell Williams.

1A reference to Illumination Entertainment's film, Sing! (2016).2A fictional country that was also the setting of the Marx Brothers film Duck Soup (1933).3Whose name is a nod to Benjamin Bratt, who played Despicable Me 2's villain El Macho.