The 1980s - Fashion Content from the guide to life, the universe and everything 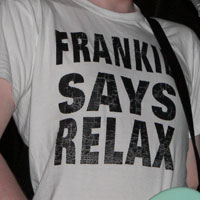 Fashion has always been a way for the young to reinvent the fashions of previous generations and reclaim them as their own. The fashions of the 1980s stole from almost every era: the make-up of Ancient Egypt or Elizabethan England; the mishmash of Victorian buccaneers and Native Americans; 1960s minimalist chic and 1950s rockers1.

In the early 1980s, as with the previous two decades, much of what might be called 'fashion' by British city-based journalists never reached the provinces. Club-goes might have felt brave enough to 'gender-bend' or join the 'New Romantics' in London, Sheffield, Birmingham and Liverpool, but such trends rarely thrived in Southport or Aberdeen. While Carnaby Street heralded a new Renaissance for those with a skill for turning old rags into evening wear, such extravagance was unlikely to have allowed the wearer to survive a stroll through Newcastle.

Perhaps surprisingly, British fashion did make a huge impact across the Globe; the infamous Flock of Seagulls 'Batman' cut had its imitators on the club scenes of New York, while Boy George became a megastar in Japan and even made a memorable guest appearance in the über-macho action series The A-Team.

Outlandish experiments like tartan kilts or headbands soon gave way to the conservatism that, at least politically, the decade was renowned for. Spandau Ballet began to wear jazz suits with huge waved hair-cuts sprayed into place and dressing smart came back into style for boys and girls alike.

As the decade progressed, American designers began to get their revenge thanks to the pastel shades and designer stubble on show in the TV programme Miami Vice: Luminous green, yellow or pink socks worn with pale blue or yellow suits, the arms of the jackets rolled to way above the wrists; a simple t-shirt worn underneath; and the final crowning glory - a haircut gelled to perfection, long at the back and with a quiff at the front. Yes, the 1980s saw the dawn of the hairstyle loved by Florida detectives and Mancunian footballers alike - the mullet!

For women, the only deciding factor on what to wear was - make it big! Hair was big. Fingernails were bright red and big. Jewellery was big! Shoulder pads were very big! Thanks to the glitzy glamour of Dynasty, and in particular the designers for Joan Collins and Linda Evans, suddenly everyone was expected to dress like a diamond-studded Barbie doll with added bitchiness.

If you couldn't afford to subscribe to oil-wealth designs, then thank the Lord for Madonna, the saviour of normal women everywhere, who taught us all how to accessorise. Whether it was lace gloves and rag head-scarves or huge crosses on necklaces and pixie boots, college girls around the world followed her lead and looked to her to continue to reinvent herself periodically and set trend after trend. Against all expectations, it's something she continues to do nearly 20 years later.

Stretch black pants, a thousand neon and black 'O' rings on my wrists, big dangle earrings(heart shapes mostly), teased hair with one part drooping over my right eye, tank tops layered with see-thru lace blouses or mid riff tops ( which I changed into at school so my mom wouldn't see me), bubble gum - always! - and too much attitude!

In 1984, Katharine Hamnet introduced stark white T-shirts with bold black slogans on. Initially taken up by pressure groups to declare the wearer's opposition to cruise missiles or abortion, the world of pop swiftly adopted the look as their own. Wham! wore 'Choose Life' slogans for their 'Wake Me Up before You Gogo' pop video, mistaking the pro-life message for simple optimism and of course, Paul Morley, the spin-doctor journalist hired to hype Frankie Goes To Hollywood, set the trend by adopting Hamnet's slogans to read 'Frankie Say No War' and other simplistic slogans2.

As the decade drew to an end, the leather jackets, white t-shirts and turned up jeans of the 1950s - as sported by Marlon Brando and James Dean - soon made a welcome comeback. Unfortunately, they were worn by... Bros, whose sole original contribution to fashion was the addition of bottle stoppers from a certain type of beer clipped to their boots. Oh the shame!

Women, meanwhile, decided to wear as many colours at the same time as possible. Skirts and jeans became circulation-cuttingly tight, while tops became baggy and less revealing... blonde highlights in their hair were, of course, an essential.

I remember going out wearing those skin tight jeans and refusing to drink all evening - I knew if I had to go to the loo I'd never get them back on! We would sew the legs as tight as possible so you had to pour yourself in, and lie prone on the floor to zip them up. Even the slightest hint of loose fabric was deemed to be 'flares'. They were so uncomfortable!

And above and below the jeans, of course, the clothes and shoes had to match. everything was, for a brief, dreadful period, colour co-ordinated. Pastel tops, shoes, hair clips the lot.

For a while I did the whole suit jacket with a complement of rock and punk band pins on the lapels, button down white shirt, skinny black tie, sunglasses, fedora-style hat and baggy pants. Then I gave it all up for a type of grunge look (before grunge really took off) complete with the long pony-tail and combat boots... I don't know which look was worse - the first was silly, the second was just ugly.

Here are just a few examples of the kinds of things h2g2 Researchers were wearing in the 'Decade That Taste Forgot'... prepare to laugh and point:

Long sweaters with belts for dresses (or worn over stretch pants) Layers of 'slouch' socks or legwarmers worn with just about anything, frilly socks worn with high heeled shoes, denim..denim everything! And the Bedazzler! Anyone remember the bedazzler? It was that do-hickey used to put rhinestone studs on anything denim. Man... I'm glad the '80s are over.

1One era that you probably wouldn't see mirrored, though, was the 1970s. Despite the insistence of some, flares didn't come back until the late 1990s.2Pirate versions of the garments were seen soon after declaring 'Who gives a f*** what Frankie say?'