'Minions' - the Film Content from the guide to life, the universe and everything 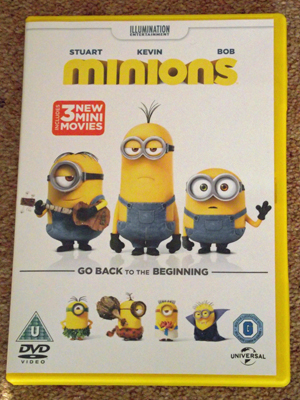 Minions is a CGI animated film by Illumination MacGuff. It was released in 2015 and is the third film in the Despicable Me franchise. Rather than being a sequel, it is a prequel, explaining how the Minions came to be Despicable Gru's evil henchmen. It was directed by Pierre Coffin and Kyle Balda and was made in France. It was a collaborative production between the USA and Europe and features music by Heitor Pereira as well as classic pop by The Beatles and others. It was released in 3D as well as 2D format.

Made at a cost of $74 million, Minions earned less than Despicable Me 2 did in US cinemas but accrued over $1,000 million worldwide, gaining it a place among the most successful animations of all time.

In Despicable Me it was explained that the Minions were all clones from a genetic experiment, although some mutation occurred so they each have a slightly different appearance. However, in this film, we find that the Minions evolved out of the sea and their purpose in life is to serve an evil master1. The start of the film is a nature-documentary-style romp through time - we see the Minions follow a fish, until the fish is eaten by a bigger fish, and they evolve until they serve a Tyrannosaurus Rex, before finding a prehistoric man, then a pharaoh in Egypt, a vampire in the Dark Ages, and finally Napoleon in Russia where they get the blame for the failure of his campaign and are exiled to the North Pole.

Able to fend for themselves, they survived for some years but felt empty without a master to serve, so an intrepid Minion called Kevin resolved to venture out and find a villain. He was soon joined by Bob, who excitedly volunteered, and Stuart, who was volunteered by the Minions around him2.

Outside their lair, it is 1968 and the three Minions find their way to New York where they find blue dungarees to wear instead of the thick fur coats they had needed at the North Pole. Next they hitchhike to Orlando, Florida, for the International Villain Convention. There they see a young Dr Nefario advertising the Freeze Ray that would later be used by Gru in Despicable Me. They also encounter Scarlet Overkill, the first female supervillain, and accidentally win the contest to become her new henchmen - she needs them to help her travel to England and steal the crown of Queen Elizabeth II.

The Minions are all yellow and dome-shaped with two arms and two legs. Some have two eyes, and some have just one eye, but they all wear goggles. Some are taller or wider than others and they have varying amounts of hair on their heads, ranging from nothing to several short strands. They wear different outfits in different eras, ranging from a few green leaves to animal skins to fur coats and then the blue dungarees that became their classic image in the other two films in the franchise. In this film, they are all voiced by director Pierre Coffin3 - the Minions speak in a squeaky way with a French accent, and have their own dialect incorporating occasional recognisable English words.

Scarlet Overkill is a glamorous villain married to the dandyish (and similarly evil) Herb. Surprised by the Minions winning her contest, she is vengeful when the Minions accidentally obtain the crown for themselves even though King Bob quickly offers to hand it over to her. Sandra Bullock, the star of Miss Congeniality and numerous other action comedy movies (some less successful than others) is well cast as the menacing yet blunder-prone Scarlet. Sharp-suited Herb is voiced by John Hamm, the star of the hit TV series Mad Men.

Gru has a cameo at the end of the film, to link in with the events of Despicable Me, and he is again played by Steve Carell, who is known for films such as Evan Almighty, and the US version of Ricky Gervais' sitcom The Office. Steve Coogan, best known for his role as Alan Partridge, who started life as a news reporter from the comedy TV series The Day Today, had a cameo role in Despicable Me 2 and also provides voices for two minor characters in this film. Star of Absolutely Fabulous and the other half of French and Saunders, Jennifer Saunders takes the role of the young Queen who won't give up without a fight when her crown is threatened.

The film is rather dark at times, as there is cartoon violence of a permanent kind. In the Despicable Me films, when characters are subjected to extreme conditions, they bounce back. However, in this film, when the Minions' villainous masters fall off a cliff or get crushed, they don't recover. The Minions are still robust, though - there is a moving scene where they sing 'Taps' when they think they have lost one of their number, but the sorrowful song turns to joy when he reappears.

Humour of various kinds is important in the film. There is something for everyone to enjoy, from basic toilet humour when a Minion uses water to extinguish a dynamite fuse, to comedy that would be appreciated by adults, such as when the Minions emerge from the sewers on to Abbey Road just as The Beatles are crossing.

Another strong theme is that the film was made to be shown in 3D. This influences the look of the film - for example, there is an epic view of New York that would look particularly good through 3D glasses, and camera shots from the balcony of Buckingham Palace are also impressive. Consideration of 3D effects influences the scenes that are included, such as the Minions swinging on a chandelier, and the end credits feature the Minions blowing bubbles and playing rock music while the other characters file past and approach the camera.

The film displays fascinating attention to detail - for example when the Minions are in a shopping centre, they see classic 1960s programmes  The Saint and Bewitched on a TV. The Minions also travel on the London Underground and visit the House of Commons. The backgrounds are rich in detail, too - cobbled streets are realistically portrayed, and inside Scarlet Overkill's home we see that she has stolen a variety of artefacts from around the world including the Ancient Greek 'Discus Thrower' statue, Michaelangelo's 'David' and one of Andy Warhol's 'Campbell's Soup Cans' paintings.

The soundtrack (which was made available by Back Lot Music) is another key element of the film. There is some classical music including 'Rule Britannia' and 'Pomp and Circumstance' that set the royal scene, but the classic 1960s pop songs also fit in well with the storyline, such as 'Happy Together' by The Turtles at the start of the film, then 'You Really Got Me' by The Kinks when the Minions are captured, and 'Hey Hey We're the Minions' (adapting the theme from The Monkees' TV series). One of the songs played over the end credits is 'Mellow Yellow' by Donovan - very apt to describe the Minions once they've found their new villain, Gru.

1And eat bananas.2Out of all the Minions, Bob, Kevin and Stuart also have strong roles in Despicable Me and Despicable Me 2.3In the previous two films, fellow director Chris Renaud had also provided some Minion voices.